Cyclone, that sounds kind of brutal, don’t you think? A single-eyed
giant, trampling behind a fleeing group of dwards with the ground
trembling.

Well, that’s not too far from reality in fact, although that you
seem to mix up cyclone with cyclops. The word cyclone is derived from
cyclonal, meaning counterclockwise rotation. So now with my first
posting it’s for me to explain:

What is a cyclone?

Basically, a cyclone is a tropical storm with a certain wind speed. The
strength of a cyclone is defined by the speed, the wind is blowing your
roof away. Does this wind blow with more than 73 mph, and is the system
born off Australia or the Indian Ocean, then this is what you call a
cyclone. Has it formed over other oceans, it would be called a typhoon
or hurricane. The difference between all these powerful candidates is
solely their place of origin.

How exactly a cyclone forms is not yet known by every detail. The first
jerking though, that the ball gets rolling are probably irregularities
in a wind band in the upper atmosphere known as the “jet stream”. These
irregularities creates waves, just like when you tip your toe into a
calm lake.

These (air-)waves propagate northeastwards within the cyclone season
from April on. Sometimes, these disturbances lead to thunderstorms,
that are transported by trade winds.

Trade Winds? What Was That Again…

Your first association with “Trades” is your personal stock portfolio?
Or is there something flickering from your geography lessons? Very
briefly, trade winds arise because the air in the tropics rises up and
drops down again in the subtropics. 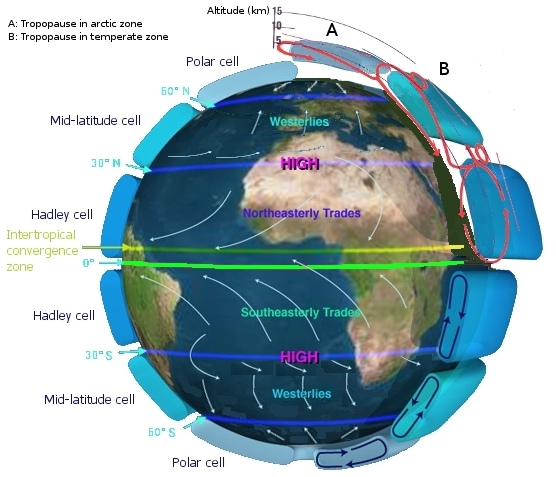 Maybe this headline sounds a bit melodramatic, but if you take
the very meaning of the word, this is really what you can call it.
Because this is the first of several stages of development of a cyclone.