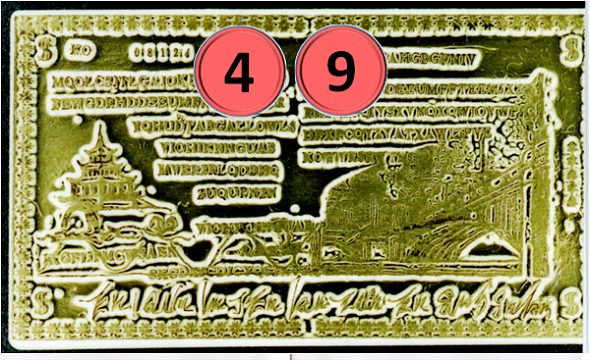 Seven Chinese goldbars  from the 1930s bear encrypted inscriptions that have never been deciphered. The provenance of these goldbars is a mystery, too.

In 1996 the curator of a US museum contacted the International Association for Cryptologic Research (IACR) and asked for help with a set of unsolved cryptograms. As it seems, this museum curator didn’t know that the IACR rarely deals with old ciphers, as it focusses on computer-based cryptology. It might have been better to contact the scientific magazine Cryptologia, which has its focus on the history of encryption, or the American Cryptogram Association (ACA). Today Klausis Krypto Kolumne would be the best choice for a cryptogram like this, but this blog didn’t exist back then.

The cryptograms in question are inscribed on seven Chinese goldbars. The details about this mystery are given on a IACR web page prepared by former IACR president Kevin McCurley. McCurley writes:

The seven gold bars were allegedly issued to a General Wang in Shanghai, China, in 1933. These gold bars appear to represent metal certificates related to a bank deposit with a U.S. Bank. The gold bars themselves have pictures, Chinese writing, some form of script writing, and cryptograms in latin letters.

Not surprisingly, there is a dispute concerning the validity of the claim for the deposit. It may help to resolve the dispute if someone can decipher the cryptograms on the bars. Nobody has yet put for the a theory as to their meaning. I am also unable to recognize the script writing. The Chinese writing has been translated, and discusses a transaction in excess of $300,000,000. It also refers to these gold bars which weigh a total of 1.8 kilograms.

Here are photographs of the goldbars: 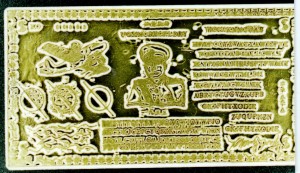 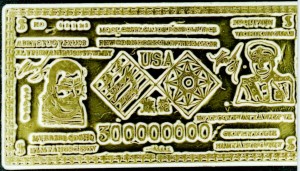 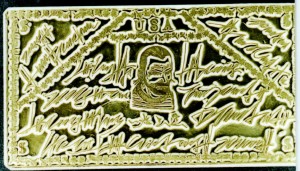 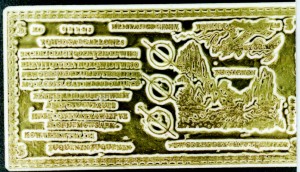 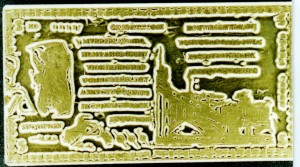 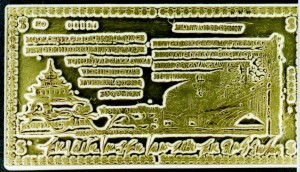 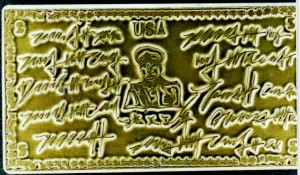 The inscriptions contain 16 encrypted lines, some of which are repeated:

As far as I know, nobody has ever found out what these lines mean.

McCurley’s article seems to be the only source of information available about the Chinese goldbar cryptograms. This mystery is mentioned on many websites and top 10 unsolved ciphers lists, but noone seems to know more than is mentioned on the IACR page. At least, this article names two contact persons – some Bin J. Tao and a lawyer named Peter Bisno, both located in California. No email or web addresses are given (which was not unusual back in 1996). Two fax numbers are listed, but the inquiries I sent to both of them were never replied. Nick Pelling, who contacted Peter Bisno by email (with an address he had found somewhere else) was a little more successful. He received the following note: “We no longer represent the client and closed our file a long time ago. We have no further information. Sorry.”

Blog reader roel pointed me to a Chinese newspaper article, which is now offline. I couldn’t read it, as I don’t speak Chinese, but according to some hints from my readers, the article told more or less the same story as the IACR website.

Nick Pelling pointed out that the airplane shown on one of the goldbars looks quite modern for the alleged issuing year 1933. 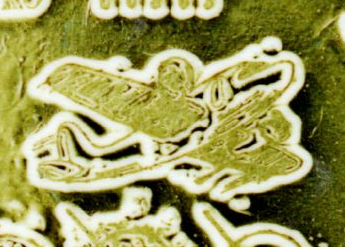 Can a reader identify this aircraft? Did this model already exist in 1933?