Today I’m presenting a 24 letter message that has been encrypted with a Playfair cipher. Such a short Playfair cryptogram has never been solved before.

In December, I reported on Konstantin Hamidullin’s solution of a Playfair challenge I had published four weeks earlier. With only 26 letters, this cryptogram is the shortest Playfair message that has ever been broken.

Konstantin’s deciphering success was already the fifth Playfair world record set by my blog readers. Here are the four previous ones:

In all of these cases, a Playfair cipher with a random matrix (i.e., not based on a keyword) was used. US cryptanalyst Alf Monge broke a 30 letter Playfair back in the 1930s, but this one was keyword-based, which made things easier.

According to George Lasry, the unicity distance for a Playfair cipher applied on an English text is 22. This means that a ciphertext of 22 letters or shorter does not have an unambiguous solution. If the ciphertext is longer, a unique solution exists and can be found – at least in theory.

Hill climbing appears to be a good method for breaking a Playfair encryption. George, Nils, and Magnus used this technique for their record-breaking cryptanalysis successes. Their work has considerably improved the hill climbing methods applied in codebreaking. To my big surprise, Konstantin didn’t use hill climbing when he set the current record. Instead, he conducted an exhaustive search with several optimizations. Each solution candidate was checked with a fitness function. 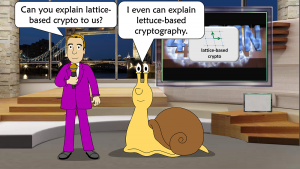 I’m sure that meanwhile most readers of this blog know how the Playfair cipher works. For those who don’t, this section gives an introduction.

After my 26 letter ciphertext had been solved by Konstantin Hamidullin, I created a new challenge based on an even shorter message. This time, I chose a ciphertext consisting of 24 letters. As usual, I used the Playfair function of the software CrypTool for encryption.

Here’s the ciphertext I received:

Can you decipher this message? If so, you will set a new world record.

Edited to add: The ciphertext I presented first (BZR…) was wrong. It contained a J, which is not possible in the standard Playfair cipher.
Follow @KlausSchmeh