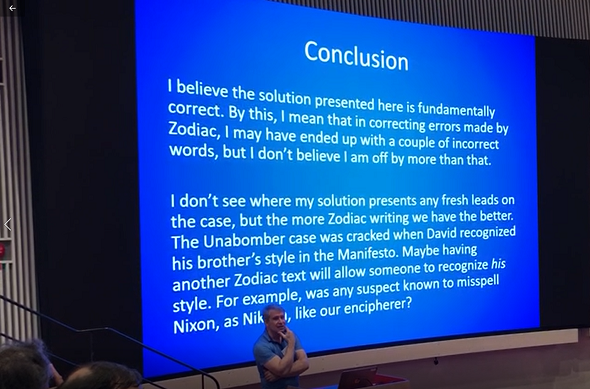 At the HistoCrypt in Uppsala, Craig Bauer gave a talk about famous cryptograms. Among other things, he defended his solution of the second Zodiac Killer cryptogram, which was heavily criticized by the readers of this blog.

First of all, let me say hello from Uppsala, Sweden, where the HistoCrypt 2018 is currently taking place. I have the honor of being a member of the steering committee of this event.

55 people are attending HistoCrypt 2018, including many readers of this blog, like Norbert Biermann, Armin Krauß, Jerry McCarthy and George Lasry. Already on the first day, I heard several talks that inspired me to blog posts I might write in the near future. Program chair Beáta Megyesi and her team are doing a great job in organizing this event.

The most important message of HistoCrypt 2018 is that crypto history research is making progress. More and more skilled people get involved in this field, while new research areas are explored and new infrastructure is developed.

My two contributions to this year’s HistoCrypt, apart from committee work, are a presentation I will give about codebooks/nomenclators and a poster I have presented today. I will write more about this in a later post.

The current HistoCrypt is mainly a scientific event, but it has been decied that next year’s issue will be extended. Especially, it will feature a presentation track for people without a scientific scope. So, if you are a crypto machine collector, a crypto history book author, a journalist with an interest in crypto, a Voynich Manuscript enthusiast or just an interested reader of this blog, please consider handing in a presentation proposal. The application process for this track will be simple and you will not be required to write a paper for the conference proceedings. The speaking proposals will not be evaluated based on scientific considerations but on the attractivity of the topic and the competence of the lecturer.

In case you are more interested in a publication with a high scientific value, you still can hand in a research paper.

In my view, the highlight of the first conference day was Craig Bauer’s presentation about famous unsolved and solved cryptograms based on his latest book Unsolved! (this book, which is written in English, has a similar content as my German book Nicht zu knacken).

As readers of this blog might remember, Craig published a solution of the second Zodiac Killer cipher when he appeared in a History Channel documentary last year. Many crypto experts criticized him for this because they believe that this solution is not correct.

As can be imagined, many attendants were excited about whether Craig would address his Zodiac Killer solution in his talk. In fact he did. The Zodiac Killer story even filled 18 minutes of his 45 minutes speech. I recorded this part of the talk with my smart phone, Craig agreed that I publish this video on my blog. Here it is:

According to Craig, the Zodiac Killer used a substitution cipher with backwards homophones (i.e., there might be several ciphertext letters that stand for the same plaintext letter, and there might be several plaintext letters that stand for the same ciphertext letter). In addition, Craig thinks that a part of the cryptogram is simply gibberish, which is the reason why frequency analysis and other codebreaking tools don’t work very well on the message.

Of course, it would be nice to have a research paper about Craig’s solution published in Cryptologia or another scientific magazine, but Craig said that he is currently not working on such a publication.