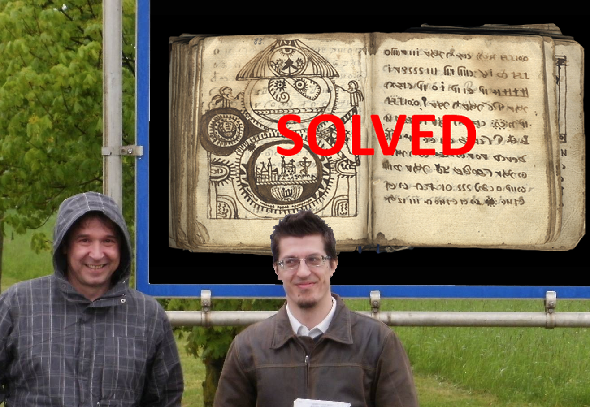 The Rohonc Codex, one of the world’s most famous crypto mysteries, appears to have been solved. Here are the details about the solution.

Here is the second part of my FAQ about the recently published solution of the Rohonc Codex.

Who has deciphered the Rohonc Codex? 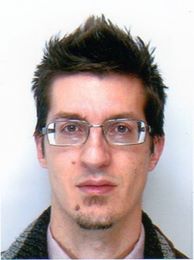 … was born in 1976. He earned a BSc in computer science and an MA in divinites. He is currently working as a software developer. He has occupied himself with the Rohonc Codex as a hobby since 2005. 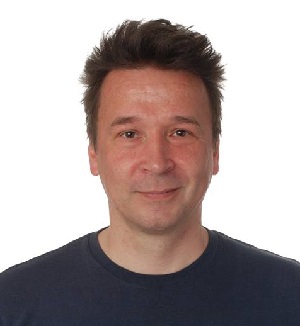 … born in 1969, is an archaeologist and art historian. He has worked at the Hungarian National Gallery in Budapest since 1999. Tokai has dealt with undeciphered scripts from the age of sixteen.

Király and Tokai started their research on the Rohonc Codex independently from each other. The two met at a conference in late 2010, where Király summarized his results in a lecture. Having acknowledged common results that they had reached independently, they decided to work together. The following picture was taken in Rechnitz (Hungarian: Rohonc), Austria, the town the codex is named for. 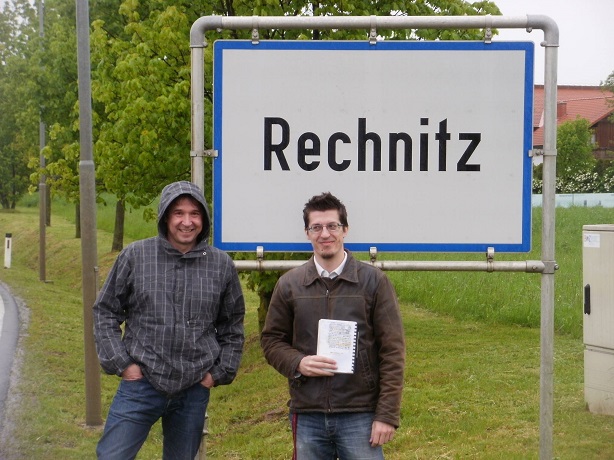 What kind of encryption method was used?

Codes (especially nomenclators) were quite common in the 16th century. It is therefore not surprising to encounter a code-based encryption in a 16th century document. However, I have never heard of a complete book encrypted this way, let alone one that is 500 years old.

Király and Tokai’s paper doesn’t mention the language the cleartext is written in. They plan to address this topic in a future publication. It is generally possible to read a message written in code without knowing the cleartext language, as long as the meanings of the code words are known.

In addition, Király and Tokai don’t mention if the author of the codex used the code for secrecy or for another reason. I hope, future publications of the two will address this question, too.

As the pictures (most of them show scenes from the bible) suggest, the content of the Rohonc Codex is Christian in nature. Király and Tokai have found several prayers, Bible stories, and Bible quotes. Most of the text refers to the New Testament. It is an interesting, yet unanswered question why a text of this kind (as far as can be told so far, it doesn’t contain any secrets) was encoded in such a way.

How did Király and Tokai decipher the Rohonc Codex?

Already before Király and Tokai started their work, the two researchers Ottó Gyürk and Miklós Locsmándi had identified numbers in the Rohonc Codex. These numbers follow a system similar (but not equal) to the Roman numbers. The one of this number system is represented by a vertical line. In the following picture seven ones in a row can be seen. 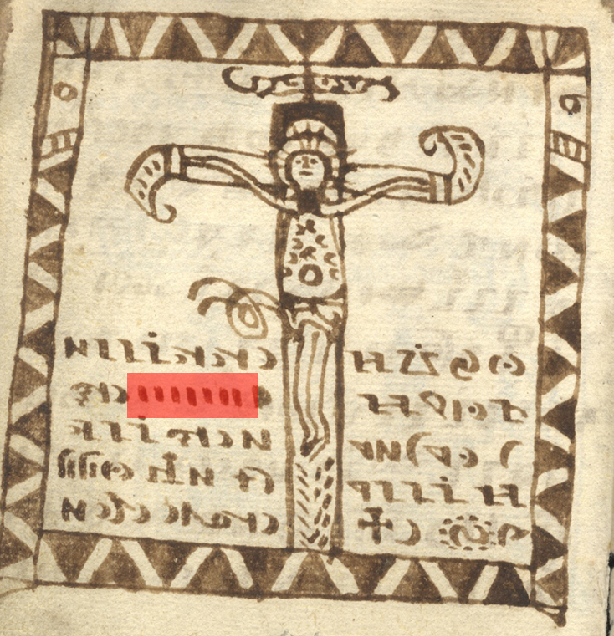 Apart from the numbers, Király and Tokai used words written in the pictures as cribs.

Finally, the codex’s literal quotations from the Bible proved helpful for breaking the ciphertext. Király and Tokai consider these quotations as a kind of Rosetta Stones of the Rohonc Codex. For instance, knowing the code word for “give” and having a conjecture about the code word for “tree”, Tokai could identify a passage in the codex as Matthew 7:17–18.

Based on this findings, Király and Tokai could decipher considerable parts of the Rohonc Codex.

No. Király and Tokai make clear that the present state of their research project is not marked by finished research. They say that it is likely that the code will never be completely broken (this is not uncommon, as the meaning of some code words cannot be derived from the context).

Király and Tokai now hope for help from specialists of other disciplines—such as linguistics or historians. This is why they have decided to publish their findings the way they currently are.

Király and Tokai plan to publish further articles, in which they plan to describe the content of the cleartext, as well as the morphology, syntax, and peculiarities of the code. The possible language(s) of the author will be addressed, too. They will also provide a detailed table of contents, further indices, and a glossary.

Is Király and Tokai’s solution correct?

To be honest, it is hard for me to judge whether Király and Tokai’s solution is correct. I am a crypto expert, not a linguist. However, I know that Cryptologia has high proof-reading standards (I am a member of the magazine’s editorial board and I occasionally do proof-readings) and that Craig Bauer, the editor-in-chief of Cryptologia, is an experienced cryptogram expert who would certainly not publish a non-substantial solution.

In addition, I know that Rohonc Codex expert Benedek Láng has followed the path of Király and Tokai’s solution in the last 8 years and that he has read the article very carefully. He thinks that the solution is correct.

All in all, I put a fair degree of trust in this solution.

I hope that future publications of Király and Tokai will reveal more details about the solution and that more experts will state their opinion about it.
Follow @KlausSchmeh