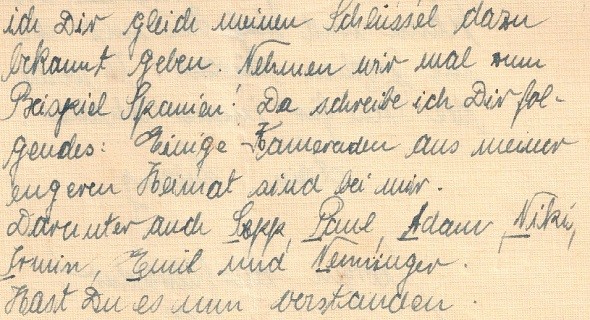 How to tell your loved one where you are, if you are a soldier and not allowed to mention your whereabouts in your letters? A German soldier in the Second World War came up with a steganographic technique.

Tobias Schrödel, whom many readers know as a comedy hacker and collector of encrypted postcards, has provided me a beautiful example of steganography. The steganographic method in question is described in a letter written by a German soldier in 1940.

A letter from Brno

The sender of the letter was named Otto Gamber.

Apparently, Gamber was stationed in Brünn (Brno), a city today located in Czekia. His home place (or at least the place were his spouse lived) was Niederlustadt, a village near Germersheim, Germany. Today, this place is located in the federal state of Rheinland-Pfalz.

Otto Gamber’s spouse, who was the recipient of the letter, … 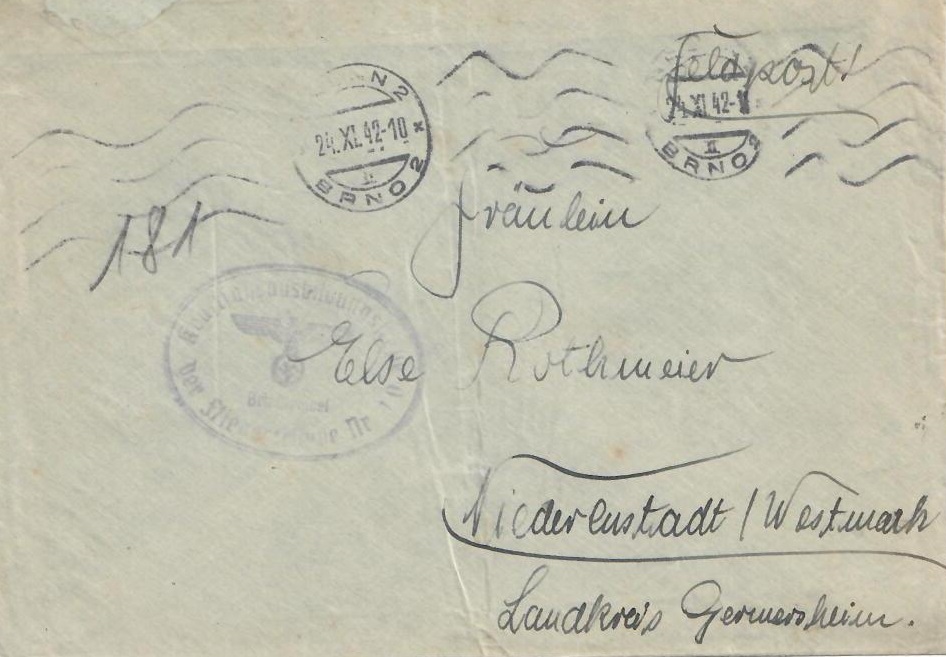 … was named Else Rothmeier. The title “Fräulein” indicates that the two were not yet married.

A secret message based on an acrostic

According to the letter, Gamber expected to be relocated to a different place, soon. Usually, a soldier in WW2 was not allowed to mention his current location in a letter to his family – because this information might have fallen into the hands of spies. Otto Gamber was aware of this, so he came up with a steganographic system. Here’s his description of it:

Here’s a translation (note that the German word for “Spain” is “Spanien”):

Example Spain. I will write you the following: A few comerades from my home region are still with me. Among them are Sepp, Paul, Adam, Niki, Irmin, Emil, and Neuninger.

It goes without saying that this system was not new and not especially inventive. I am pretty sure that censors discovered a message encoded this way. To my regret, we don’t know whether Gauber ever used this system, let alone if his hidden messages (if they existed) were discovered.

Technically speaking, Otto Gamber’s steganographic method is an example of an acrostic. An acrostic is a text, in which the first letter of each word or paragraph spells out a message. My book Versteckte Botschaften- Die faszinierende Geschichte der Steganografie contains a whole chapter about acrostics. There are plenty of acrostists in poems, tombstone encryptions, novels, and many other texts. Otto Gamber was not the only one who thought of using an acrostic for beating a military censor.

One thing I don’t understand (Tobias Schrödel asks himself the same question) is, why there was no censor who discovered Gamber’s description of the steganographic method in this letter. Was there no censorship in the military unit Gamber belonged to? Perhaps a reader has an idea.

The rest of the letter

If you want to read the whole letter, here are scans of the two pages: 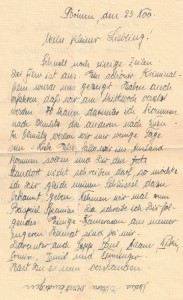 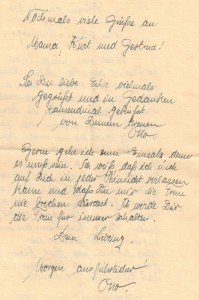 Interestingly, Otto Gamber did not dislike the thought of going to war. He writes: “I like to go to my service, because it is necessary.”
Follow @KlausSchmeh