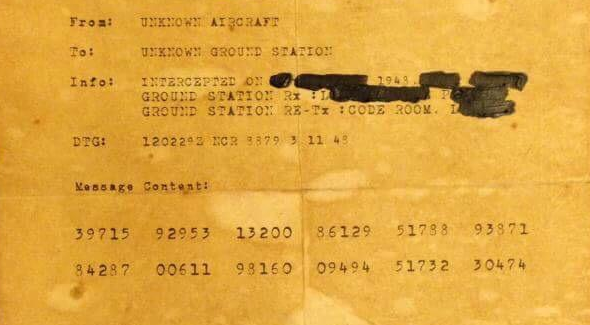 In 1943, the British intecepted an encrypted radio message sent from an airplane. Can a reader decipher it?

Looking for another interesting video to watch during the corona down time? David Oranchak’s latest Let’s Crack Zodiac webinar is certainly a good choice.

Speaking of good choices, let’s now look at something I have found and chosen on Reddit. It’s a dispatch from the Second World War sent to Bletchley Park, where the British had concentrated their military codebreaking activities. As is well known, the specialists at Bletchley Park not only deciphered hundreds of thousands of German Enigma messages but also successfully attacked countless ciphertexts created with other machines or with manual methods.

The said dispatch from WW2 was published by a Reddit user named StalkerSchuhart in the Subreddit codebreaking already two years ago. Apparently, the cryptogram it contained was never solved. Here is it: 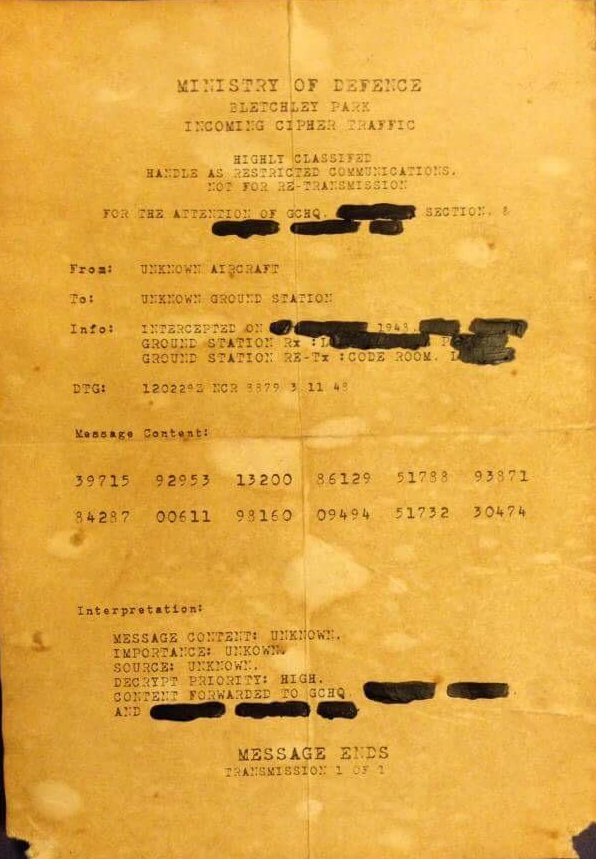 To my regret, a few passages in this letter are blackened. Nevetheless, it can be seen that the content is about an encrypted radio message sent from an unknown aircraft to an unknown base station in 1943. Here’s a transcript of the ciphertext:

In addition, a line with the following content can be read:

Considering that the Germans were the main war opponent of the British in WW2, it seems likely that this message was sent from a German airplane – but we can’t be sure.

Can it be deciphered?

As far as I know, German aiplanes didn’t use cipher machines for encrypting their radio messages – neither the Enigma nor others. The fact that the ciphertext consists of numbers doesn’t suggest that an Enigma was employed anyway.

So, which other encryption system may have been used? In my view, a codebook code is a promising option. Each of the five-digit groups might represent a code group taken from a codebook. Perhaps, the code is super-encrypted, for instance by adding a number to each group.

I’m afraid that a message of this kind can only be solved if the codebook is known. The best online sources for codebooks I’m aware of are the web-sites of John McVey and Satoshi Tomokyo.

Of course, it’s also possible that this cryptogram has already been deciphered and that the solution is availabe somewhere.

If you know anything about the background of this WW2 dispatch or if you can even break the ciphertext, please let me know.
Follow @KlausSchmeh