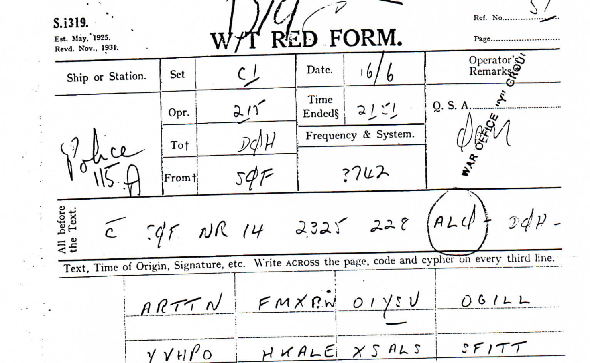 Crypto history expert Frode Weierud has provided me a number of unsolved German cipher messages from the Second World War. Can a reader break them?

Three weeks ago, I introduced the double box (Doppelkasten) cipher, a manual encrption method used by the Germans in the Second World War. My article included a challenge ciphertext consisting of 100 letters. Several of my readers tried to solve this cryptogram with hill climbing or other means, but to no avail. This surprises me, as the codebreaking programs written by my readers have proven quite powerful when it comes to solving manual ciphers. The double box might be more secure than I thought.

One thing that has meanwhile become clear to me is that there are several variants of the double box and that it is unclear which one(s) the Germans actually used (thanks to Seth, Richard Bean and others for their comments with respect to this issue). While this doesn’t affect my double box challenge, as the variant I used is the one I specified, it is still interesting to know how the soldiers in World War II employed this method.

The double box is a variant of the Playfair cipher. As has been pointed out on this blog many times before, the Playfair uses a permutation of the alphabet (without the J) as the key, written in a 5×5 matrix. The double box requires even two matrices of this kind, as in the following example:

The double-box varaint I introduced in my recent article is the most basic one. Letters are encrypted pair-wise, based on two substitution rules. Both require that the first letter of a pair is chosen in the first matrix, while the second letter is located in the second matrix. For instance, the letter pair TC is selected from the matrices as follows:

Depending on the position of the letters, one of the following two rules is applied:

As an example, TC is encrypted to VG:

As an example, VX is encrypted to IL:

The description of this double box variant is taken from the German Wikipedia entry. In Friedrich Bauer’s book Decrypted Secrets, a slightly different version is described. In rule 1, this variant changes the order of the ciphertext pair. TC is not encrypted to VG, but to GV. This is consistent with the double-box description WW2 veteran Jürgen Reinhold provided me. 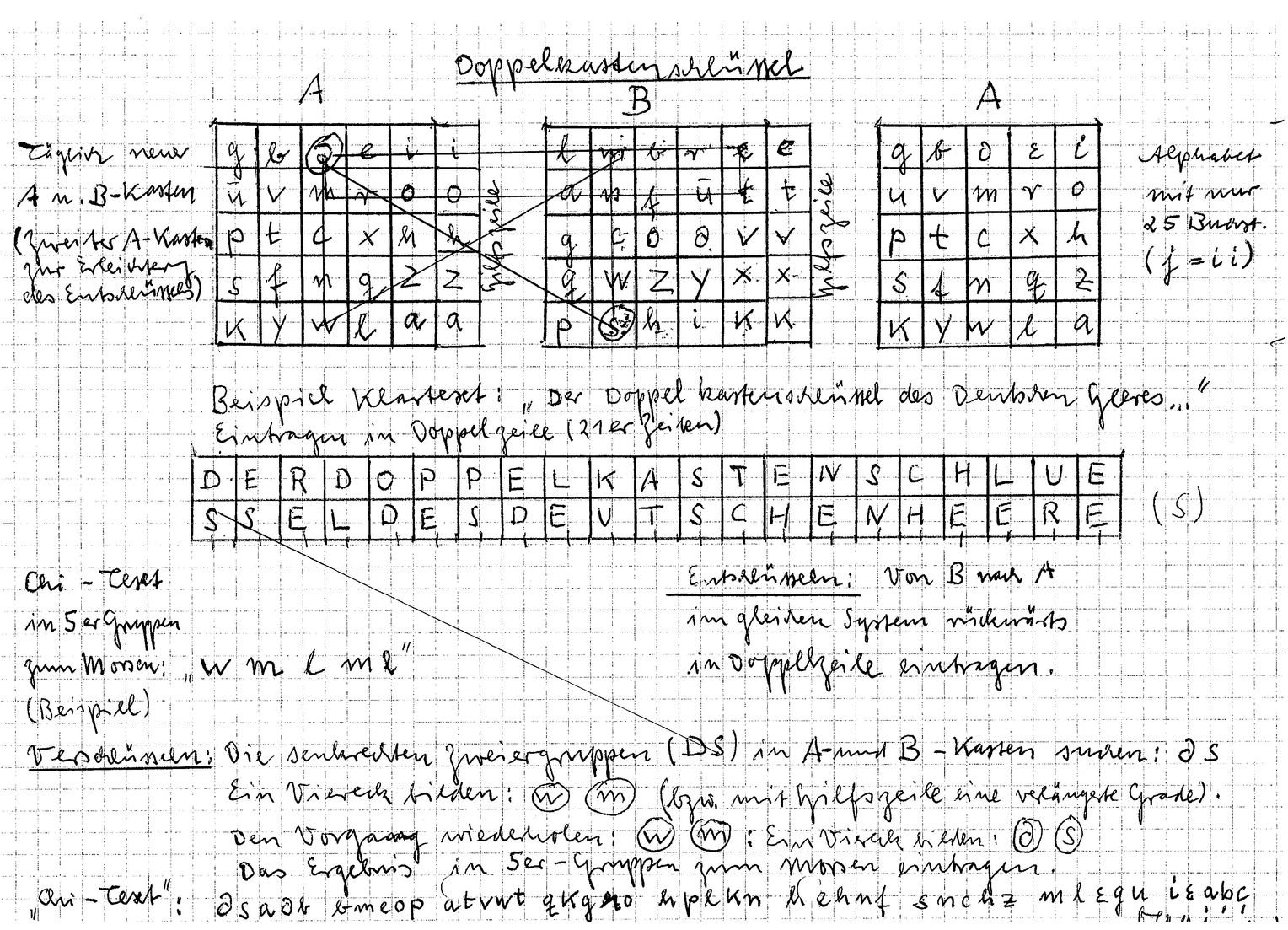 All three sources mention that the plaintext pairs were not (or not necessarily) chosen in the obvious way (TH IS IS AN EX AM PL EX), but based on digraphs generated from different lines. In the following case, the pairs would be TS HA IN SE IX AL ME PX:

Reinhold used a line length of 21 for generating the pairs. The same is mentioned on Wikipedia. Bauer doesn’t mention the line length.

After publication of my article, Frode Weierud, … 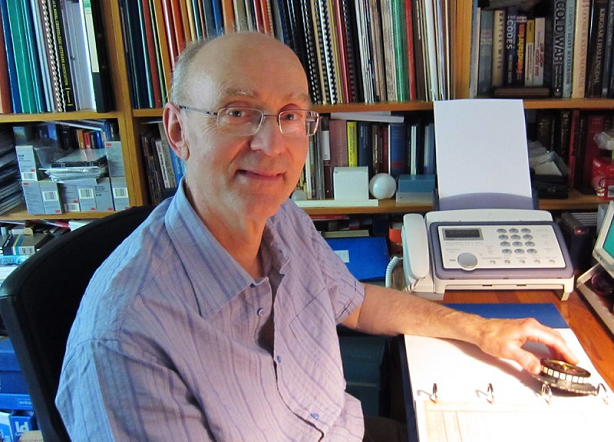 … one of the world’s leading Enigma and WW2 cipher experts, told me that he had found a number of original double-box messages from the German Police (Ordnungspolizei) in Second World War. He thankfully provided me scans an transcripts of all of these.

The first message Frode informed me about was sent by the station SQF (Mogilev1) to the station ALQ via DQH (Berlin) on 16 June 1942. The message was transmitted on the night frequency of the Russia high
frequency (HF) network at 3742 kHz2. 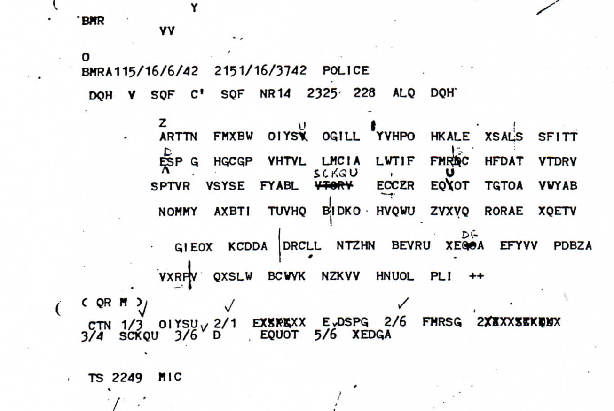 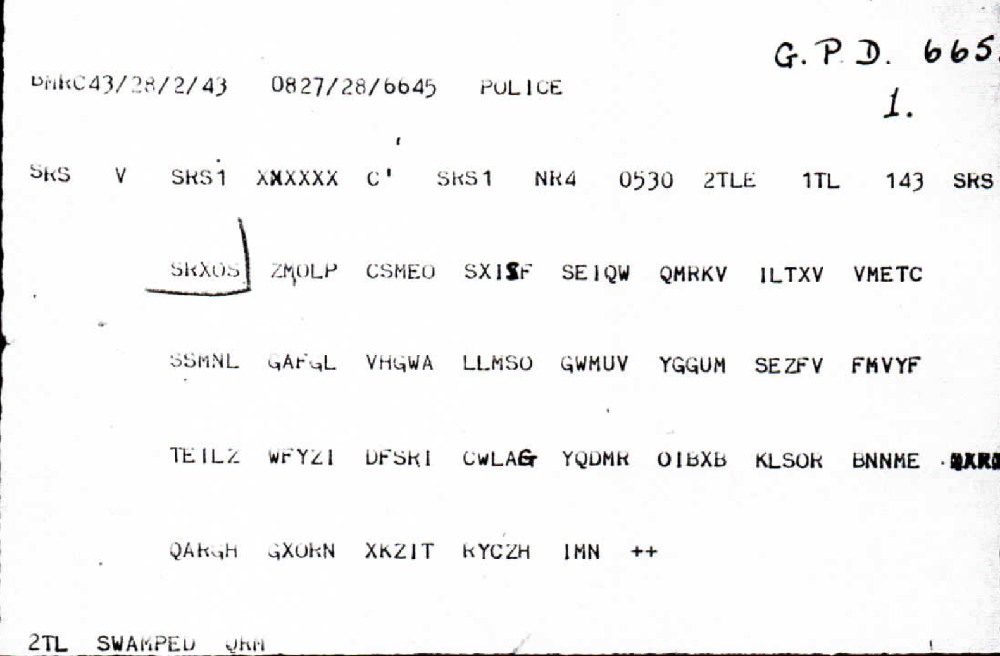 The message is a transcript of the attached teleprinter message sent from the English intercept service (Y-service) to Bletchley Park for analysis and decoding. The message was intercepted by two different intercept stations and the corresponding Red Forms from stations No. 51 and 43 have also been attached. Here it can been seen that some of the letters have been received differently probably due to a weak signal from the transmitting station and as mentioned, due to noise and interference (QRM).

The following five double-box messages (several of them composed of two parts) were sent by German Police in WW2, too. Four of the texts are from the same day, 27 February 1942. The first message, …

… dated 28 February 1943, might be from the same date. The indicator, XOS, is the same as for some of the other messages.

Now, the question is if these double box cryptograms can be broken. In my view, it should be possible, as most messages Are much longer than a hundred letters and as some of them are probably encrypted with the same key. A well-designed hill climbing program should be able to solve ciphertexts of this kind.

However, we don’t know how exactly the double box variant used in this case worked. My first guess would be that the version with two substitution steps and digraphs generated with 21-letter lines was employed, but this is far from sure.

Can a reader break these cryptograms anyway?
Follow @KlausSchmeh

Further reading: Who was Harry Welsch?