StartseiteCipherbrainSix encrypted postcards and a Bank of England cryptogram

Six encrypted postcards and a Bank of England cryptogram

Today there are six encrypted postcards and a puzzling tweet from the British central bank.

Blog reader John Haas from Austria has thankfully drawn my attention to a tweet that the Bank of England recently published: 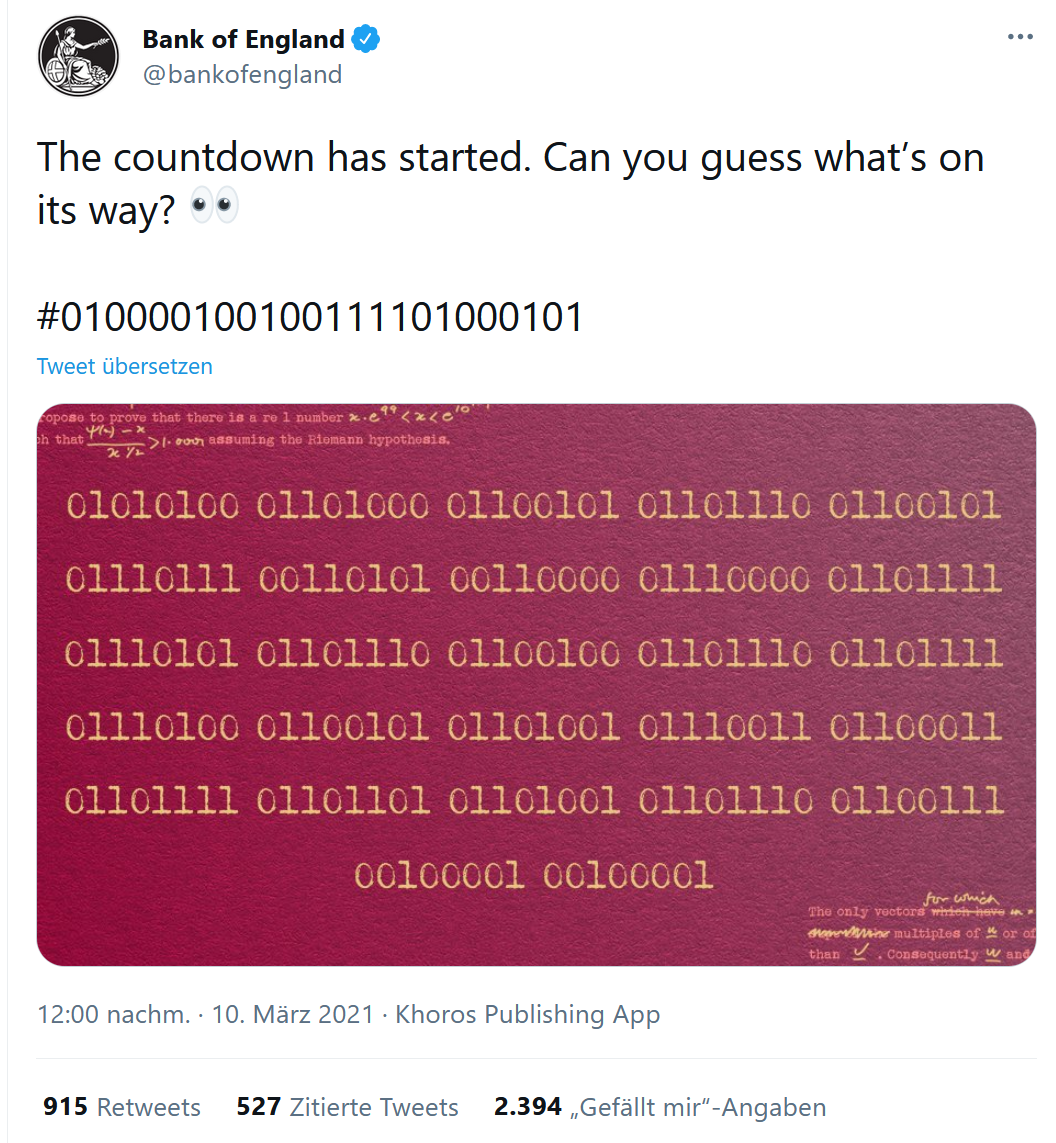 Unfortunately, I do not know which countdown has started here and what is to be announced. Presumably, each binary number in this message stands for a letter. Can a reader decipher the message and/or the hashtag? Perhaps the solution can also be found in the more than 800 comments this tweet has already received. Admittedly, I have not read through all of them.

And then I would like to point out that once again a Cipherbrain reader has published something interesting: David Scheers from the Netherlands has written a book called “Zealous with Language and Ciphers, Shorthand, ciphers and universal language around the 17th century”. It is now available on Amazon. I am quoted in it, which makes me very happy. I haven’t read the book yet, but what I’ve seen so far looks very interesting. 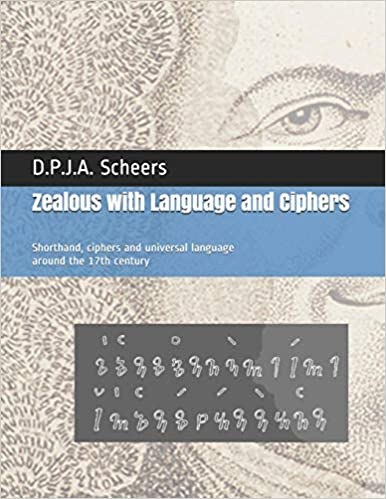 Let’s move on to the next topic. The Briton Mark Baldwin, whom I got to know through the ICCH Forum (by the way, my next talk will be there on Saturday at 5 pm), already provided me with some encrypted postcards last year. I have already blogged about a few of them, and my readers were once again very successful in solving them. However, there are six more cards in this collection that I have not yet presented. I would like to do that today.

Let’s start simple. The message on the following card should be solvable even for moderately talented code breakers: 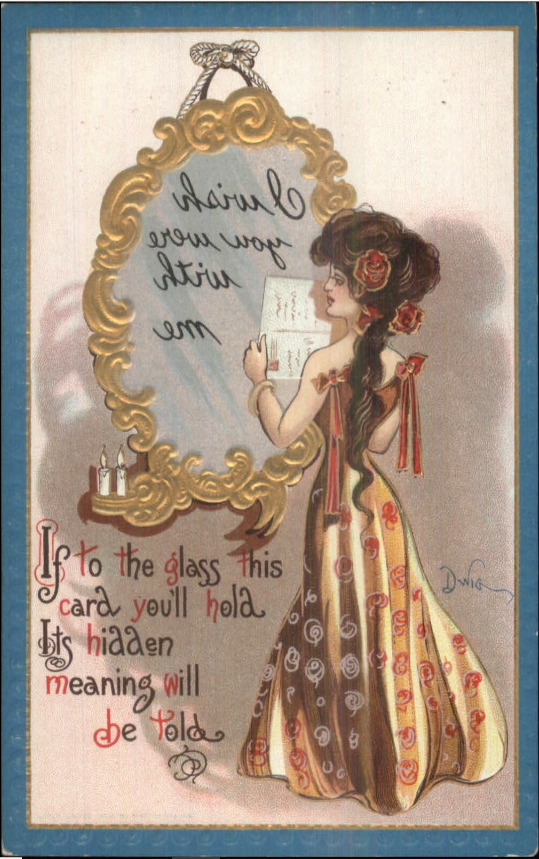 The following postcard from Milwaukee (USA) from 1911 looks much more difficult: 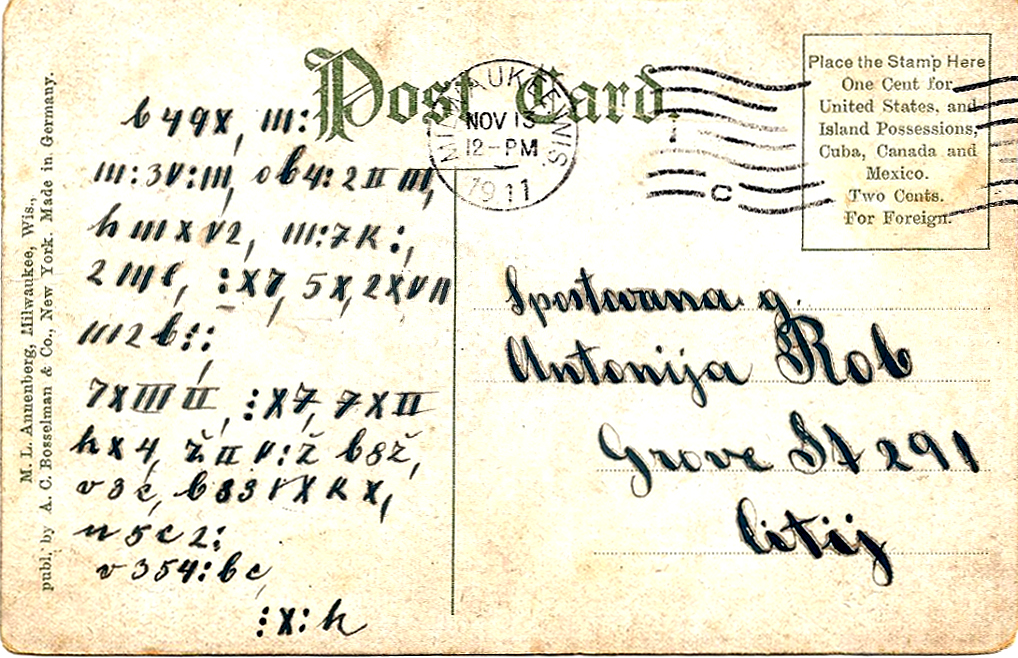 I find it interesting that “City” is indicated as the city. This probably means that the card was sent in Milwaukee and that the recipient also lived there. The first name “Antonija” could be Croatian. Does anyone know what “Spostwana” (?) means?

Next is a card encrypted with a variant of the Pigpen cipher. 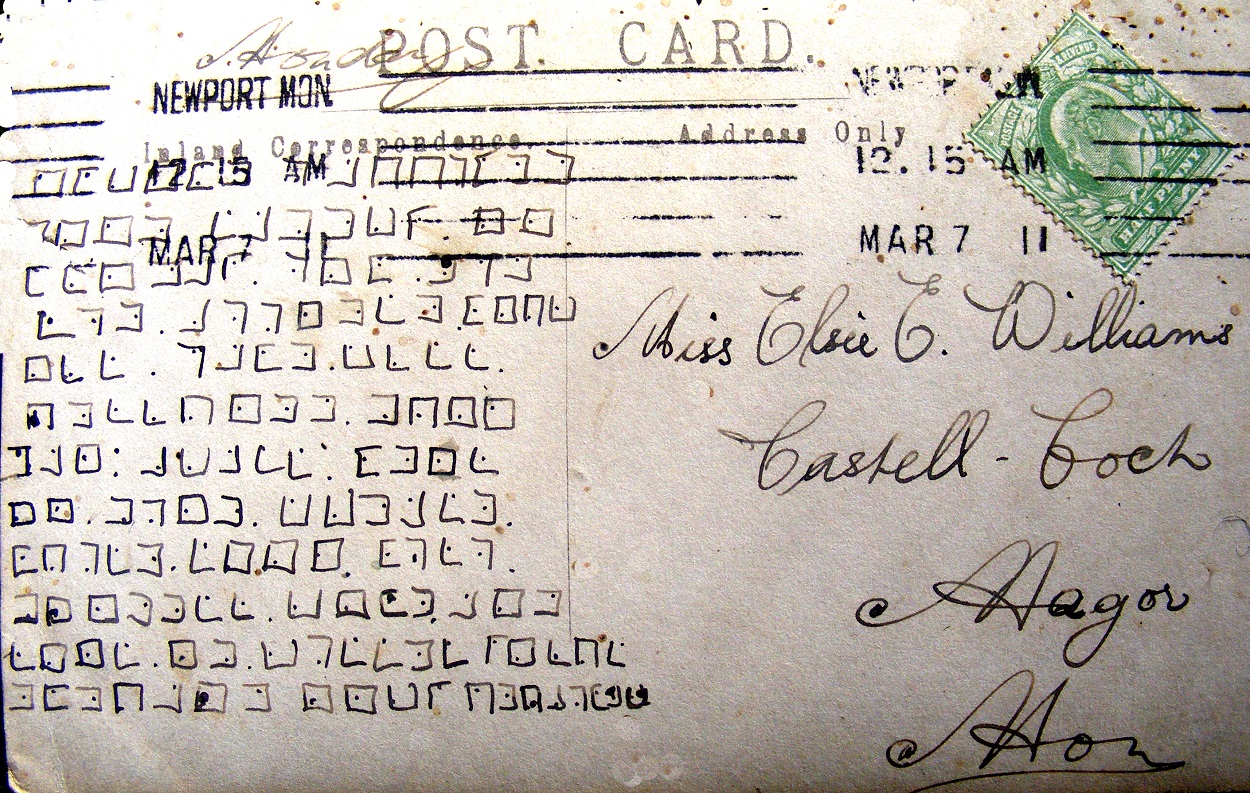 The recipient (as in almost all cases a “Miss”, i.e. an unmarried woman) lived in Magor near Cardiff (Wales).

In 1908, another unmarried woman in Mile End (this is a district of London) received the following postcard: 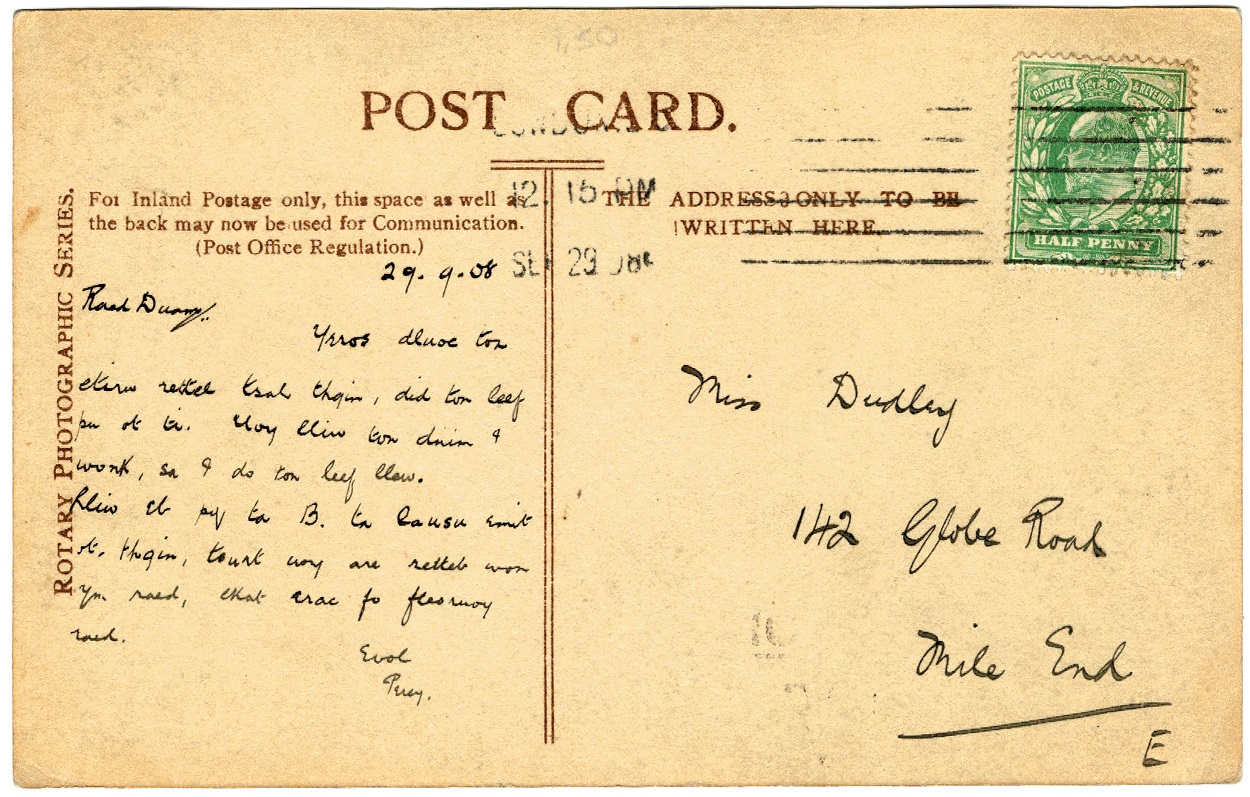 Words like “evol”, “ta” or “leef” indicate what kind of encryption may have been used here.

We stay in London. The unmarried A. Reed, who received the following card, apparently lived in the South Kensington district: 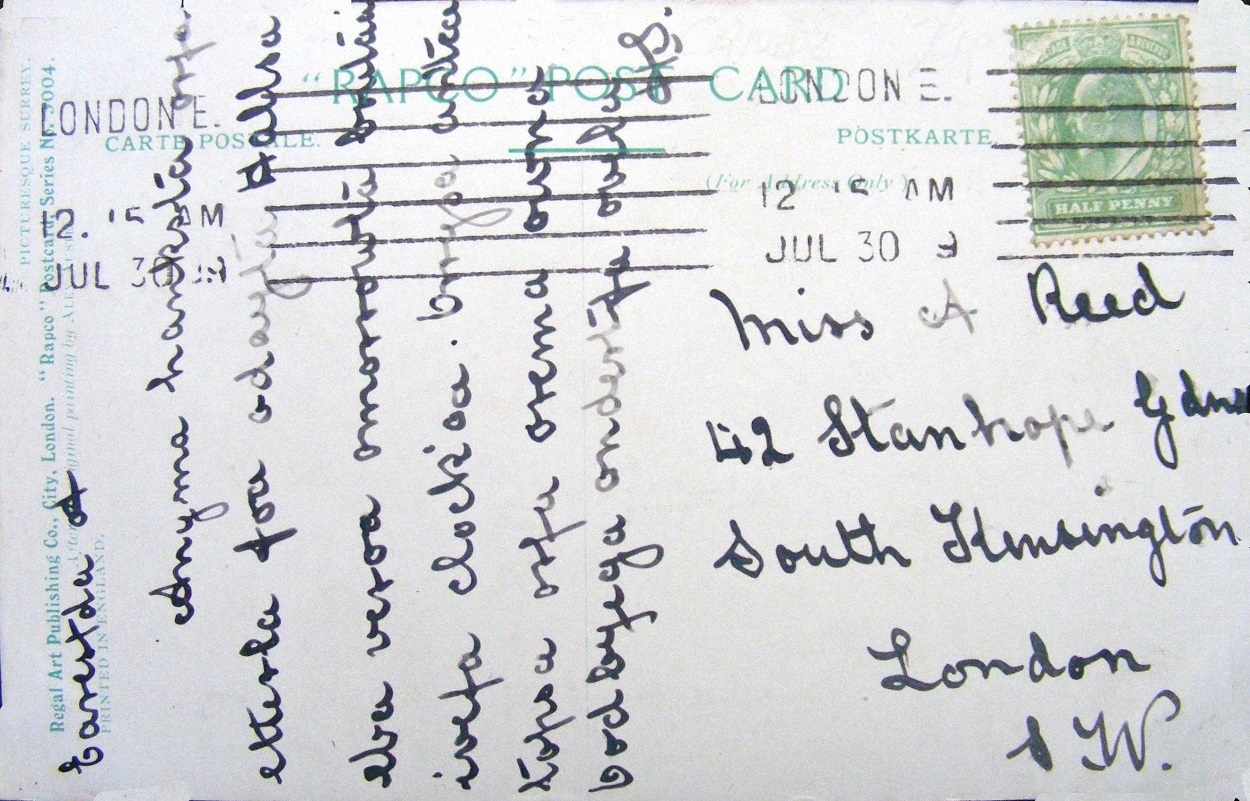 Finally, it goes to Leighton-Buzzard north of London. The following postcard was again addressed to an unmarried woman, a Miss Emery: 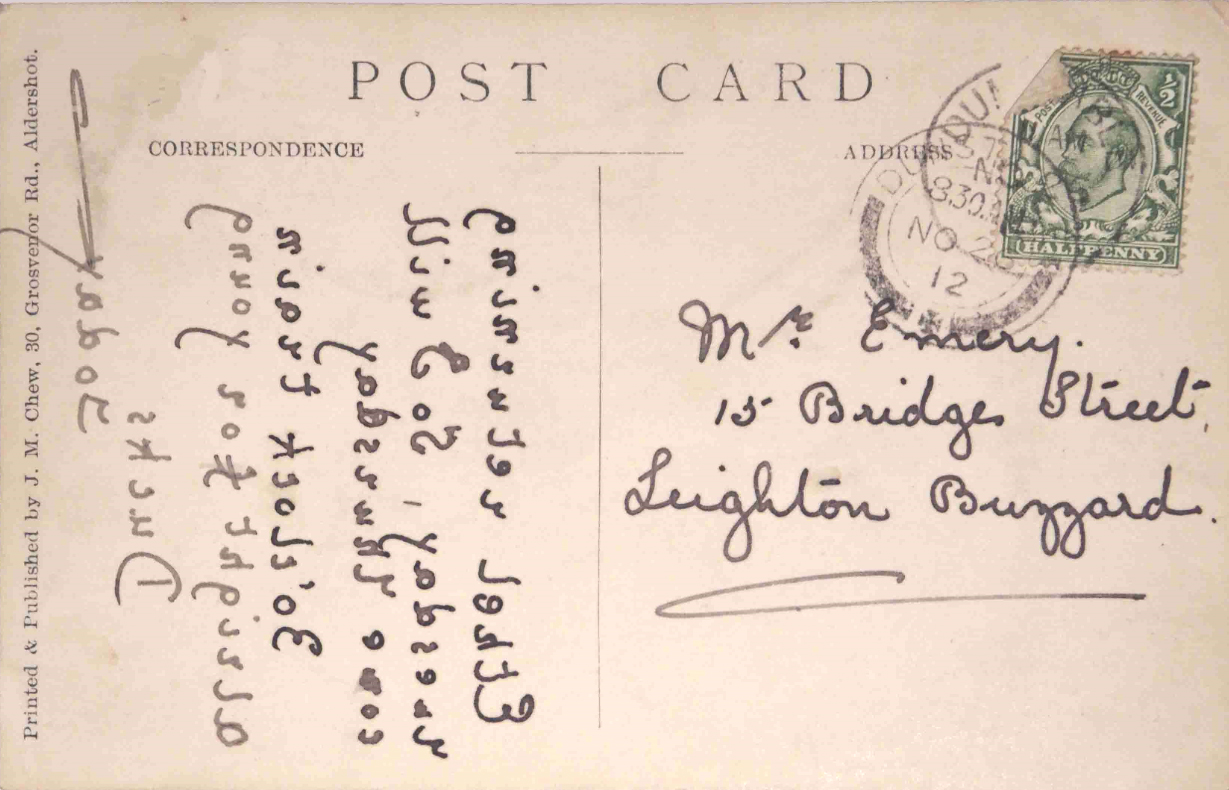 I would be delighted if, with the help of my readers, I could manage to decipher these cards in the next few days. In some cases this should not be particularly difficult. The card from Milwaukee, on the other hand, does not look quite so easy. In any case, I wish you much success.