StartseiteCipherbrainSolved: The encrypted letters from Charles I to his son 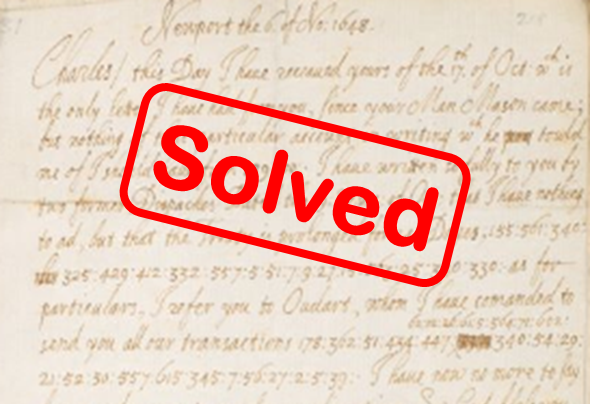 Solved: The encrypted letters from Charles I to his son

My blog readers have once again achieved a great success: Norbert Biermann, Thomas Bosbach and Mathew Brown have solved the encrypted letters of Charles I, which I presented a few weeks ago.

The English King Charles I (1600-1649) was imprisoned for about a year on the Isle of Wight, an island off the south coast of England, until shortly before his execution. 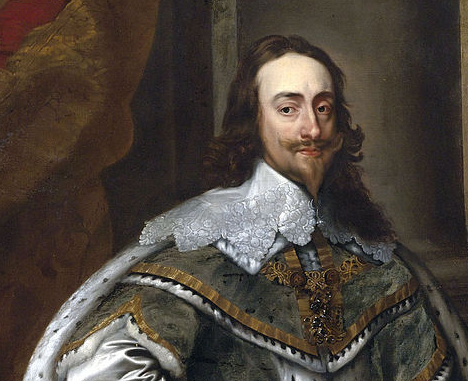 As you can read on Satoshi Tomokiyo’s website, he wrote several encrypted letters to his son from there. Another letter Satoshi lists was sent to the aristocrat Edward Worsley. 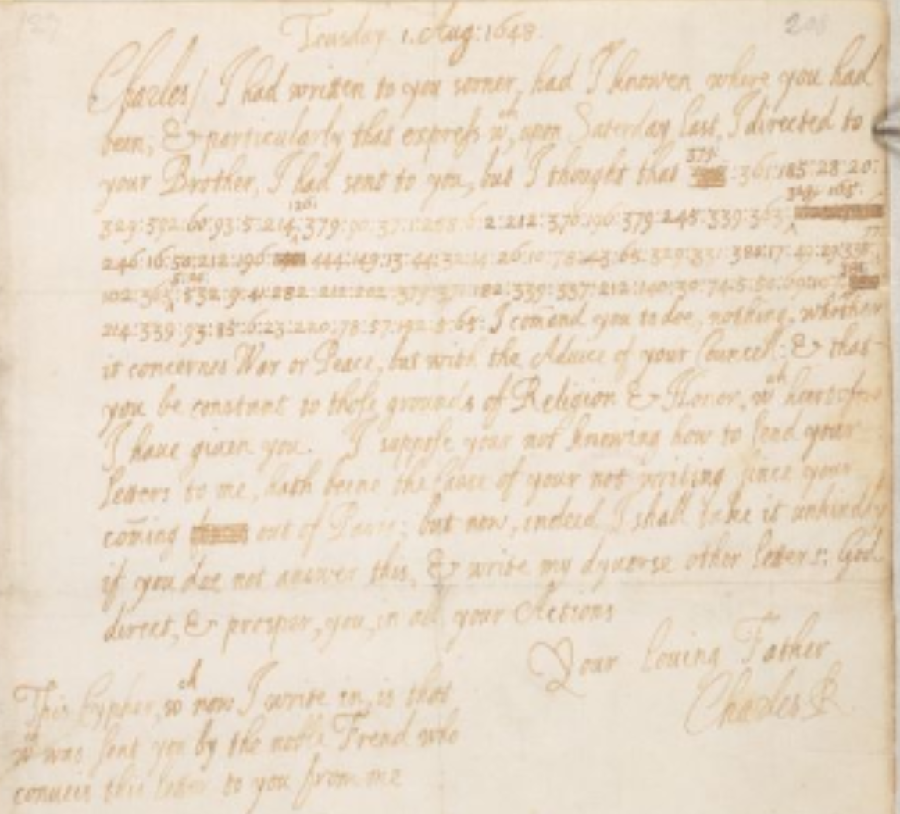 On April 11, 2021, I presented the said letters on my blog. Norbert Biermann, whom my readers have long known as an excellent codebreaker, analyzed these cryptograms and published his intermediate results as comments to my article. Thomas Bosbach and Matthew Brown, also no strangers to this blog, joined in. When it became too cumbersome to conduct the discussion via blog comments, the three contacted each other and from then on exchanged information via e-mail.

With success: Norbert, Thomas and Matthew were able to reconstruct a nomenclator that Charles I had used for his letters. This enabled them to decode the letters of September 2, October 3, and November 6 and 7, 1648. The letters of August 1 (to the son) and May 22 (to Worsley), on the other hand, were written with a different nomenclator and therefore remain unsolved for the time being.

I need not stress that I am once again delighted. Norbert, Thomas, and Matthew have done a great thing. I am proud to be able to report about it on my blog. For this I don’t even have to suck much out of my fingers, because Norbert sent me a description of the solution that leaves nothing to be desired – even including an English translation! Thanks a lot! This makes blogging a lot of fun.

Norbert, Thomas and Matthew write about their solution:

We are very sure about the single letter part of the nomenclator (code groups 1 through 90). Because of the nice regularity, code groups that do not even appear in the letters could also be assigned (shown in gray below).

The word part of a nomenclator, however, cannot usually be reconstructed completely unambiguously, and this is especially true when there is so little ciphertext available as here: there will always be code groups that rarely appear in the ciphertext and for which different assignments seem possible. In the worst case, a single misplaced word then can completely distort the meaning of a whole paragraph. We therefore had to weigh very carefully whether our assumptions were secure enough, while delving into the historical context as best we could. In the end, we decided on a “traffic light system”: marked in green are the words we consider to be as good as certain, while yellow are suggestions we find quite plausible, without being entirely sure. Words for which we have only a very speculative suggestion are marked in red. Historians will certainly be able to provide more clarity here.

Here is the nomenclator reconstructed by Norbert, Thomas, and Matthew: 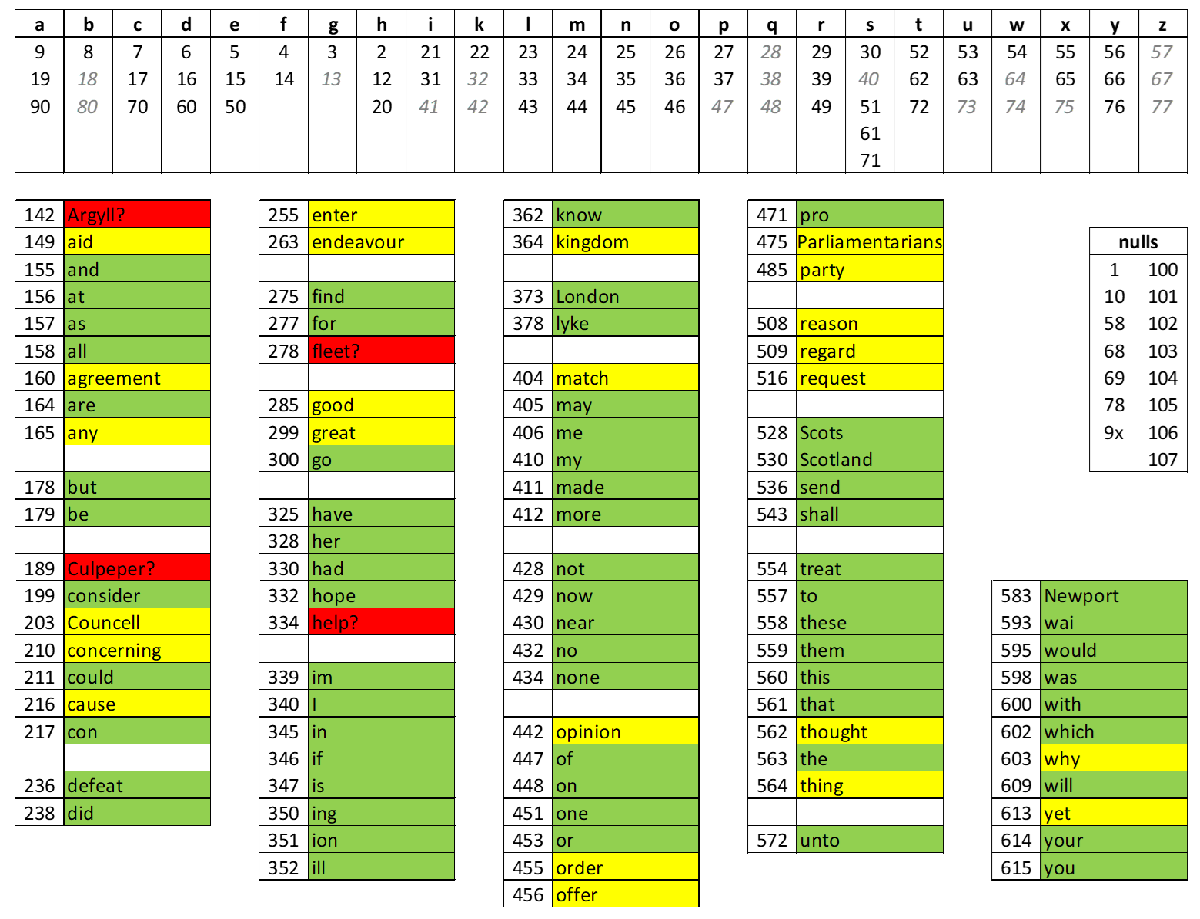 Here are some more comments from the three successful decipherers:

Norbert also provided me with the following background in his email:

The letters in the clear

Here are the four letters with the (deciphered) ciphertext in blue. Hyphens are used to keep the encoding scheme visible (for example, Charles encodes the word “then” by two code groups, one for “the” and the other for “n”; we write the-n). “Charles R” stands for “Charles Rex”, i.e., King Charles. 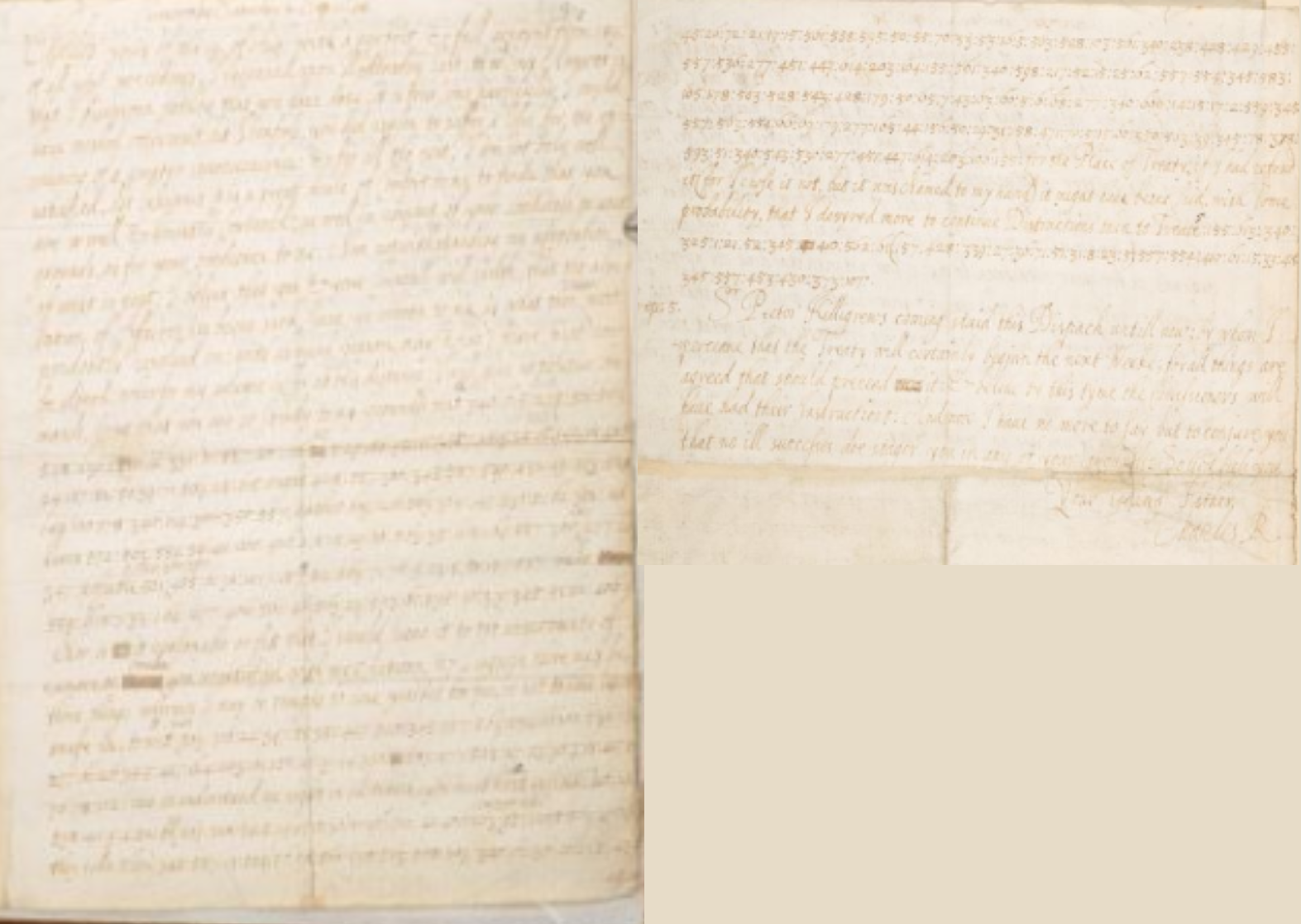 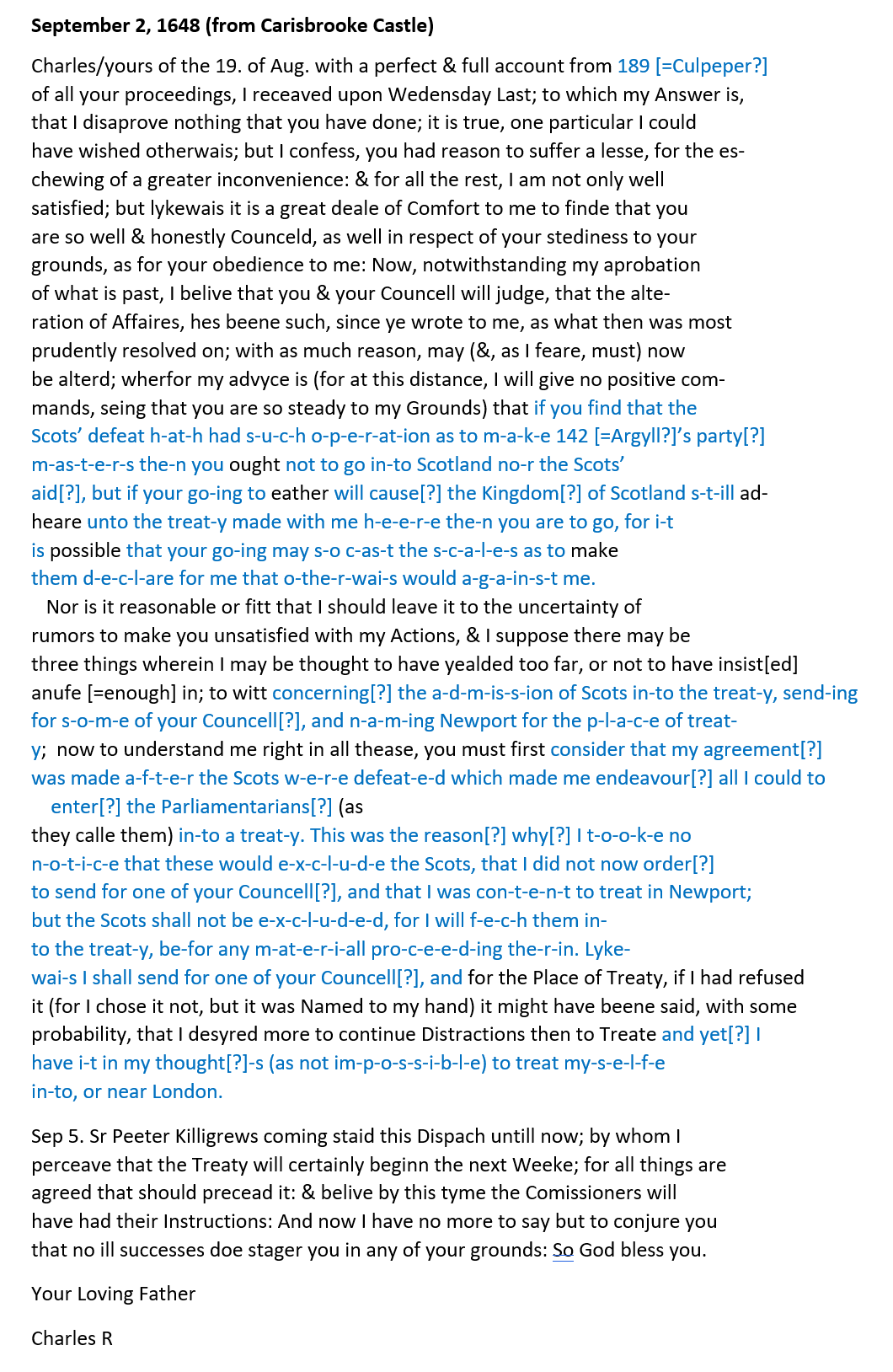 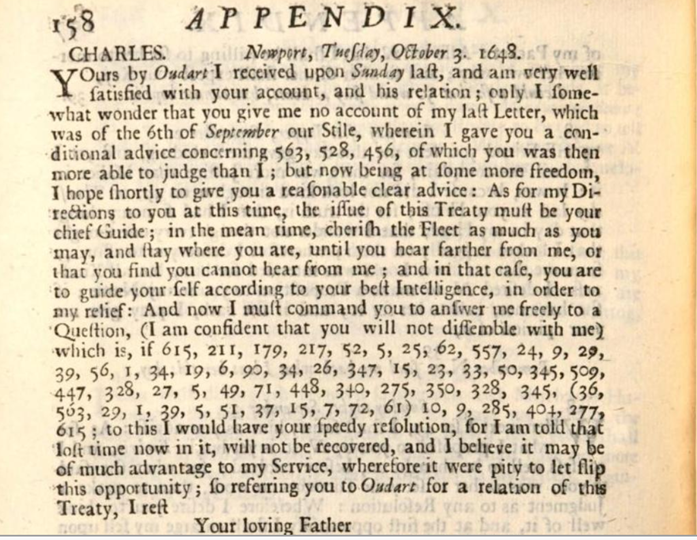 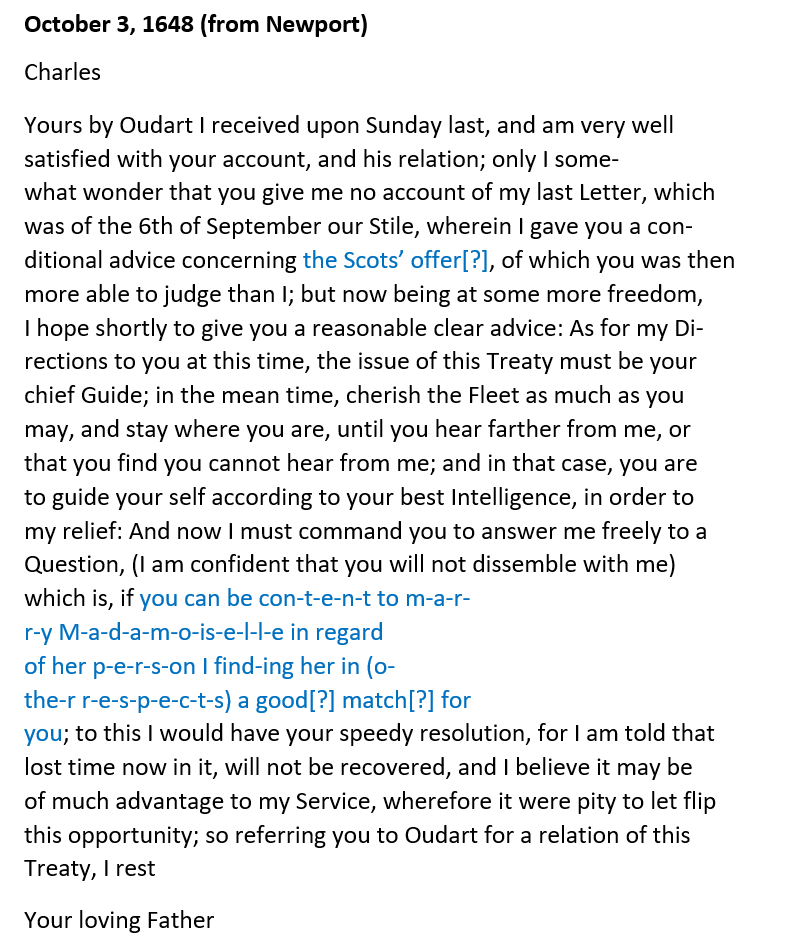 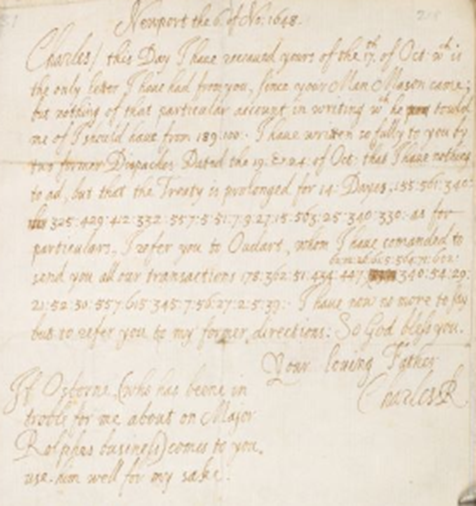 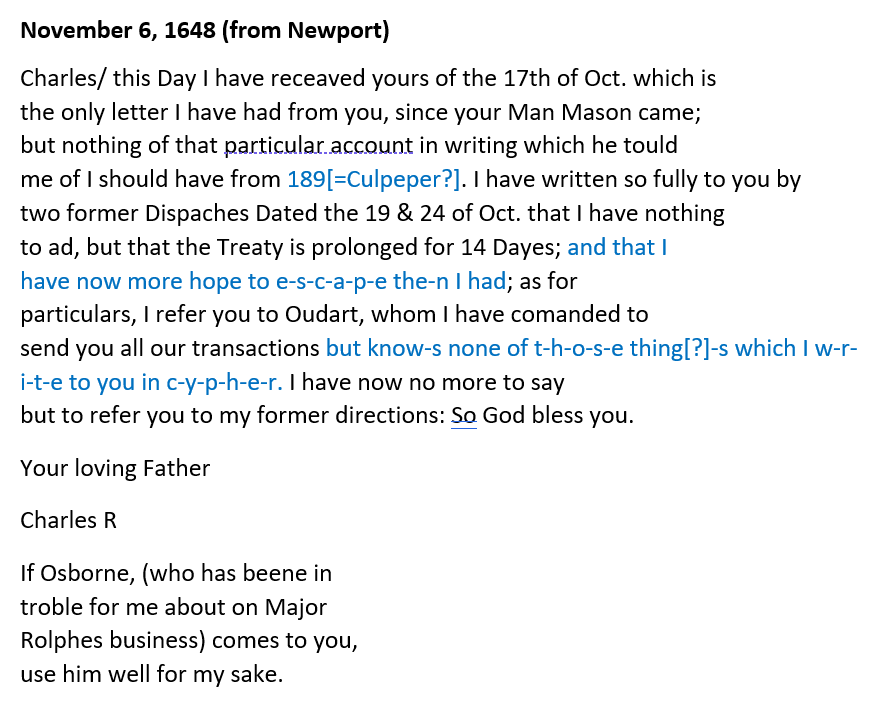 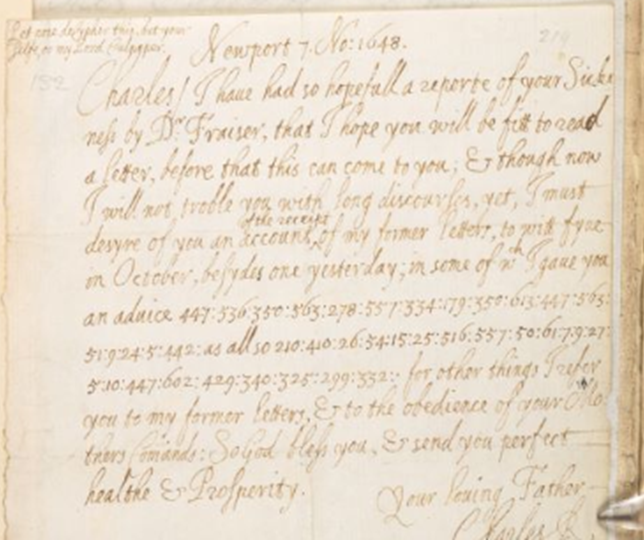 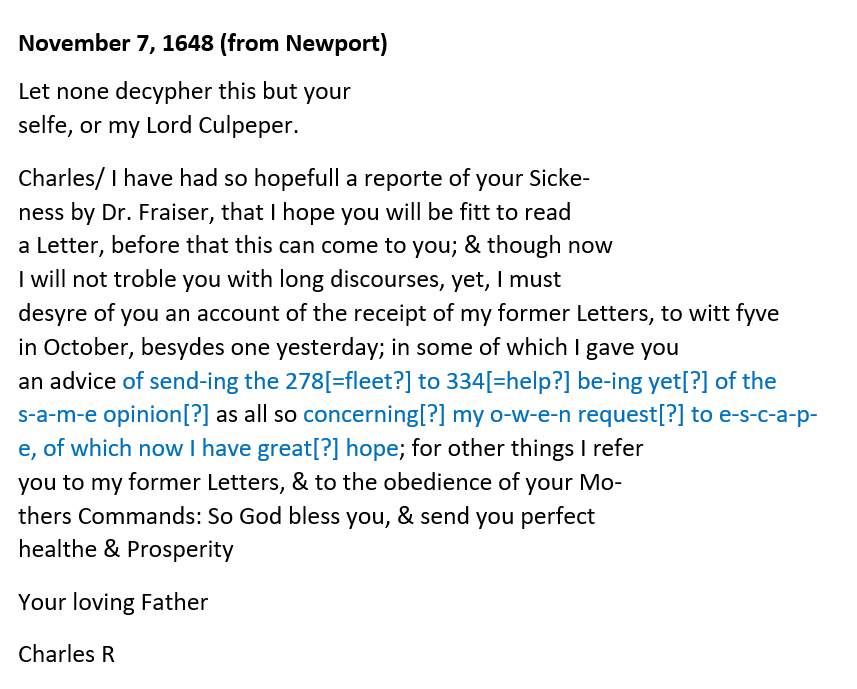 Once again many thanks to Norbert, Thomas and Matthew for this masterpiece! I am sure that these decrypts are also interesting for historians. If you want to follow the example of these three, you can take a look at the two still undeciphered letters. Many success!