StartseiteCipherbrainThe Terry Case: An Unsolved Murder and a Coded Message 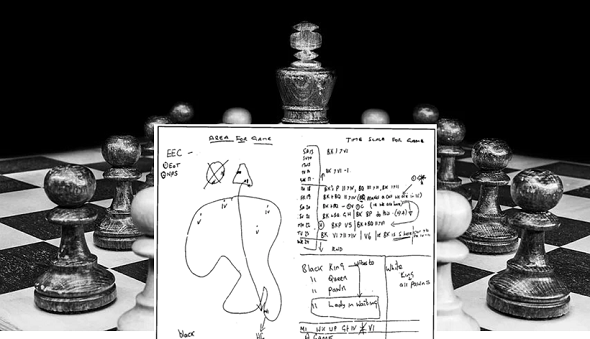 The Terry Case: An Unsolved Murder and a Coded Message

Software developer Therese Clare Terry disappeared without a trace in 1990 and was later pronounced dead. The prime suspect made a note that shows, among other things, chess moves. Can this message be decoded and can the body be found in this way?

One of the nice things about being a crypto blogger is that you always get surprises. Last week this was the case again, when I – thanks to Google – came across a story that is extremely exciting and virtually predestined for Cipherbrain. I find it astonishing that this incident is not mentioned with a single syllable in the crypto literature and on the websites I know. One experiences surprises again and again.

The story in question revolves around British software developer Therese Clare Terry. The then 43-year-old woman was traveling in Ireland in 1990, where she was last seen on January 19. After that, she disappeared without a trace. Circumstances suggest she was the victim of foul play. In 1995 Terry was declared dead. There is more information in a newspaper article about this case.

Quickly, Colin English, who also worked in the computer industry, came under suspicion of having killed Terry. The police arrested him and he had to spend 18 months in custody. In the end, however, the evidence against English was not enough to convict him. The Terry case remains unsolved to this day, and the body has never been found.

The Terry case is interesting for Cipherbrain because Colin English handed over a possibly encrypted note to the police while he was in custody. The meaning of this message is still as unexplained as the crime itself: 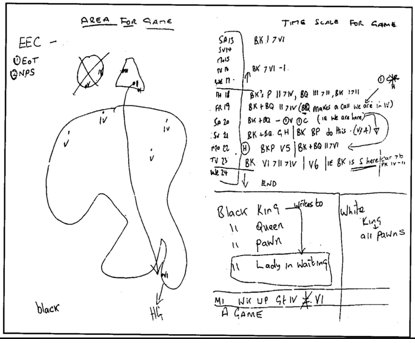 It is halfway clear that the following lines stand for weekdays (Saturday, Sunday, …):

Presumably, the series begins with January 13, 1990 (a Saturday) and runs through Wednesday, January 24. Unfortunately, no further information is assigned to the individual days.

The following part of the cryptogram might have something to do with chess (BK and BQ probably stand for “Black King” and “Black Queen”): 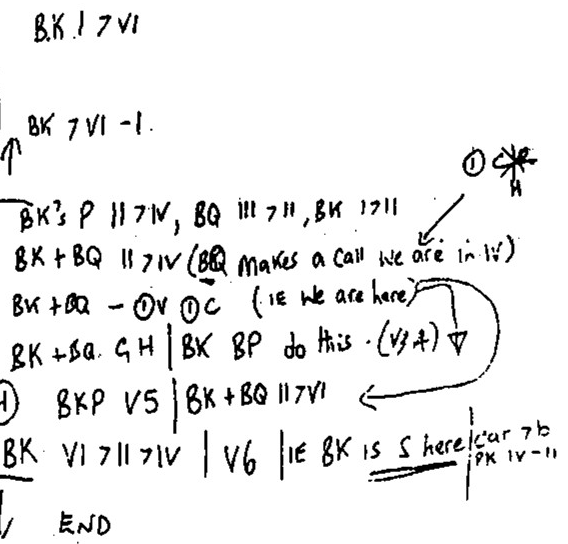 The interpretation of a chess player

The police decided to ask a chess expert for advice. The choice fell on the British chess player and journalist Raymond Keene. He reported on the case 20 years later for the newspaper “The Article”. It was through this article that I came across the Terry case and the cryptogram.

Also, Keene surmised that the spot on the right represents mainland Britain, while the crossed-out spot on the left is supposed to be Ireland. The large structure in the center, therefore, represents southern Ireland, where the case took place.

Keene drew some more conclusions from the cryptogram, which can be read in his article. Unfortunately, nothing tangible came out in the end. In particular, Terry’s body was not found even after the supposed decryptions.

An encrypted text or a hoax?

Keene also faced criticism for his interpretations of the cryptogram. A chess blogger, for example, called the various conclusions a PR action by Keene, who had interpreted into the note exactly what was known about the case.

The suspect Colin English later stated that the cryptogram was meaningless and was only meant to mislead the police. On the one hand, this is credible. On the other hand, the note could still be decipherable, and perhaps it even contains information relevant to the crime. In any case, English would not be the first perpetrator who derives satisfaction from playing with fire with the police.

I find the story about the disappearance of Therese Clare Terry exciting. Can a reader make sense of the Terry cryptogram? Or is it really just a ruse devised by a computer expert to fool the police? I will gladly accept comments.

Further reading: Tony Gaffney has broken the encrypted diary of a pedophile priest