StartseiteCipherbrainUnsolved ciphers in a 300-year-old manuscript 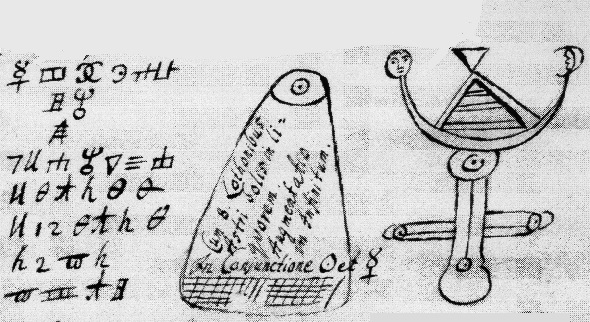 Unsolved ciphers in a 300-year-old manuscript

Polish historian Rafał Prinke has come across coded passages in an old manuscript by Hamburg physician Benedikt Nikolaus Petraeus. Can a reader decipher them?

Those who (like me) deal with the Voynich Manuscript know the Polish historian Rafał Prinke. Among other things, he has written a Voynich Manuscript book with René Zandbergen and Stephen Skinner. In 2012, I met Rafał in person at the “Voynich 100” conference near Rome. He is one of the leading experts on the history of alchemy and astrology and, according to an interview, one of the leading Polish genealogists.

Rafał recently published a scholarly paper entitled Learn to Restrain Your Mouth: Alchemical Rumours and their Historiographical Afterlives. It deals with a longer poem (consisting of 500 lines) previously attributed to one Martinus de Delle, who is said to have been a valet of Emperor Rudolf II. (1552-1612) is said to have been. Rudolf II is also known in the Voynich manuscript scene, as he may have owned the manuscript.

However, Rafał Prinke and his co-author Mike Zuber conclude that the said Martinus de Delle never existed and that the poem was instead written by another alchemist of the time. In their work, the two present a complete transcription of this lyrical work. 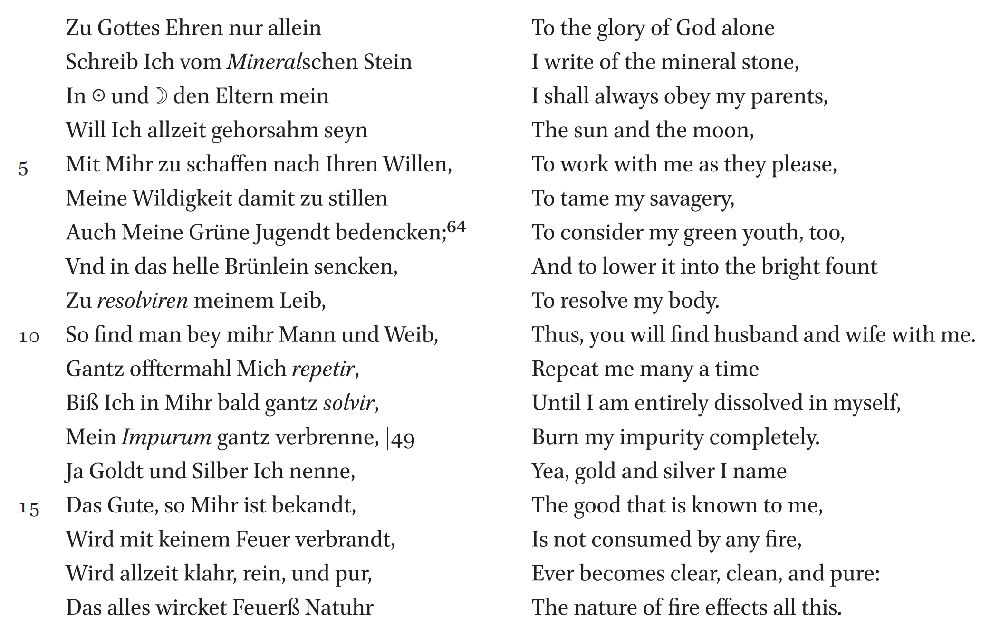 As a source, Rafał and his colleague used the only known available copy of the poem. This is in a manuscript made by the Hamburg physician Benedikt Nikolaus Petraeus around the year 1700. In addition to the poem, the manuscript contains an introduction written by Petraeus.

And now it gets interesting for crypto enthusiasts: Petraeus’ manuscript contains five sections that are obviously encrypted. Rafał has already shown these five cryptograms to some experts before publishing his work. I also had the opportunity to look at them. So far, no one has been able to decipher them.

Below are the five encrypted passages from the manuscript. Below each of them is my assessment, which I sent (in English) to Rafał at the time.

You have certainly noticed the word “Tinctur”, which indicates that we deal with something like a recipe. The vertical lines are probably word separators. The number of symbols in the alphabet used is too high for an ordinary substitution cipher. So, there are basicly two possibilities:

Of course, it is also possible that both options were used at the same time, which results in a nomenclator with homophones.

Solving this cryptogram based only on statistical examinations might be difficult. Perhaps, it possible to guess a word, which can be used as a crib. Many 17th century nomenclators are sorted in some way, which makes cryptanalysis a lot easier, but this one is not based on numbers, so I see no obvious way of sorting.

This looks like a key. However, I have never seen a key of this kind before and I don’t see an obvious was how to use it.

At first view, it looks like a table listing homophones for each letter. However, the first line doesn’t list the complete alphabet, and then some letters are repeated. This is very unusual for a substitution table. In addition, several symbols in the third and fourth line are repeated, which doesn’t make sense in a substitution table, either.

One possible interpreatation is that only the first two lines represent a key. Perhaps, this table that was used in addition another, more complete table in order to use the numbers from 1 to 8 as additional homophones. If this assumption is correct, line 3 and 4 might represent a short encrypted text, e.g., two encrypted words. As the third last letters in both lines ar identical, it might be possible to guess them. Taking into account that the cleartext is written in Latin, these three letters might be IUS or IUM. 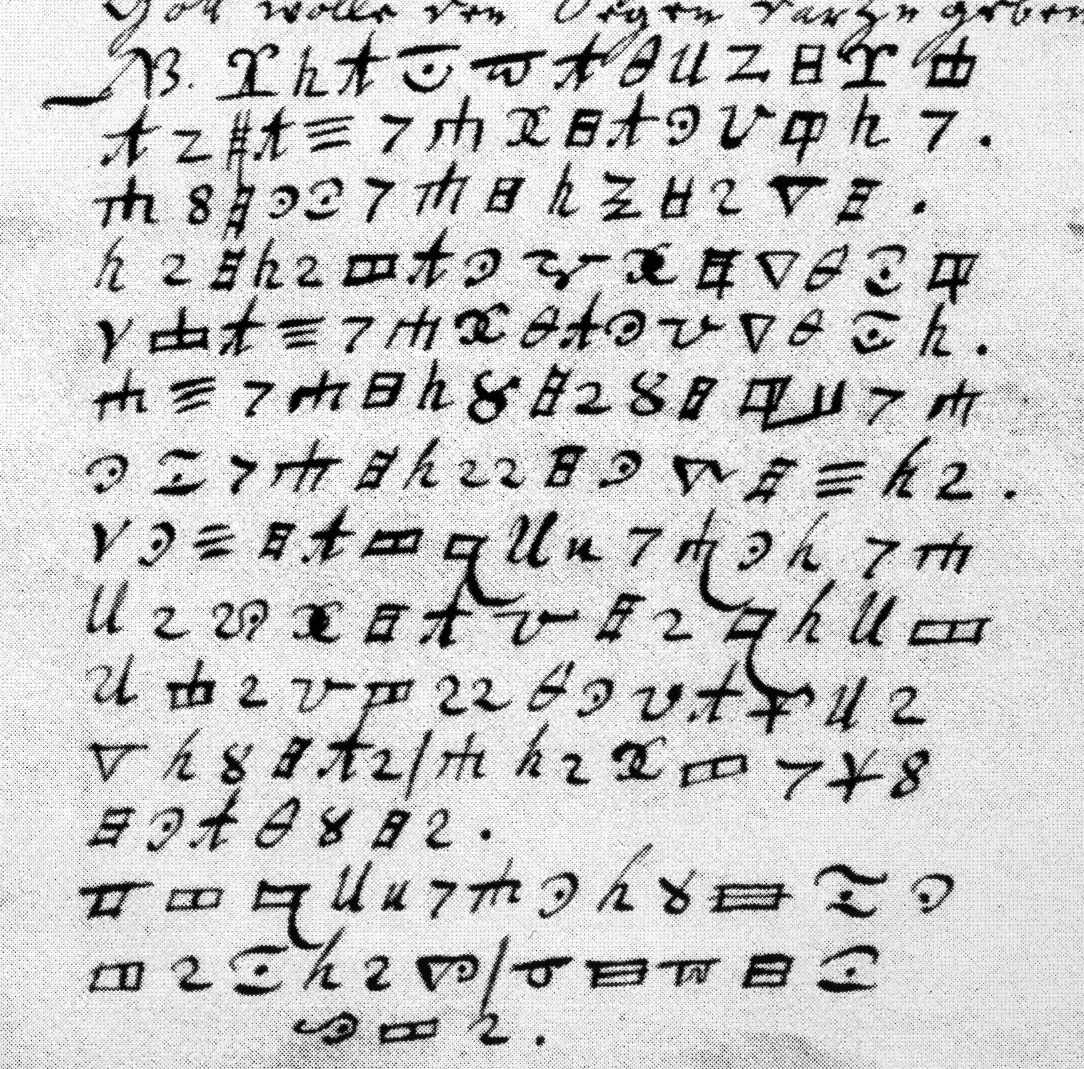 This text could be encrypted in an ordinary substitution cipher, perhaps with a few homophones. A small nomenclator is another possibility. As no word boundaries are indicated, guessing words is difficult. Statistical properties might help. Considering that we deal with a German message, the three most frequent letters (h, 2 and a non-standard symbol) might stand for E, N and I. Trying different combinations and applaying them on the ciphertext might lead to recognizable words, but my tries have not succeeded. 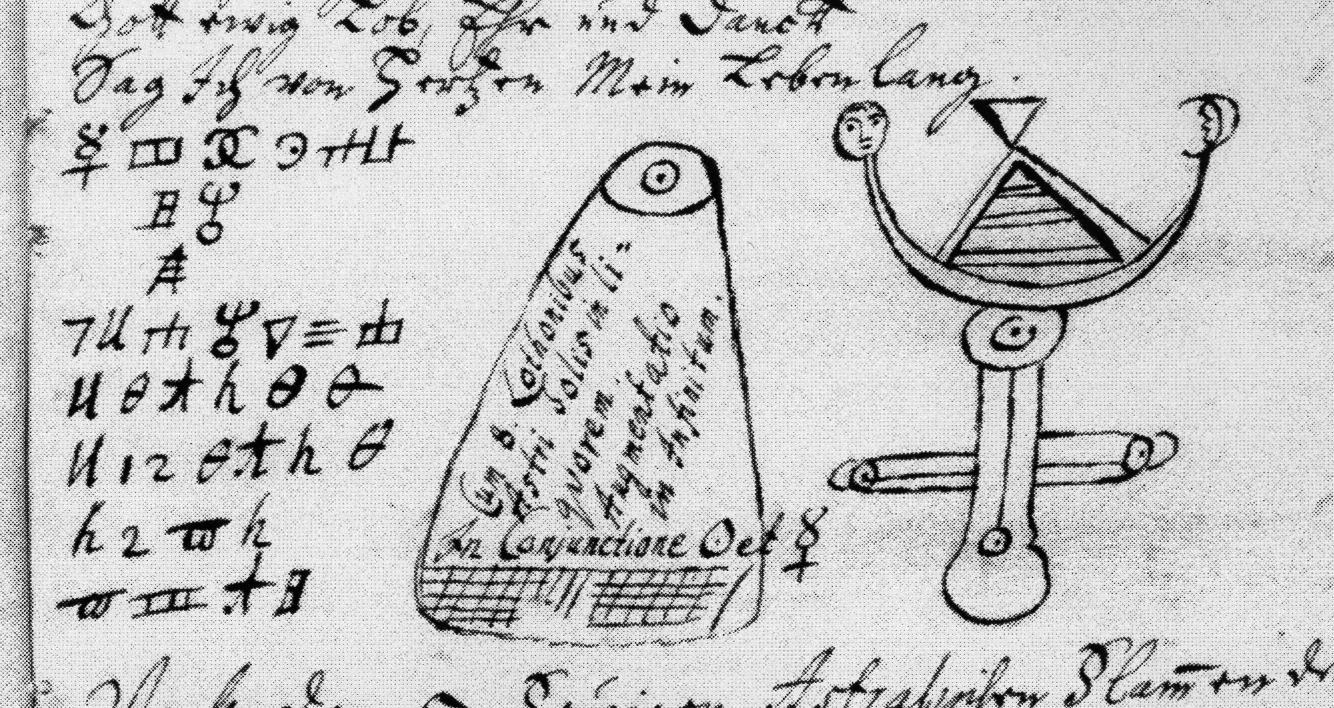 Here, the string “h2wh” looks interesting. h and 2 are frequent letters, w is not. Perhaps, this string stands for ENDE. However, I didn’t get much further when I tried to continue based on this guess.

This is a short message. It’s difficult to say where the word boundaries are. The last word (MUh2hu2 or h2hu2) might be usable as a pattern search. With CrypTool 2 I received the following German words:

h2hu2
No German word with this pattern.

To my regret, nothing really convincing showed up (GALILEI looks nice, but I doubt that this guess is correct). Perhaps, you can make guesses based on your knowledge of the potential content.

Rafał is by no means sure that the five cryptograms are solvable at all. In case it is possible, he has done some helpful preliminary work. First of all, here is a transcription table for cryptogram #3: 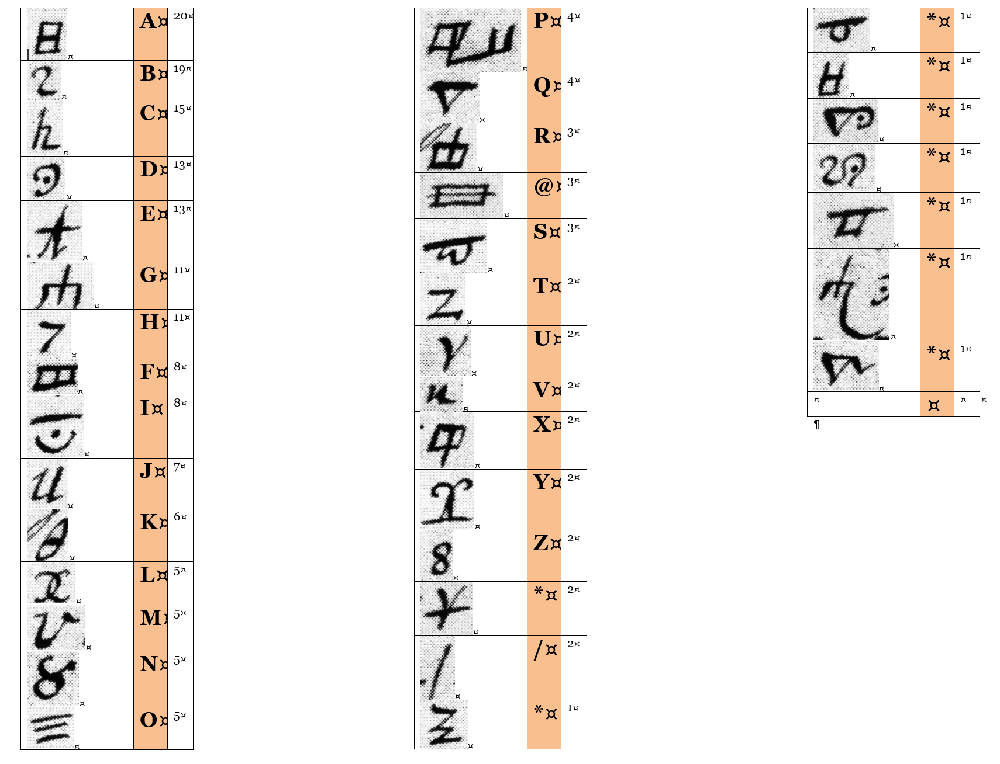 The following graph shows a frequency analysis, also for the third cryptogram: 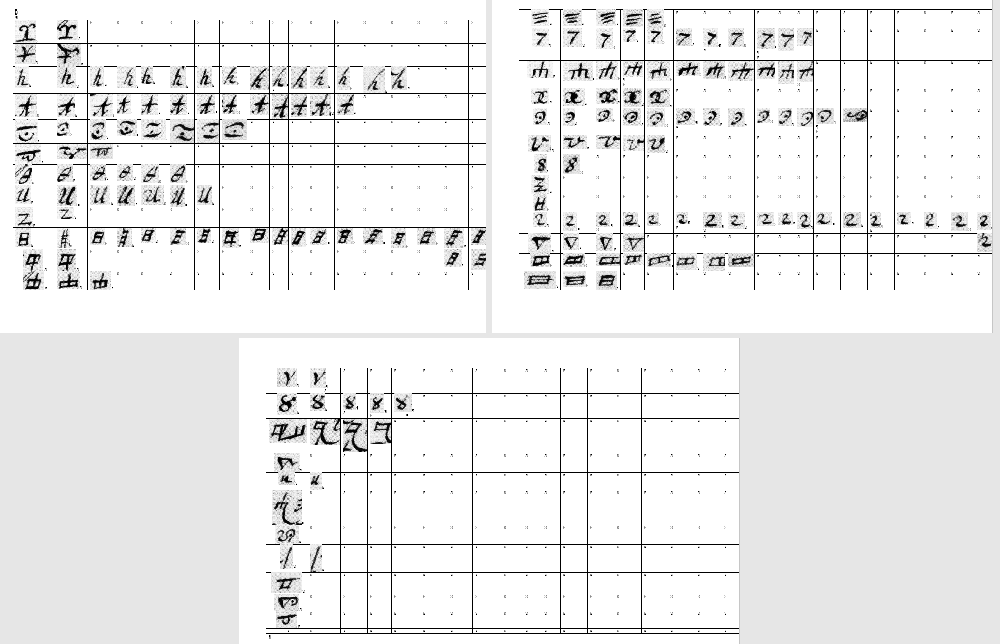 Also, here is an Excel file provided by Rafał with a transcription as well as an editable substitution table.

Does anyone manage to solve the cryptograms with these tools?