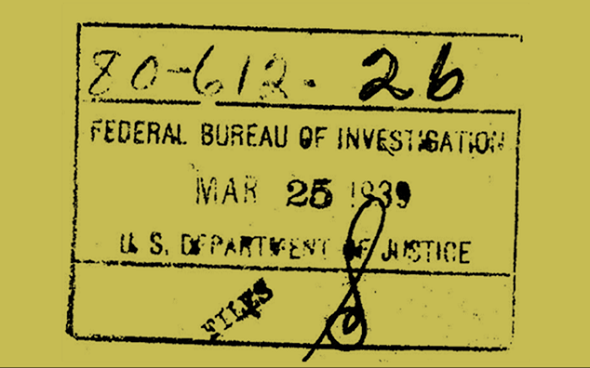 The FBI has recently declassified crypto-related files from the 1940s. These files contain a number of amusing stories.

As  mentioned before on Klausis Krypto Kolumne, the FBI operates a unit named CRRU (Cryptanalysis and Racketeering Records Unit), whose task is to break encryption codes used by criminals. Unfortunately, most of the CRRU work is classified. There are hardly ten criminal cases involving CRRU codebreaking that were covered in the media.

Last year CRRU codebreaker Dan Olson gave a presentation at the Cryptologic History Symposium in Fort Meade, Maryland. It was a great honor for me to speak in the same session. My talk was about unsolved crimes involving unsolved cryptograms.

Dan’s presentation was highly interesting, although he only spoke about cases already known to me.

Now the FBI has declassified a number of files containing new information about their codebreaking work (thanks to blog reader Dr. Ralf Bülow for the tip). This material is available via the webseite “The Black Vault“. The files, which comprise about 360 pages provided in one large PDF document, stem from the time period between 1935 and 1975. When scrolling through the PDF pages, I was hoping to find new information about spectacular crimes involving spectacular encryption codes – but this did not happen. Instead, I found a number of interesting anecdotes (some of them even made it to the press), three of which I will introduce in this article. All of these stories took place in the 1940s.

A story covered in the declassified FBI files took place in 1943. When a man found a book with mysterious entries on the street, he informed police. What happened next is described in the follow article (“Stars and Stripes”, 1943-08-10): 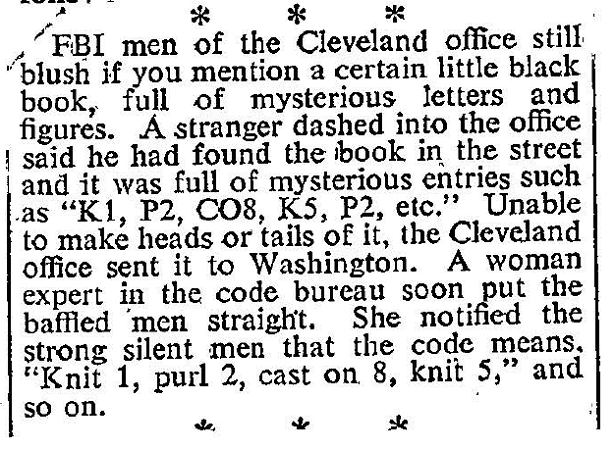 Another code encountered by FBI cryptanalysts proved to be a real one. The following article is from the Washington Post (1944-04-11): 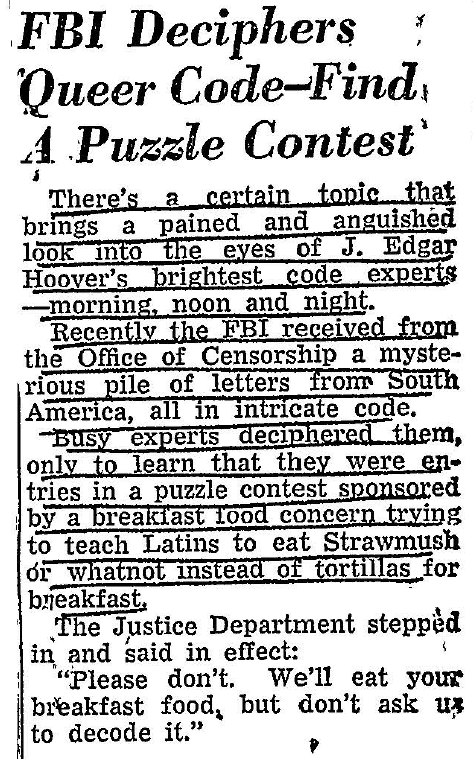 In 1942, somebody found an encrypted note at a gas station in Salina, Kansas. This note looked like this:

Can you break the encryption? It’s not very difficult.

Here is how it works: Ignore the letter X and take the first two letters of each block (the method is not entirely consistent, sometimes only the first letter counts, sometimes the third letter of a word must be included). Then you get:

Be sure to bring your lesson book and Bible Sunday May 31st.

This looks like a message sent to members of a church parish. I have no idea why something like this was encrypted.

If one omits the cleartext letters from the cryptogram the remaining message reads as follows:

Does this message have a meaning? The FBI codebreakers thought this was not the case. If you disagree, please let me know.
Follow @KlausSchmeh