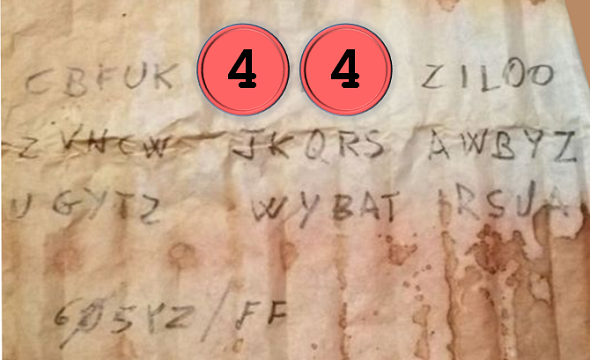 Two years ago a detectorist found an encrypted note hidden in a WW2 bullet in central Italy. Despite many tries this cryptogram is still unsolved.

In January 2015 the news portal SPLOID reported on an interesting discovery. An italian detectorist had found a small piece of paper hidden in a German bullet from World War II. The finding place was located in Southern Tuscany. This piece of paper bore an encrypted message.

A hidden and encrypted message

We deal here with a secret message that is protected with both steganography (data hiding) and cryptography (data encryption). According to the SPLOID article it was common practice among WW2 soldiers to hide notes in empty bullets, but usually these notes were not encrypted. Here’s a scan of the message (I call it “bullet cryptogram”): 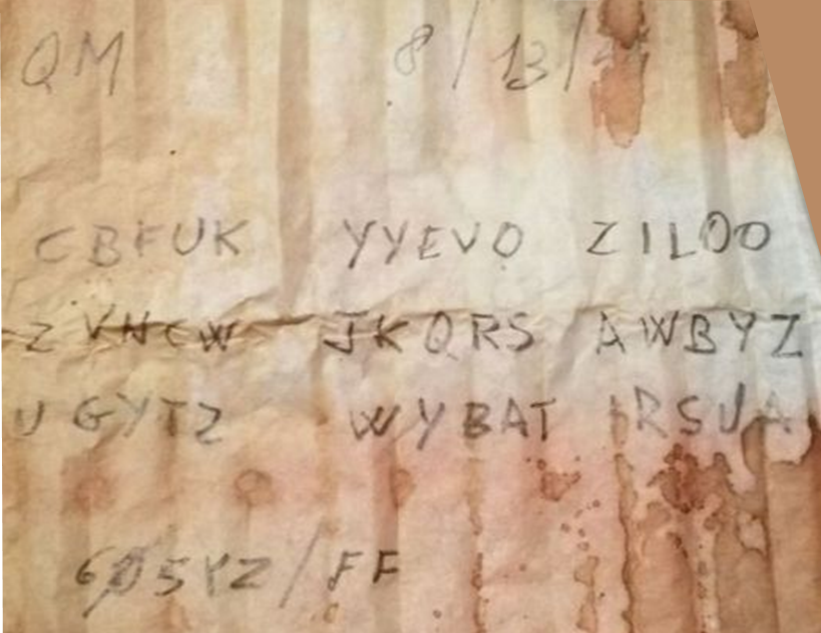 The message is dated 8/13/44. It probably stems from an allied army, which drove the German occupators from Tuscany in 1944. Here’s a transcription:

The first (QM) and the last line (605YZ/FF) probably contain some meta information. The main part of the message has 44 letters.

According to the SPLOID article, a forum poster suggested the following decryption:

The five letter codes read as follows, from left to right, top to bottom:
THEY – THROW – GRENADES – WE – PULL – PINS – AND – THROW – BACK

The final code at the bottom is a phrase:
NOTIFY REINFORCEMENTS STAND DOWN – NOT NEEDED

This means that German soldiers were throwing grenades with their safety pins on and the allied soldiers threw them back with their safety pins removed. But were the Germans really so stupid? And why would a soldier write down such a message, encrypt it and hide it in a bullet? In my view this doesn’t make sense. In addition, the poster doesn’t tell how the decryption works. For these reasons, I consider this cryptogram still unsolved.

When I wrote a blog post about this story two years ago (in German), I received many comments. However, nobody came up with a plausible solution.

My guess is that this message was encrypted with a British or American field cipher. A field cipher is an encryption method that can be used by hand or with a simple device. Cipher machines like the German Enigma or the British Typex are not considered field ciphers as they are too heavy for carrying them around and not very robust. A common British field cipher was the Slidex: 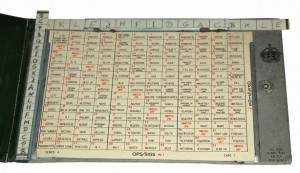 However, Slidex ciphertexts contain both letters and digits, while the bullet cryptogram consists only of letters. There must have been dozens of other British field ciphers in WW2, but there is surprisingly little literature about this topic.

The most popular US field cipher of the time was the M-209, a small and robust encryption machine. As I will show in one of my next blog posts, the M-209 was far from unbreakable. 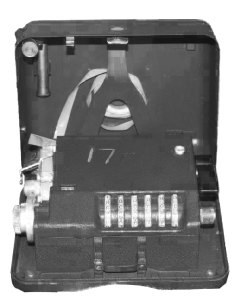 Other US field ciphers, like the M-94 or the M-138 were already outdated in 1944, but were still used as backup devices.

The bullet cryptogram is an unsolved crypto mystery. Can a reader solve it?
Follow @KlausSchmeh