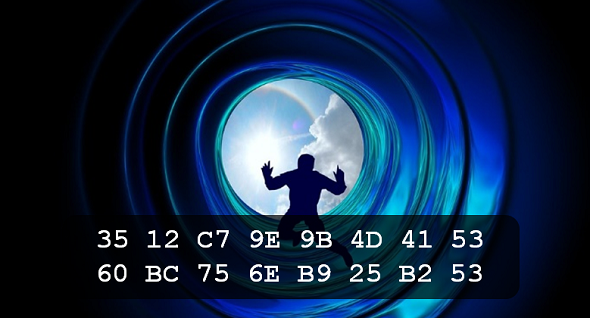 Using my key derived from a sentence, I encrypted a 16 byte message (AES encrypts blocks of 16 byte length) with CrypTool. All 16 plaintext bytes represent ASCII characters. The plaintext message begins with AA and ends with ZZ. In between there is a 12-letter-expression from the English language. Here is the ciphertext (in hexadecimal notation):

Of course, I won’t tell the key anybody before I die. After my death, I will try to send it from the beyond – if I can. If somebody receives the key, he can easily find out if it is the correct one by decrypting the ciphertext above and by checking if the result is of the kind AA************ZZ. I hope that it will last another few decades before I have the chance to transmit messages from the beyond.

Honestly, I am not very optimistic that this experiment will work. However, if it does, it will be one of the most important research results in science history.
Follow @KlausSchmeh