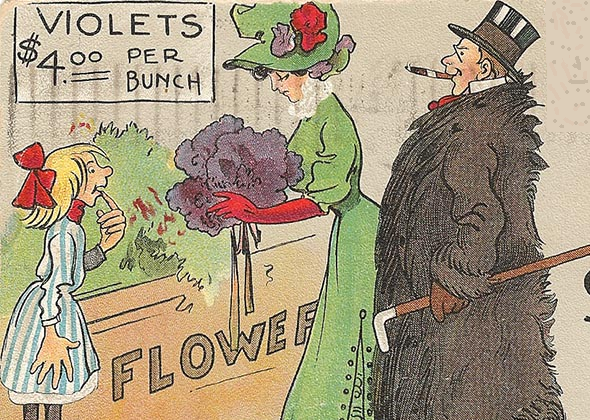 My readers are pretty good at solving encrypted postcards. However, the two specimens I am going to introduce today look pretty hard to decipher, as the messages are pretty short.

The first question I want to ask today is not about encryption but about the English language. Can somebody explain me what the motif and the text on the following postcard mean? 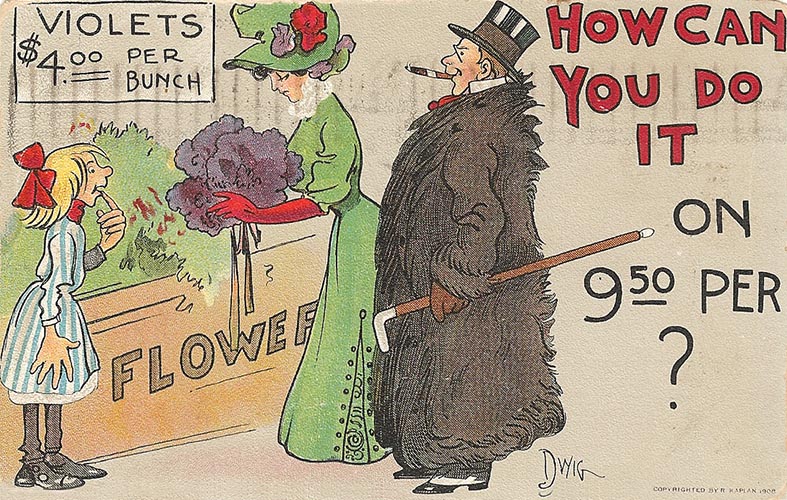 Does “9.50 per” refer to the hourly wage of the flower sales woman? If so, what does the question mean?

I found this postcard on the website of Nick Gessler, a professor at Duke University and crypto collector, whom I have met several times at the Charlotte International Cryptologic Symposium. The next issue of this event will take place in March 2018. I hope, Nick will again bring along a number of his crypto collectibles, like a cast-iron cipher cylinder from the 1920s or a Beyer pocket cryptograph.

Let’s now look at the text side of the postcard: 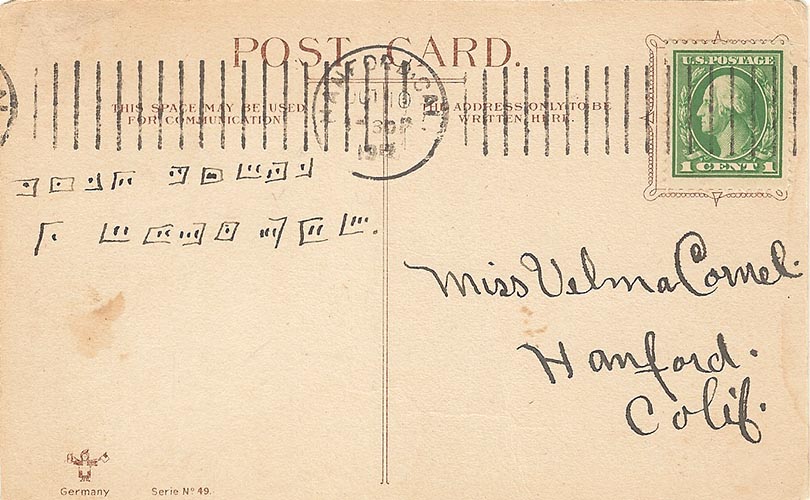 As we see, the message written on the left side is encrypted. It consists of only five words, which gives us little material to analyse. Can a reader break this cryptogram anyway?

Apparently, the recipient of the card was a Velma Camel living in Hanford, CA, a town between Los Angeles and San Francicso. The stamp contains a date, but it’s hard to read. The sender is unknown, but I’m pretty sure that he was the lover of Velma Camel (about 90 percent of the encrypted postcards I know are love messages written by young men to their spouses).

To my surprise, the word “Germany” can be read in the left lower corner. The word “Serie” (series) is German, too. Does this mean that this postcard was produced in Germany, although the motif is English?

There’s another short cryptogram I found online when googling for encrypted postcards. Here it is: 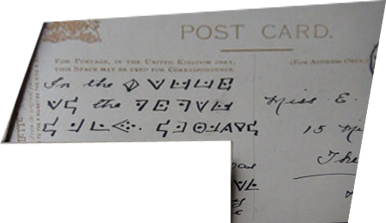 This scan stems from the The British Postal Museum & Archive blog. According to the blog post, the postcard and its solution are explained in a podcast episode. However, the link to this podcast is dead.

Can a reader solve this ciphertext, although only an excerpt is available?
Follow @KlausSchmeh