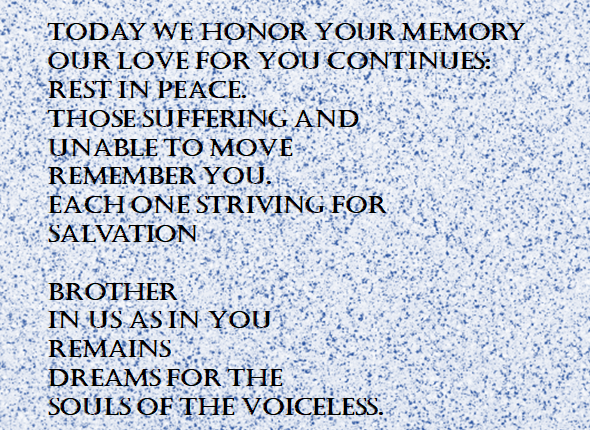 If you ever come to San Diego, you shouldn’t miss Petco Park, the baseball stadium of the San Diego Padres. Petco Park is named after the San Diego-based pet supplies retailer Petco. The reason why this place is interesting for crypto enthusiasts is a steganographic protest message that is hidden in an inscription outside of the concourse.

A secret message in a dedication

During stadium construction, the Padres offered fans the chance to purchase bricks and to dedicate them. The US animal rights organisation PETA tried to purchase one of these bricks and to use the dedication to protest Petco’s treatment of animals (PETA and Petco have a long-standing dispute over this matter), but the Padres rejected this enquiry. Hereupon, PETA tried to buy a brick anonymously – successfully. Here’s the dedication they wrote upon it: 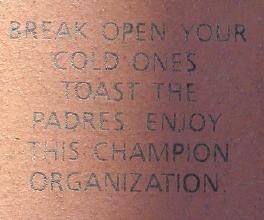 BREAK OPEN YOUR COLD ONES TOAST THE PADRES ENJOY THIS CHAMPION ORGANIZATION.

This strange sentence contains an encrypted message. When one reads the first letter of each word, it forms the following text: BOYCOTT PETCO. The Padres along with Petco decided not to remove the brick or the dedication, assuming that most people wouldn’t notice the hidden meaning anyway.

A text in which the first letter of each word or paragraph spells out a message is referred to as acrostic. Here’s an example I found on Wikipedia (created in 1850 by Nathaniel Dearborn): 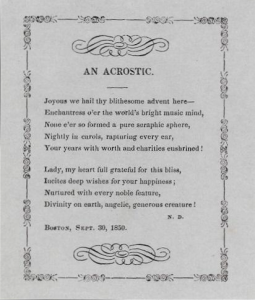 My book Versteckte Botschaften- Die faszinierende Geschichte der Steganografie contains a whole chapter about acrostics. I had no trouble finding enough content for this chapter, as there are plenty of acrostists in poems, tombstone encryptions, novels, and many other texts. Among the most famous acrostics is the “Fuck you” tombstone in Montreal, Canada, which I had the pleasure to visit a year ago. 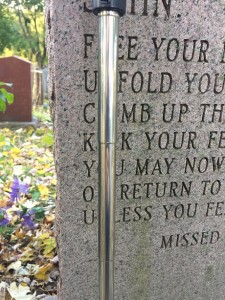 The acrostic in the tombstone inscription transmits is a kind of protest statement put forward jointly by the ex-wife and the girl-friend of the man burried here. To my regret, I don’t know any details about this background story. Perhaps a reader can find out more.

As readers of this blog might know, the “Fuck You” tombstone is by far not the only tombstone with a hidden or encrypted message. Check here for an overview.

Apart from the “Fuck you” tombstone, there is another tombstone bearing a hidden protest message. This one has been created to protest the violation of animal rights, just like the brick in Petco Park. The tombstone stands on the grave of PETA member Matt Prescott, who died in 1981. The interesting thing about this grave is that it is located next to the place where Harland D. Sanders (1890-1980) was buried, at Cave Hill Cemetery in Louisville, Kentucky. Sanders might be unknown to most readers, but I am sure that almost everybody has seen a picture of him before. Harland D. Sanders was the founder of the Kentucky Fried Chicken (KFC) restaurant chain. His portrait can be seen in every KFC restaurant, as well as on many KFC items. 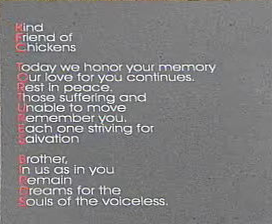 Today we honor your memory
Our love for you continues:
Rest in peace.
Those suffering and
Unable to move
Remember you.
Each one
Striving for salvation

Brother
In us as in you
Remains
Dreams for the
Souls of the voiceless.