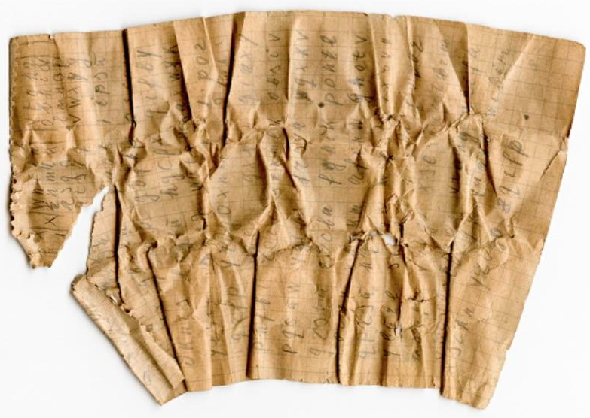 A Reddit user recently purchased a cryptologic document from the Second World War. Can a reader make sense of it?

Earlier this week, I blogged about an unsolved cryptogram from the First World War. Codebreaking experts, such as George Lasry and Thomas Bosbach, have meanwhile confirmed that the message I introduced is probably encrypted with the Playfair cipher. However, the ciphertext is quite short, which makes it difficult to find the key. We’ll see, if one of my readers can break this message anyway.

Blog reader masso spora has now informed me about another crypto mystery. This one apparently stems from the Second World War. It was published in the Reddit group /r/codes. Readers of this blog know that this Reddit group is a source I have used many times before.

When trying to solve a crypto mystery, it is always helpful to have some background information about it. For instance, knowing the person who created a cryptogram along with the creation time and the creation place will help a codebreaker to make guesses about the cipher and the plaintext language used. However, in this case not much seems to be known about the background of the item in question. The Reddit user posted only three sentences: “Found this in the bottom of a US messenger bag from WW2 that I bought in France. Any info on what type of code it could be? Or who can help me decipher?”

Here’s a scan of the sheet in question: 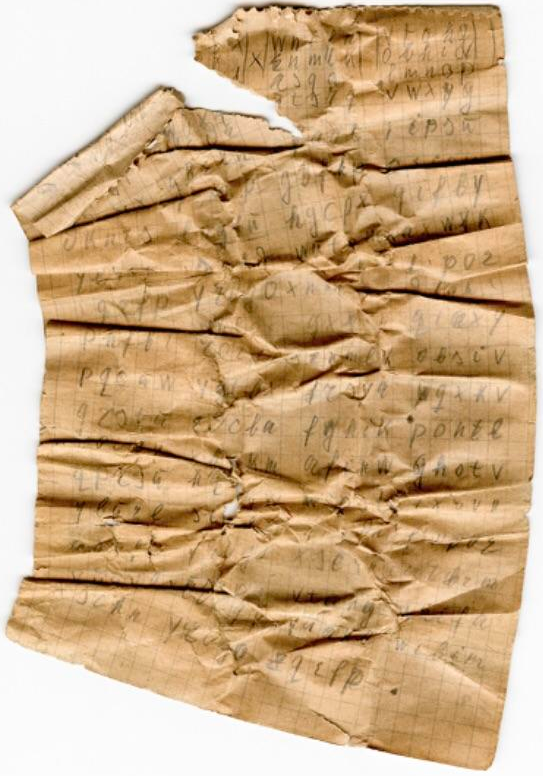 To my regret, the letter groups on the sheet are hard to read because the paper is wrinkled.

Is it a ciphertext?

The most obvious question about this sheet is: what do the letter groups written on it mean? The most obvious option is that they represent an encrypted message. The writing style reminds me of German Enigma messages from WW2, like the following: 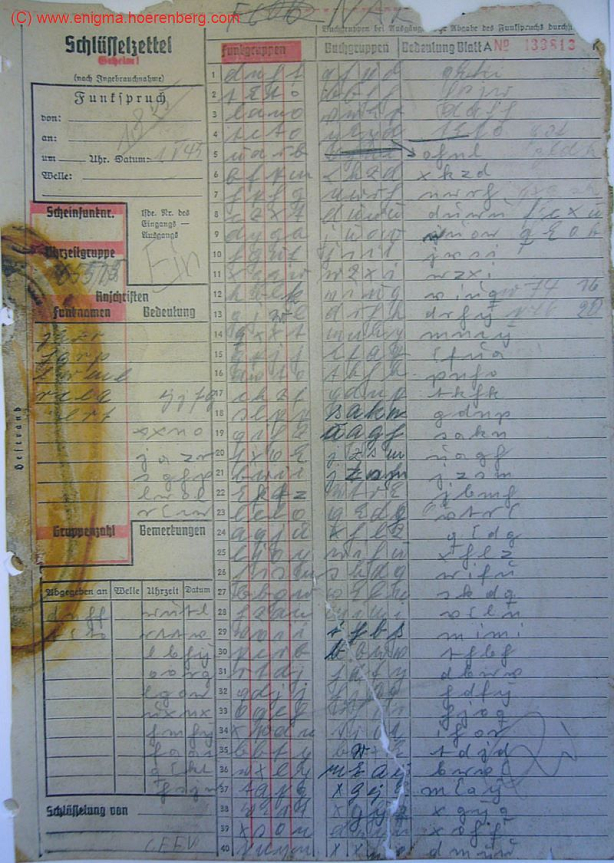 Both the sheet from France and this Enigma message contain only lower-case letters, and the characters are easily distinguishable. German army radio operators in the Second World War were trained to write down in-coming and out-going messages this way in order to avoid reading errors. However, unlike all hand-written Enigma messages I know, the Reddit text is not noted on a form.

As a large part of France was occupied by the Germans in WW2, it would not be unusual that a German military cipher message was left behind there. However, this sheet was found in a US bag. Finding US military items from WW2 in France is far from uncommon, as US troups landed in northern France on D-Day before they proceeded to Germany. Perhaps, a reader knows, whether this writing style was typical German or whether US cipher clerks wrote in a similar way.

If this letter sequence is a cipher message, we still need to know which encryption method was used. Of course, the Enigma (German) and the SIGABA (US) are possible, but there were many other manual and machine ciphers in use, as well.

And then, there is the question if these letter groups represent a cipher message at all. One of the Reddit commenters suggests that this text might be a One Time Pad (OTP) key (i.e., a random sequence that is meant to be added to a plaintext). Many OTP key examples are shown on Dirk Rijmenants’ website. However, in my view, the OTP key hypothesis is most likely wrong. The OTP was not yet in widespread use in WW2. In addition, I have never seen an OTP key written by hand – it is easier to create a random sequence with a typewriter or some printing device.