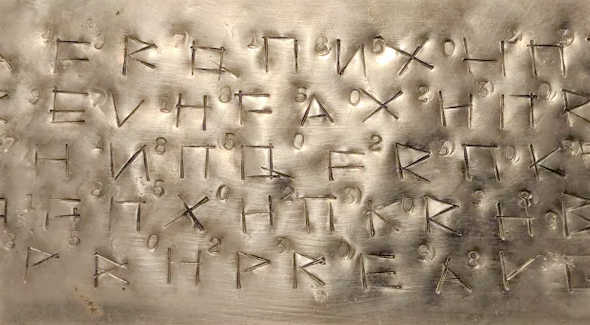 A Reddit user has posted a strange cryptogram engraved on a metal plate. Can a reader make sense of it?

Once again, an interesting crypto mystery has shown up in the /r/codes group on Reddit. Under the headline “Does this look like a code to anyone?”, a Reddit user named Zenfoam asks about a message engraved on a metal plate. For copyright reasons, I can only reproduce the message itself (to see the whole plate, check the Reddit article):

The letters are from the Russian alphabet (cyrillic), which includes characters such as И and Г. So, the plaintext encrypted here might be written in Russian. In front of or behind almost every letter a number is written. While the letters look like they were engraved by hand, the numbers must have been made with some kind of stamp. Here’s a transcription.

When examining a cryptogram, it is always helpful to have some background information. To my regret, as good as nothing about the background of this plate is mentioned in the Reddit post. All there is available is the following comment by Zenfoam: “I just found it on its own. I’m afraid, it’s not obvious in the pic, but the bottom has a ledge that comes out forwards, I use it to store letters on. […] I found it in my loft back in 2001 when I moved in, the previous owners had been here since the 70s at least.”

Can a reader make sense of this message?
Follow @KlausSchmeh

Further reading: Russian crypto mystery solved by a reader of this blog