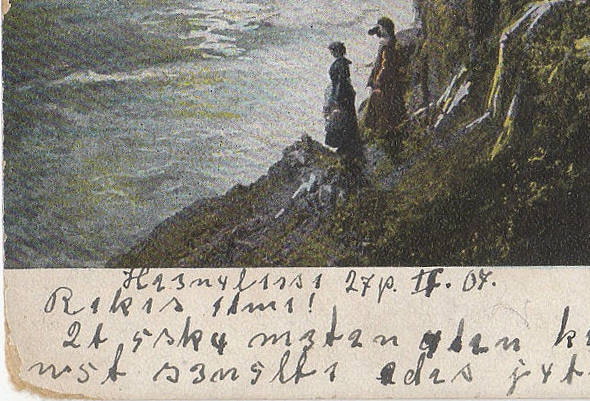 In 1907, a young woman from Orimattila, Finland received an encrypted postcard. Can a reader decipher it?

When it comes to finding interesting cryptograms, Google is always a good source. Yesterday, I tried my luck once again with the search term “encrypted postcards”, which proved successful. Besides scores of links on my own blog articles, I found two nice cryptograms I hadn’t known before.

A postcard from England

My first find was an article titled A cryptic postcard unlocked, written by Ray Girvan and published in 2014 on the website, Journal of a Southern Book Reader. This post introduces the following encrypted postcard from 1913, provided by John McConnell (only the text side is available): 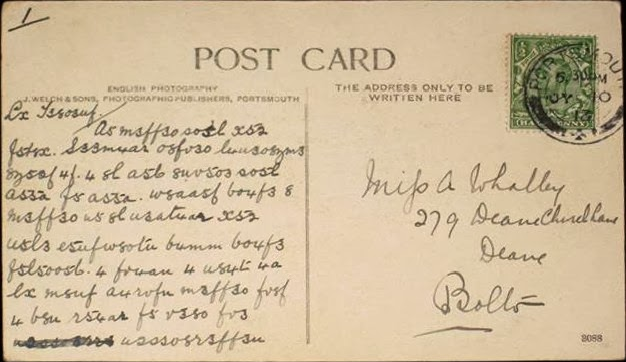 Girvan appears to be familiar with the basics of codebreaking. He writes about this card:

It was posted from Portsmouth – date unclear – to a Miss A Whalley, 279 Deane Church Lane, Deane, Bolton, and contains a coded message. Luckily the handwriting is very legible. It smelt of a simple monoalphabetic substitution cipher, and going from a couple of guesses – that “4 8l” = “I am”, and that only “noon to noon” made sense for “a55a f5 a55a” – it turned out to be just that, and I managed to decrypt it without great difficulty.

My dearest /
No letter from you today. Feeling rather miserable
about it. I am now ashore from noon to noon. Cannot
write a letter so am sending you some postcards. Will
write tomorrow. I think I said in my last nights letter
that I was going to hear the suffragettes.

Like the vast majority of encrypted postcards I have seen, this one was written by a young man to his lover. Suffragettes were militant women in the early 20th century who fought for the right to vote.

A postcard from Finland

The second postcard I found appears to be still unsolved. It’s currently available for sale at the online market place, Etsy. Here’s the picture side: 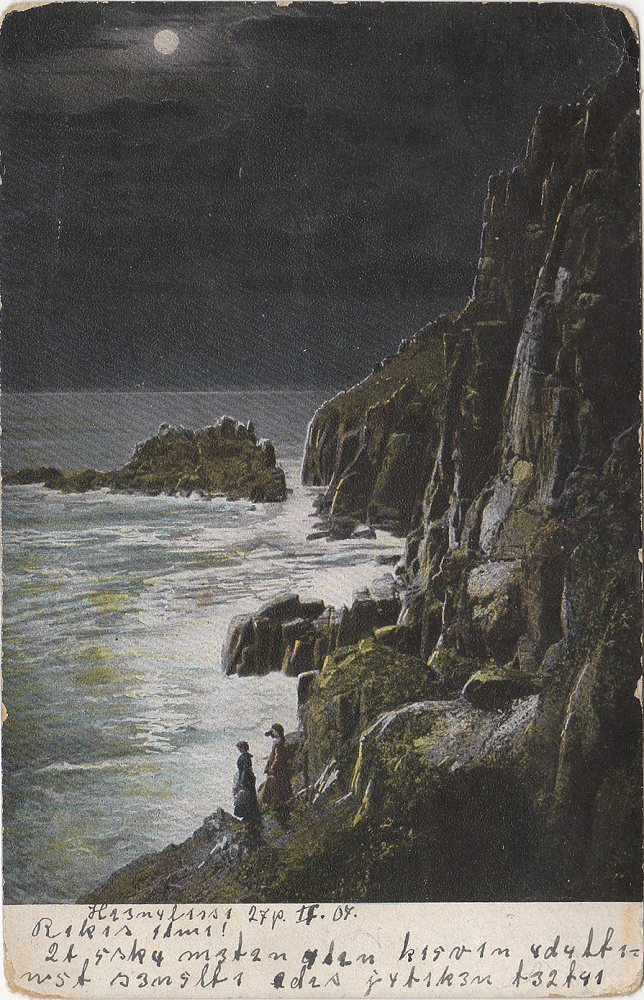 At the bottom of the card there is some encrypted text, which includes a date, perhaps 27/2/1907. The motive shows two people at a sea coast; I have no idea where this is and if it is a real place at all. Let’s look at the text side: 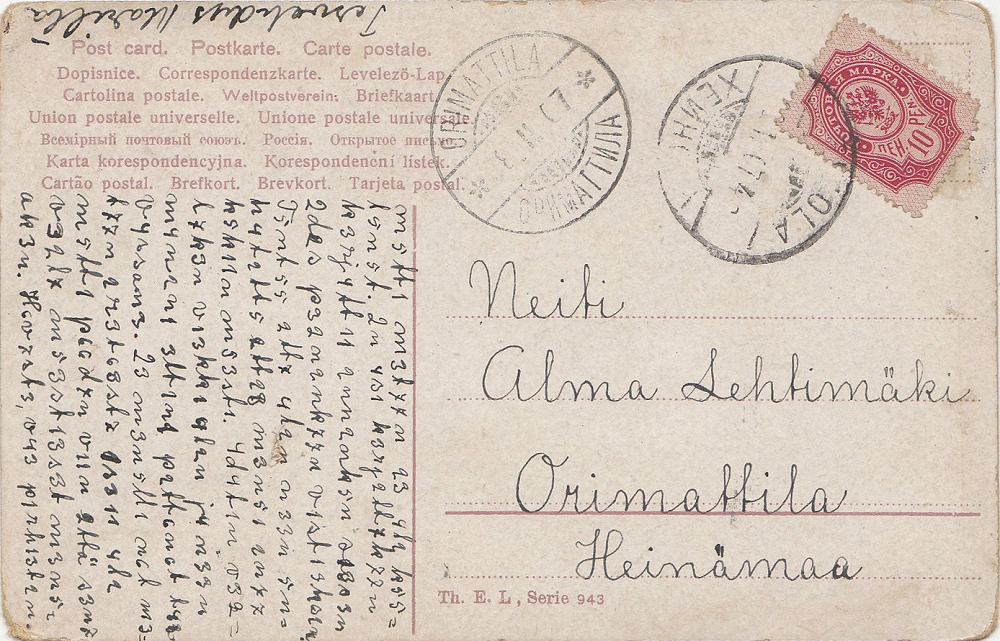 The receiver of the card was a Neiti (Finnish for “Miss”) Alma Lehtimäki living in Orimattila, Finland. Heinämaa is a borough of this town. The fact that this card was sent to an unmarried woman suggests that we are again dealing with a message sent from a young man to his lover. The card was sent from the Finnish town of Heinola, about 50 kilometers to the north of Orimattila.

The following two words (cleartext?) can be read at the top:

The encryption sytem used is probably a simple substitution cipher (MASC), which is usually not hard to break. However, the language might cause some problems. My guess is that the plaintext is written in Finnish – not only because the postcard is from Finland, but also because the average word lenght is high and there are as good as no one-letter words. Both is typical for the Finnish language.

So, if you can read Finnish or if you look for a tough challenge, try to break this cryptogram. I’m looking forward to your comments.
Follow @KlausSchmeh