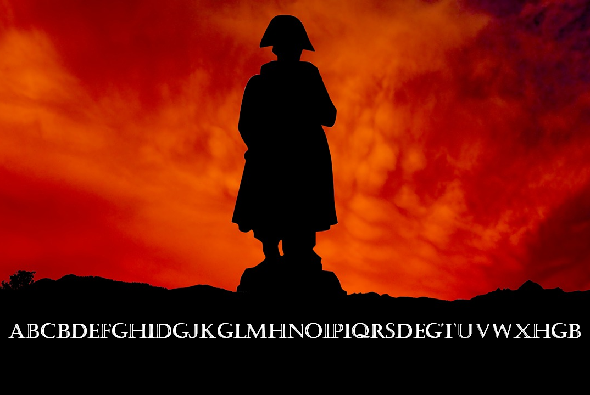 A sword showcased in a Havana, Cuba museum bears an encrypted inscription. Can a reader decipher it?

Four weeks ago, a Reddit user calling himself VinceClorthoEC posted a number of photos of a Napoleonic sword that bears a cryptic inscription. For copyright reasons, I can’t repost these pictures here, but I can provide an excerpt that shows the message. Here it is (click on the picture to enlarge):

The sword currently resides in the Museo Napoleonico in Havana, Cuba. It was acquired by Julio Lobo, a Cuban industrialist in the 1940s/50s. His collection of Napoleonica at the time was the largest and considered to be the best outside of France. After the Cuban revolution, his collection formed the vast majority of the new Museo Napoleonico. There’s not much more I can tell you about this specific sabre except that there are 2 or 3 examples of sabres sold at auction with similar styles of writing … but not the same.

The inscription consists of 37 letters and is based on a 24-character alphabet. Considering that this sword is about 200 years old and that sword makers usually weren’t knowledgeable in cryptology, it seems likely that the encryption system used is a simple one. As monoalphabetic substitution (MASC) is an obvious candidate.

Anyway, it might be difficult to solve this cryptogram with standard methods such as frequency analysis and word guessing, as it is short and doesn’t include spaces. In addition, the plaintext language is not known, though French and Latin appear to be options. I could imagine that a hill climbing attack might work if it takes different languages into account.

The fact that there are 24 different letters in such a short cryptogram is unusual. One possible explanation is that diacritic letters such as E, É, and È are encoded in different symbols. If this assumption is correct, Latin and English are unlikely plainext languages, as these don’t have diacritic letters. French, on the other hand, might be a good fit.

Can a reader break this encryption? In addition, I would be interested to know if other swords of this kind are known to exist. According to the Reddit post, this is actually the case, and similar swords were on auction. It goes without saying that additional ciphertext would be helpful for breaking the cipher. Perhaps, a reader can find out more about this.
Follow @KlausSchmeh