A cryptological cold case: the microcryptogram that can’t work

Seven years ago I blogged about an unsolved cryptogram consisting of only 11 characters. In the meantime, I call such a thing a microcryptogram, but I didn’t use that term back then.

The interesting thing about this puzzle is that it is based on a seemingly impossible encryption method. Although there were some interesting comments at the time, no one found a solution. Therefore, after seven years, I would like to present this cryptological cold case again today.

The microcryptogram in question was written by one N. G. Wilkins. Therefore I called it “Wilkins cryptogram”. The reader Hans Jahr had pointed it out to me after he had discovered it in the following article from the journal “Notes and Queries” (dated June 14, 1862): 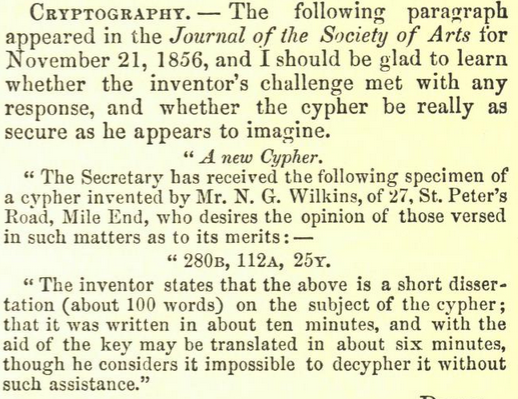 If you take the article literally, it says, “The sequence of letters ‘280B, 112A, 25Y’ is the encrypted version of a 100-word text, according to a Mr. Wilkins. The reader is supposed to crack this encryption.”

My first impression was: this can really only be a misprint. So I looked in the original source mentioned in the article (“Journal of the Society of Arts”, Nov. 21, 1856). There I found the following: 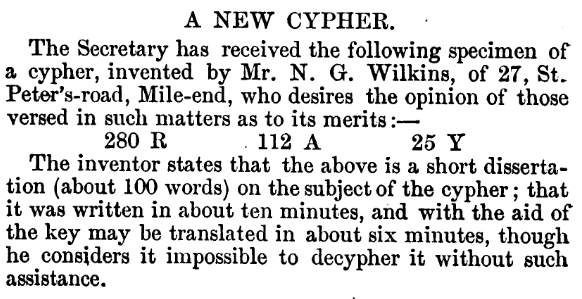 Quelle/Source: Journal of the Society of Arts

So it says almost the same thing here. The only difference is that the first character group contains an R instead of a B – probably a printing error in the former article. Apart from that, Mr. Wilkins probably actually meant it this way: “280 R 112 A 25 Y” stands for an encrypted text containing about 100 words. The encryption method is not specified.

The plaintext, according to the article, is a short treatise on encryption. It is said to have taken about six minutes to encrypt this text.

But how do you encrypt 100 words in just eight numbers and three letters? Actually, you can’t. The only possibility I can see is that there is another document referenced by these characters. According to this, it would have to be something like a dictionary code or a codebook code.

The most probable would be a codebook code. In 1862, when the cryptogram was created, there were already codebooks with tens of thousands of entries, which also contained whole sentences. An (invented) example would be “the delivery arrived today”. Perhaps the character blocks 280R, 112A, and 25Y each refer to a long sentence in a codebook. This would certainly add up to 100 words.

A dictionary or other book could certainly be used in a similar way. Of course, it is misleading to claim to have encoded 100 words in 11 letters in this way, but it is not entirely wrong.

It may help to know a little more about N. G. Wilkins, the inventor of the puzzling method. Richard SantaColoma has found out that his full name was Nathaniel George Wilkins and that he was a minister by profession. He wrote a book entitled Errors and Terrors of Blind Guides in which he rejected the “doctrine of perpetual pain.” Unfortunately, I have no idea what this doctrine is all about. Perhaps a reader will know more.

Richard has also found evidence that Wilkins was involved in cryptography. In particular, the latter published a book called “The Alaric 3 Cipher” in 1904, which I think exists in the British Library. Other than that, I haven’t found anything about this work anywhere.

Finally, of course, it is also possible that Wilkins got something mixed up in connection with his microcryptogram. Several readers have pointed this out. Perhaps “280 R 112 A 25 Y” is not the ciphertext, but the key. Or Wilkins simply didn’t understand how encryption works.

Can any readers say more about this cryptological cold case?