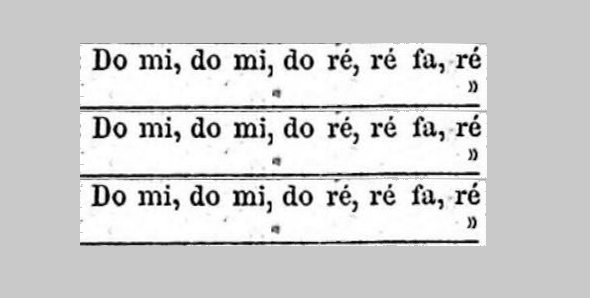 Today I present some more coded newspaper ads from France that Didier Müller has tracked down. One of them contains musical notes whose meaning is unclear.

A few weeks ago, I asked my readers if they knew anything about coded time announcements from France. That there were such in the 19th century is mentioned in the literature. However, I had never seen one.

With blog reader Didier Müller from French-speaking Switzerland, my article fell on particularly open ears. He went in search of coded advertisements in an online archive of the newspaper “Le Figaro”, found what he was looking for, and put an entire database on the subject online. In the meantime, no fewer than 390 encrypted newspaper ads are available there. I am completely enthusiastic and will certainly blog more often on this topic.

So far Didier has identified 22 encryption methods used in the Figaro ads. He was able to decrypt over half of the cryptograms using them. The encryption methods used are mostly quite simple. However, there are also many short ads that should be difficult to crack despite simple encryption. In addition, there are many messages that are probably only understandable to insiders, such as the following one from January 24, 1875:

As far as I can see, the Figaro ads were almost all published by lovers sending secret messages to each other. I have not yet noticed any coded advertisements from businessmen, polar explorers and private detectives that existed in Great Britain at the same time.

Let’s look at two more unresolved ads from Didier’s collection. The first one dates from January 16, 1890:

Here is another ad from May 6 of the same year:

Can a reader solve these messages?

And finally, once again I would like to ask the musicians among my readers for help. One ad that Didier has not yet been able to solve reads as follows:

As you can see, the terms do, re, mi and fa occur in it. This corresponds to the notes c, d, e, and f. Does any reader know a piece of music that contains these? It could be the beginning of a melody in C major.

I will gladly accept musical and cryptological hints.

Further reading: Can you break this encrypted newspaper ad from 1888?