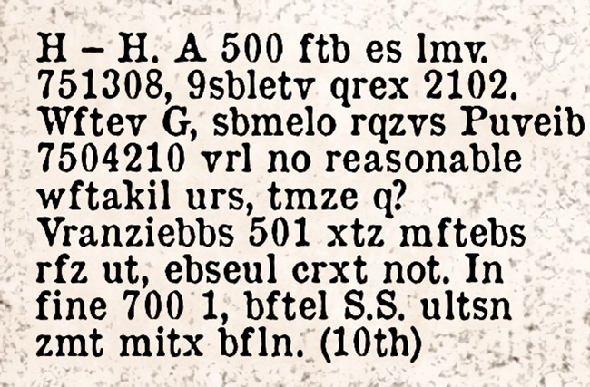 In 1888, an encrypted advertisement was published in the “Daily Chronicle”. Can a reader decipher it?

Tony’s book introduces over a thousand encrypted newspaper advertisements from Victorian England. It’s a treasure trove for everybody interested in authentic cryptograms. Tony has deciphered most of these ads, but there are exceptions. On this blog, I published many an article about these advertisements.

Many of the encrypted ads covered in Tony’s book contain love messages (this is why the newspaper section where they were published was referred to as “agony column”). Others texts placed by business people in order to send news to partners or customers. Ignatius Pollaky, a private investigator of the Victorian era, communicated via encrypted newspaper ads, too.

Some of the ads in the book make long series, the longest of which consists of over 50 parts. The advertisement I am going to introduce today is a single one. It was published in the Daily Chronicle on February 13th, 1888. It’s the only encrypted ad from this newspaper Tony couldn’t solve.

My guess is that this message has been assembled with a mixture of at least three techniques:

Here’s a frequency analysis of the letters made with CrypTool 2 (a new version of this software is going to be released soon):

The frequencies are consistent with a simple substitution cipher (MASC). It’s unlikely that a more advanced substitution system, such as a Vigenère, has been used – otherwise the distribution would be flatter.

The letters E and T, which are the most frequent in the English language, are the most frequent in this ciphertext, too. Such a phenomenon is typically encountered in a transposition ciphertext. Other frequencies, particularly of the letters B, A, and O, don’t fit with the English language very well, but this might be due to the short length of the text. So, a transposition is certainly an option.

Most encrypted ads were written by lovers, seeking a secret way of communication. This one, in my view, looks more like a message sent for business purposes. It might be an order or a note about revenues. In the 19th century, a newspaper advertisement often was the best way to send a message to a person that was travelling and could not be reached via a postal address. The ad we are dealing with might or might not be a message of this kind.

Can a reader make sense of this cryptogram? If so, please let me know.
Follow @KlausSchmeh