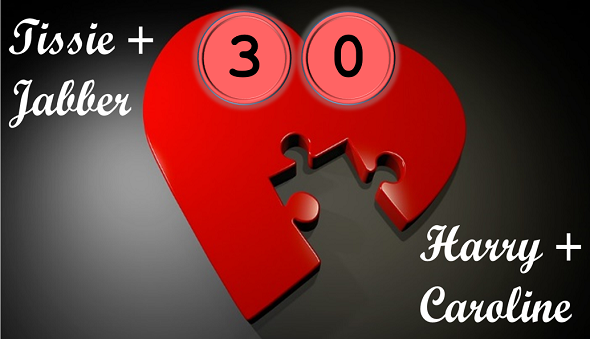 Tissie and Jabber as well as Harry and Caroline were two amorous couples, who exchanged encrypted messages via newspaper ads more than a century ago. Their encryption codes are unsolved to date.

The book The Agony Column Codes & Ciphers by Jean Palmer (i.e., Tony Gaffney, a reader of this blog) is a very interesting one. It presents over a thousand encrypted newspaper ads from Victorian England. While Tony has solved many of these cryptograms, some still wait to be deciphered. On Klausis Krypto Kolumne I have covered, some of these.

According to Tony’s book, the following ad was published in the Evening Standard on March 24, 1863:

To my knowledge, nobody has ever deciphered these two messages. After my first blog post about these cryptograms (in German) two years ago, I received a number of interesting comments, but no convincing solution.

Many of the encrypted messages in Tony’s book were sent by lovers. It is therefore likely that Harry and Caroline were an amorous couple. It would be very interesting to find out what they wrote each other. Maybe a reader can help.

Almost four decades after the encrypted Harry-Caroline conversation the following ad was published in the Daily Mail (September 14, 1901):

Here’s the reply, which was sent two days later::

Again, this looks like an exchange of encrypted messages between two lovers. The solution is not known  to me.

I blogged about these cryptograms in July 2015 (in German). There were 25 comments, some of which were very interesting. Thomas Ernst  wrote that the four-letter groups (dbno, cnod, …) might refer to trifecta and superfecta horse bets. This is certainly an interesting hypothesis, as horse bets were very popular in Victorian England.

If a reader has other ideas how these cryptograms can be solved, please let me know.
Follow @KlausSchmeh

Further reading: How a German World War II spy hid a message in a love letter