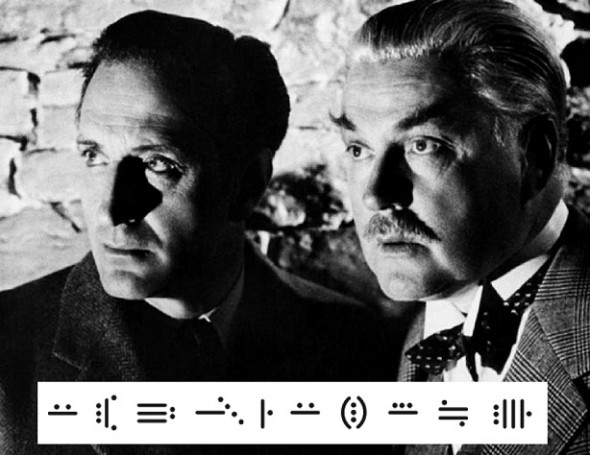 A recent article in the Sherlock Holmes fan magazine “The Baker Street Chronicle” reports on the relationship between the world’s greatest private detective and cryptology. In addition, it covers a few unsolved cryptograms from a real Victorian investigator.

Sherlock Holmes, the great private detective, had a profound knowledge of cryptology. This is proved in the short story The Adventure of the Dancing Men, in which Holmes and his assistant Dr. Watson have to solve a murder case involving secret writing. With his knowledge of frequency analysis, Holmes breaks a number of cipher messages and fakes another one, which finally leads to the murderer being found guilty.

The Adventure of the Dancing Men was one of the reasons that caused German Sherlock Holmes enthusiast Nicole Glücklich to write an article about Sherlock Holmes’ relation to cryptology for the fan magazine The Baker Street Chronicle. In the course of her research, Nicole came across this blog and read my articles about Ignatius Pollaky (1828-1918), a real private detective in Victorian England. Pollaky certainly was a real model for the Sherlock Holmes character invented by Arthur Conan Doyle.

Like Sherlock Holmes, Pollaky had some knowledge about ciphers. This became clear to me when I read the book The Agony Column written by Jean Palmer (i.e., Tony Gaffney, a reader of this blog). This great book introduces hundreds of encrypted or otherwise interesting advertisements published in British newspapers in the 19th century. Tony could solve most of these cryptograms, but a few are still unsolved. Today, they make great puzzles. I introduced a few of them in earlier blog posts.

In The Agony Column I found twelve advertisements signed by Ignatius Pollaky (there might be more, as he probably did not mention his name in all of his ads). A complete list is given here. The following ad was published for promotion:

1862-01-31
PRIVATE CONTINENTAL INQUIRY OFFICE. Mr. POLLAKY, formerly superintendent of the foreign department in Mr. Field’s office, and who has been entrusted during the last 12 years with the most delicate and confidential inquiries in this country and abroad, has OPENED the above ESTABLISHMENT with a view of protecting the interests of the British public in its social, legal, and commerecial relations with foreigners. Inquiries of every description, which do not come within the province of the regular police authorities can be made through this office on any part of the continent. Offices at 14, George-street, Mansion-house, E.C.

This ad was published to find a missing person:

1867-06-03
ELOPED, from here home, at T….., a YOUNG LADY 17 years of age, middle sized, slim built, wavy auburn hair of a particular golden hue, high forehead and large brown (almost black) eyes. Was dressed, when leaving, in blue silk dress and black jacket, and is supposed to be in company with a young foreign gentleman. Information of there whereabouts to be given to Mr. Pollaky, Private Inquiry Office, 13, Paddington-green. W.

The following one is written in an unknown code:

Four of the Pollaky ads listed in Tony’s book are encrypted. Nicole Glücklich asked Tony Gaffney for original scans to use them in her article. She kindly provided them for me. This ad contains a secret writing (1865-05-16):

This one is encrypted in some number code: 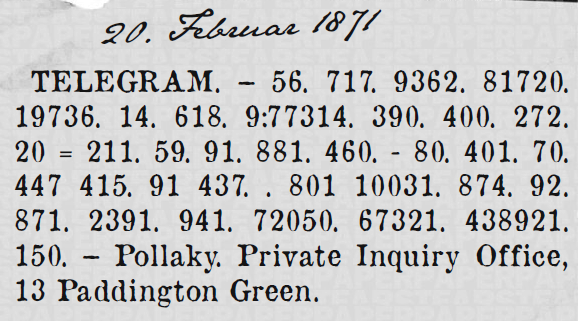 All four cryptograms are still unsolved to my knowledge. If you have an idea how to break these enccryptions, please tell me.