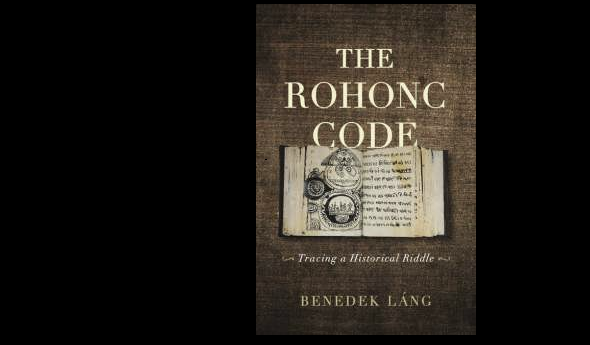 The leading Codex Rohonci expert has written a book about the Codex Rohonci. As you would expect, it is well worth reading.

The Codex Rohonci, I once wrote, has one thing in common with Pepsi Cola, Burger King, Daffy Duck, and the collie dog Bessy. While it is widely known (at least among those interested in historical cryptology), it is only number two in its category. 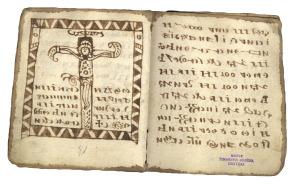 The number one among the encrypted books is without a doubt the Voynich Manuscript. Without it, the Codex Rohonci would probably be much more popular.

By the way, you can find more encrypted books on my Encrypted Book List. This list has meanwhile more than 110 entries. The Voynich Manuscript has the number 00001, the Codex Rohonci the number 00002, but this does not mean that the numbering has anything to do with the meaning of the book.

The Codex Rohonci is a handwritten book that is in the possession of the Hungarian Academy of Sciences in Budapest. It is written in a script that cannot be read and does not appear anywhere else. Probably the best website on the subject is run by Cipherbrain reader Delia Hügel.

The Codex Rohonci does not have as much media coverage as the Voynich manuscript. There are fewer websites, fewer research papers, fewer (dubious) solutions, fewer pictures of it, and fewer discussions about it. And there has been, to my knowledge, no German or English language book on it.

But the latter has changed in the meantime: A few months ago, “The Rohonc Code” was published – a book by Hungarian historian Benedek Láng. It is the English version of a work previously published in Hungarian. 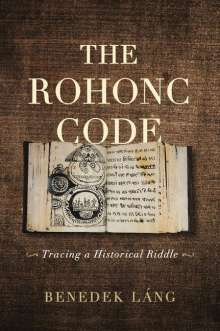 In the following photo Benedek can be seen on the far right (next to László Ritter, me and Elonka Dunin): 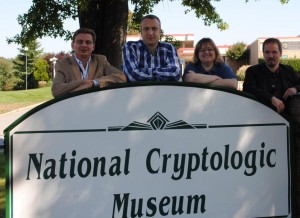 I am mentioned in the thank you list at the beginning of the book. In addition, I like the title page very much. You see, there is a photo there of a facsimile of the codex that I created. Here is the original photo:

As Benedek writes, he first knew the Voynich manuscript. At some point, however, he learned that there was a similar work in Budapest, where he lives. In 2006, he began to look into it. Since I was already interested in the Codex Rohonci at that time, I heard about Benedek for the first time.

When I gave a talk on the Voynich manuscript at the European Skeptics Congress in Budapest in 2010, Benedek was in the audience, and we met for the first time. Also present at our first lengthy conversation was Joe Nickell, a well-known member of the skeptic movement and an expert on the authentication of ancient objects.

In the days that followed, Benedek took both Nickell and me (unfortunately not at the same time for scheduling reasons) to the Hungarian Academy of Sciences to view the Codex Rohonci in the original. As one can read in the book, Nickell examined the work in detail. He found no evidence that it was a forgery.

In addition, of course, Benedek goes into the history of the codex – although not too much is known about it. The work was in the collection of Count Gusztáv Batthyány, who bequeathed it to the Hungarian Academy of Sciences in 1838. What was before is not known. A watermark indicates that the codex was made in northern Italy in the 16th century.

Of course, the various decipherment attempts play an important role in the book. Benedek gives an introduction to encryption techniques for this purpose. Its contents should hardly surprise Cipherbrain readers, but the explanations of cryptography in Hungary are quite interesting.

Since the 19th century, many have attempted to decipher the Codex Rohonci – but without convincing results. Benedek goes through all the credible hypotheses. Is the codex written with a shorthand – probably not. Is it an artificial language? Not to be ruled out. Is a person with a mental disorder behind it – unlikely. Is the whole thing just a joke – according to Benedek, no.

At the end it is about the alleged deciphering of the Codex Rohonci by Levente Zoltán Király and Gábor Tokai. The two claim that the codex was encoded with a nomenclator. I blogged about this with the headline “Top ten crypto mysteries solved.” One reason for my optimism was that Benedek had previously confirmed the correctness of the decryption. So far, unfortunately, Király and Tokai have not published a full description of their solution.

In the meantime, some doubts have been raised about the decipherment of the two scientists. I was therefore curious to see what Benedek writes about it in his book. His verdict is clear: He is still convinced that Király and Tokai are right – among other things because he has seen some unpublished parts of the solution that make sense to him.

Has the Codex Rohonci been deciphered? According to Benedek, yes. It’s time for Király and Tokai to publish more on their decipherment. In the meantime, Benedek Láng’s book “The Rohonc Code” is an exciting read.