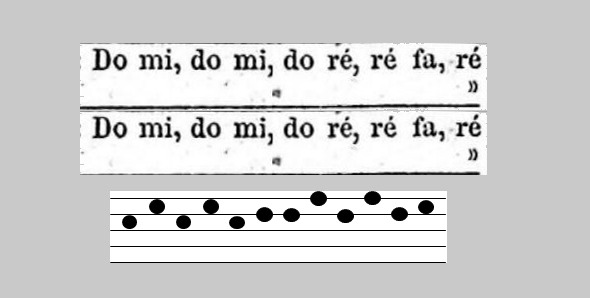 Three weeks ago I presented a musical newspaper ad. In the meantime, I have some new information that could contribute to the solution.

As reported several times, blog reader Didier Müller from French-speaking Switzerland has built up a database of encrypted newspaper ads from France over the past few weeks. In the meantime, no less than 733 entries are available there. I am completely enthusiastic.

Many of the ads have already been solved (besides Didier, other Cipherbrain readers have also contributed), but of course by no means all of them.

One ad that Didier has not yet been able to solve is from February 28, 1875, and I already presented it three weeks ago:

The advertisement can be translated as follows:

Was man weder sagen noch schreiben kann, kann man singen: Do mi, do mi, do re a, re fa, re mi. Haben Sie verstanden?

As you can see, the terms do, re, mi and fa appear in it. This corresponds to the musical notes c, d, e and f. Unfortunately, no note lengths are given. One can notate the notes as follows:

A piece of music?

The most likely explanation is that the notes in question form the beginning of a piece of music. Here is one possibility of what that might sound like:

Of course, since I set the note lengths here myself, the actual piece may sound different. Here is my one attempt to continue the melody and add suitable harmonies:

The most important finding is that the notes actually sound like a melody, which, as we know, is not always the case with a message encoded in musical notes. Does any reader know a piece of music that would fit?

Blog reader The_Piper has provided an interesting hint about this cryptogram: It doesn’t have to be a melody; instead, the Solresol art language might have been used.

Solresol is a musical-based art language developed by Frenchman François Sudre starting in 1817. The idea behind it is similar to that of the much better known Esperanto, although the implementation differs considerably.

The vocabulary of Solresol is based on the tonal syllables do, re, mi, fa, sol, la, si (or ti). Frequently used words consist of one, two or three tonal syllables. Thus si stands for “yes” and do for “no”. Doredo means “time”, dorela “year” and doresi “century”. More specific terms are formed from four or five syllables.

You can communicate with Solresol not only by speaking, but also by singing, whistling, or using symbols.

Is “Do mi, do mi, do re a, re fa, re mi”, the message from the newspaper ad, a Solresol message? Elonka Dunin, with whom I will be giving an ICCH talk on July 17, 2022, on encrypted pointing messages, has kindly asked on a Solresol forum on Discord. Unfortunately, she has received only negative responses so far. Nevertheless, I would like to ask my readers: can these tones be read using Solresol?

Also Elonka Dunin drew my attention to the fact that Solresol could also play a role in connection with the Dorabella cryptogram.

The Dorabella cryptogram is known to have been written by the composer Edward Elgar and is as yet unsolved. That Elgar as a musician knew and used Solresol seems quite plausible. Nevertheless, I have not read anything of this explanatory approach in the literature so far. Can any reader say more about this?

And finally, Elonka has raised the question whether the following unsolved cryptogram by Ignatius Pollaky has something to do with Solresol:

The matter is of course very speculative, but certainly not completely absurd. I will gladly accept any hints.

Further reading: Can you break this encrypted newspaper ad from 1888?