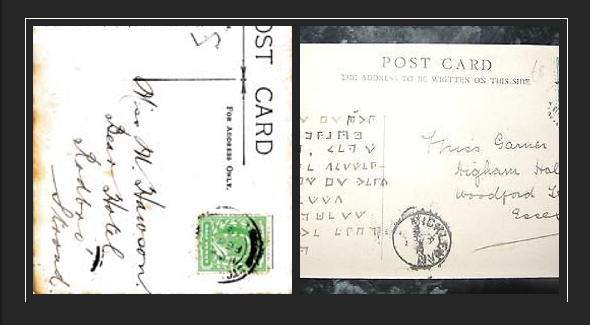 Two encoded postcards from the London and Southwest England area are waiting to be deciphered. Can my readers help?

After my readers once again solved the two featured postcards from England very quickly the day before yesterday, here are two more today.

A postcard from Woodford Green

The first geography lesson of the day takes us to Woodford Green northeast of London. On the value calculation portal WorthPoint, I discovered the following postcard sent to a young woman living in Woodford Green: 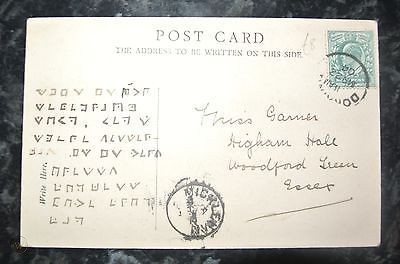 The sender may have been the recipient’s lover. The card dates from 1904 and was postmarked in Mickleham. This is southwest of London.

The encryption method used is apparently a variant of the Pigpen cipher. However, it cannot be the most widespread form, which is shown below.

Can a reader decipher the message?

A postcard from Stroud

Next, we head to Stroud in Gloucestershire. Stroud is about 20 kilometers from Cheltenham, where the headquarters of the British intelligence agency GCHQ is located today. Stroud was also home to a Miss Hawson who, according to a regional newspaper, received the following postcard a good century ago (unfortunately, I can’t discover a year): 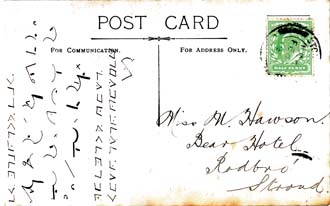 What is interesting about this card is that two codes were used at once. The middle lines are as follows:

This is not an encryption, but a Pitman shorthand. Unfortunately, I do not know it. If any reader can read Pitman, please let me know. Three more lines of the message are actually encrypted:

Apparently, we are dealing with a Pigpen encryption again. However, the standard variant shown above is not it here either. Can a reader solve these lines?