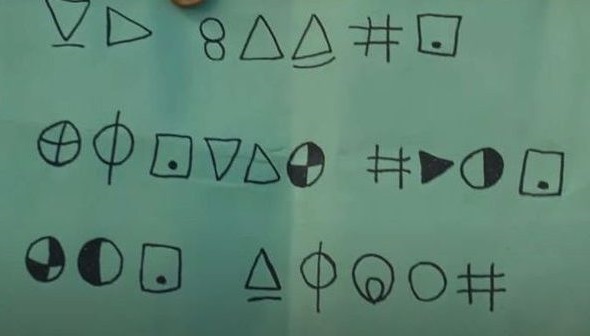 The encrypted message in the feature film “Old”

The fantasy thriller “Old” was released a few weeks ago. A cryptogram reminiscent of the Zodiac Killer plays a role in it.

Dragon Con, the world’s largest event for science fiction, fantasy, comics and popular culture, is currently taking place in Atlanta (USA). Instead of the usual 80,000 visitors, only about 40,000 are on site this year due to Corona. On the other hand, many of the program items will be broadcast on the Internet.

Like last year, I will be present again in 2021 with an online lecture. Together with Elonka Dunin, who is already a Dragon Con fixture, I will give a talk on “More Famous and Not-so-Famous Unsolved Codes” today at 10 pm (German time). To be more precise, the talk has already been recorded and will be broadcast today on Dragon Con TV. A subscription to Dragon Con TV costs $10. When I zapped in yesterday, William Shatner (better known as Captain Kirk from “Starship Enterprise”) was on. The full Dragon Con 2021 schedule is available here in 68 pages.

But now to the real topic of today. Blog reader David Oranchak, known as one of the three solvers of the second Zodiac message, pointed out to me that an encrypted text plays a role in the feature film “Old,” which was released in theaters a few weeks ago.

“Old,” a Stephen King-style thriller, is about a couple of vacationers who want to spend a nice day in an idyllic seaside cove. The horror begins when the protagonists realize that they are aging at breakneck speed in this place. They try to escape, but this proves difficult.

M. Night Shyamalan, the producer, director and screenwriter of the film, is known for including unexpected twists in the plots of his works. This is also the case with “Old.” There are even web pages explaining the confusing ending of the movie.

The said encrypted message is also an important part of the “Old” plot and provides a twist. This cryptogram can already be seen in the trailer (at 2:19):

Here is a screenshot showing the cryptogram:

The cryptogram was probably intentionally included in the trailer to make the movie popular among crypto fans. The mystery was solved even before the film was released. What role this message plays in the film was not revealed in advance, of course.

If you want to find the solution yourself, you should stop reading at this point and take paper and pen instead. The encryption is quite simple and can be cracked by frequency analysis and word guessing.

There’s no mistaking that the filmmakers were inspired by the Zodiac Killer. They may have even read my blog, like the producers of “Enola Holmes.” For comparison, here is an excerpt from the second Zodiac message:

In contrast to the Zodiac killer messages, the Old cryptogram is, as mentioned, encoded quite simply: with a simple letter substitution. The plaintext can be read on this website, for example. It reads: MY UNCLE DOESN’T LIKE THE CORAL.

Unfortunately, I have not seen the movie yet. But it seems that the decoding message helps the protagonists to leave the beach, which has become a trap. It is not clear to me, however, what use the phrase MY UNCLE DOESN’T LIKE THE CORAL has in this. Possibly the uncle is the bad guy and has something against coral, because over it leads the way to freedom. Maybe a reader has seen the movie and can give information about this.

If you want to keep the suspense, you’d better not read any comments below this article that explain the meaning of the cryptogram.

Further reading: A cryptogram in the preview for the new Batman movie