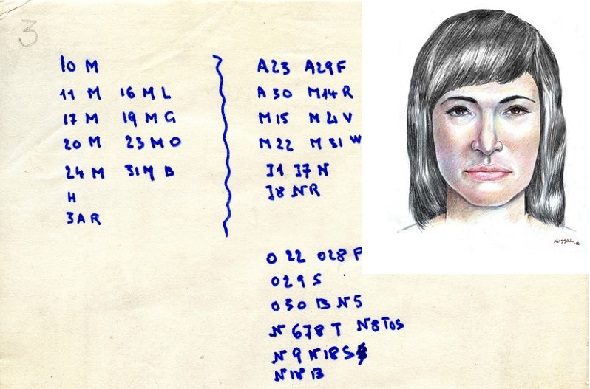 The Isdal woman and her coded message (1)

In 1970, the body of a woman was found in Norway who could never be identified. She left behind coded notes. These have not yet been fully deciphered.

On November 29, 1970, a university professor was walking with his two daughters on a hiking trail in Isdal (“Ice Valley”) near Bergen, Norway. There, the three came across a half-burned female corpse. They informed the police. 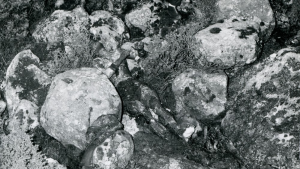 Before I continue, I would like to mention my appearance at the “Stadtgespräche” in Gelsenkirchen next Saturday.

Here you can register.

Investigators determined the cause of death to be a combination of carbon monoxide poisoning and burns. Prior to her death, the woman, now usually referred to as the “Isdal woman,” had taken more than 50 sleeping pills. Police assumed the death was a suicide, but this is disputed. 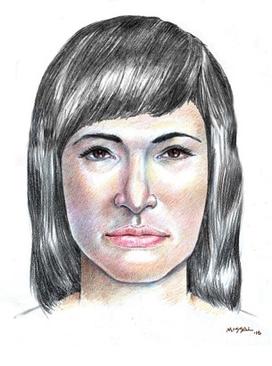 At the site where the body was found, investigators found some items such as clothes, rubber boots and empty bottles. A few days later, they were also able to match the dead woman with two suitcases that had not been collected from the luggage depository at the Bergen train station. Inside were other items of clothing as well as cosmetics, wigs and cash.

None of the items found suggested the identity of the Isdal woman. The labels had been removed from the clothing items, and the same was true of the bottles. No identification papers, credit cards, checks, receipts, tickets or airline tickets were found. However, they did find a writing pad in the suitcase, the first page of which was written on in code – more on this later.

During further investigations, the police came across numerous witnesses who had noticed the Isdal woman in the weeks before her death. Apparently the lady had traveled a lot and had used at least nine false names. She had often changed her accommodation, even within the same city. Six days before her body was found, the Isdal woman had checked out of a hotel in Bergen. After that, her trail was lost.

Eyewitnesses described the Isdal woman as elegantly dressed and 25 to 40 years old. She always pretended to be Belgian, but the addresses she gave there all turned out to be false. She used German or French expressions in forms. Here is an example of a form she filled out under the name Claudia Tielt: 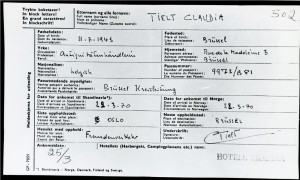 In addition to the forms, other evidence suggests that the Isdal woman was from Germany. Witnesses heard her speaking in German. An isotope analysis suggested Nuremberg as the place of origin. Later, she may have lived in France or in the French-German border area.

The Isdal woman behaved in an abundantly conspicuous manner on several occasions. For example, in hotels she was often not satisfied with her room and demanded another one. On one occasion, she unscrewed the “D” from a door marked “BAD” in order to hang it on her own room door and thus change the room number. She also repeatedly moved the furniture in her hotel rooms, sometimes even placing it in front of the door.

Who was the Isdal woman?

The Isdal woman could not be identified until today. I find this quite unusual, because actually such a person should have had friends, relatives, colleagues and acquaintances, and someone should have noticed her disappearance.

Looking at the many false names the Isdal woman used, it stands to reason that she was a spy. However, I see no reason why a spy would use nine false identities at once. On the contrary, with so many false names, the risk of making mistakes is great.

In this context, the question about the passports of the unknown lady is interesting. No identification documents were found on her, but according to witness statements, she is supposed to have shown a passport matching the false name just used several times when checking into hotels. I wonder how difficult it was to forge a passport in 1970. A secret service was certainly able to do this, which again suggests that the woman was a spy.

Or was it possible for an ordinary citizen or a criminal to get a fake passport back then? Or was it possible to cheat one’s way through by entering a passport number into a hotel form without having the accompanying passport? If such a thing was possible, the Isdal woman must not have been a spy. Perhaps she was a criminal trying to throw off any pursuers with her constant changes of place and name. Or she was mentally ill and suffered from persecution mania.

The assumption that the Isdal woman was a high-class prostitute has also been voiced. In some hotels she is said to have received male visitors. Perhaps the many false names were to protect herself and/or her customers.

In the book “The Isdal Woman, A New Perspective” by David Morgan, which I have read in the meantime, the author claims that there were in fact two women behind the Isdal woman. Thus, at the time in question, a U.S. American woman named Julie Valentine was traveling in Norway, who bore a distant resemblance to the unknown dead woman. It is possible that Julie Valentine was the woman described by the witnesses, while the Isdal dead woman had a completely different background.

At this point I would like to raise another hypothesis for discussion, which I have not heard anywhere before. According to this, the death of the Isdal woman could have been a staging. The British officer Major William Martin, whose body was discovered in Spain in 1943, could have served as a model. Martin had secret documents with him, which said that the Allies wanted to cross from North Africa to Sardinia.

In reality, Major Martin never existed. British intelligence had staged the whole thing to make the German enemy think that a landing was about to take place in Sardinia – in reality, it took place in Sicily. The body came from a civilian who had died shortly before in England. In 1996 Roger J. Morgan – a reader of this blog – was able to reveal the identity of the dead man, which had been kept secret until then.

Was the Isdal woman’s body a similar case? Had a lady deliberately acted in a conspicuous manner on behalf of an intelligence agency and intentionally left various clues. Had the secret service then placed the body of a bystander – half-burned so that the hoax would not be noticed – in the Isdal? Admittedly, this all sounds very speculative, especially since the question would be who was to be deceived here and for what purpose. But who knows?

When I first blogged about the Isdal woman six years ago, I found little information about this case on the Internet. This has since changed. On YouTube, for example, you can find a whole series of documentaries, podcasts and videocasts on the subject, also in German. I will discuss a few of them later. There is also a German Wikipedia entry in the meantime. Apparently, this unusual criminal case has gained significant popularity in recent years. 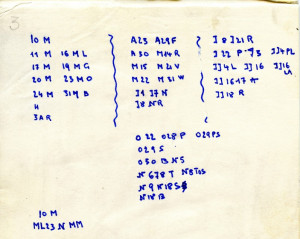 This cryptogram has now been mostly resolved, but there are still a few ambiguities. Blog reader Lawrence Alexander pointed this out to me, which prompted me to revisit this topic.

The cryptogram is the subject of the second part of this series of articles.