StartseiteCipherbrainUnsolved: A cipher text sent the day after D-Day 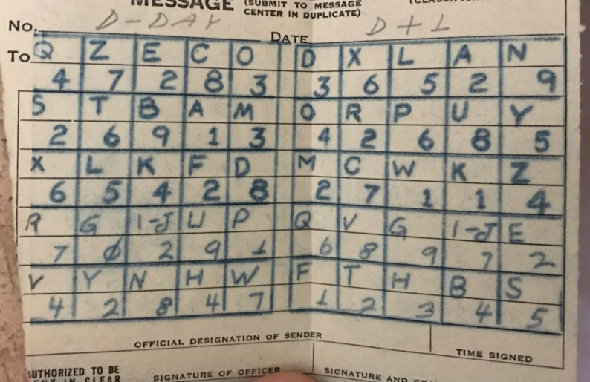 Unsolved: A cipher text sent the day after D-Day

Blog reader Patrick Hayes provided me with a coded message sent on June 7, 1944. Can a reader solve it?

I have already mentioned the ICCH forum several times on this blog. There, every two weeks on Saturdays at 6 p.m., there is a talk (held in English) on a topic of crypto history, which is broadcast via Webex. 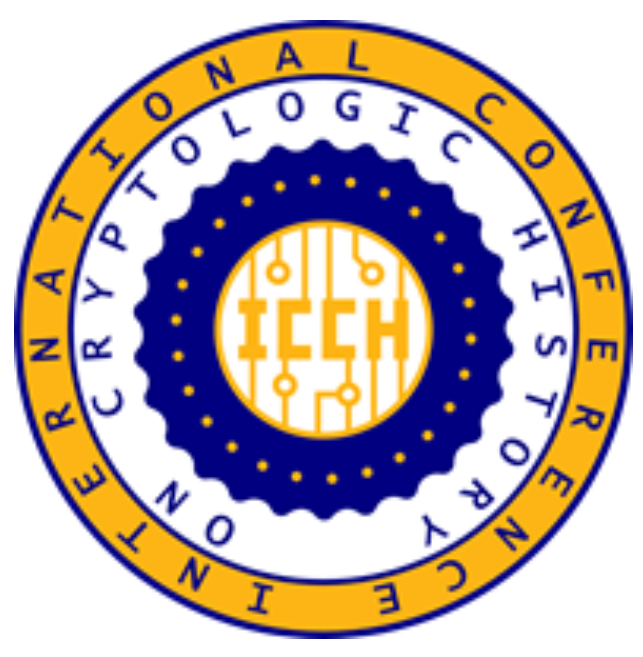 I’ve given several talks myself at the ICCH Forum, some of them with Elonka Dunin, the co-author of my recent book Codebreaking: A Practical Guide. In the next weeks there are the following talks:

So the next talk will be the day after tomorrow. I have my next appearance on March 20 together with Jerry McCarthy.

Soon there will be an ICCH website. Attendance links are not posted on the web yet for security reasons, but that should change. Everyone is welcome to attend the presentations, and participation is free. Anyone who wants to attend is welcome to send me an email.

Through the ICCH forum last year, I met Patrick Hayes … 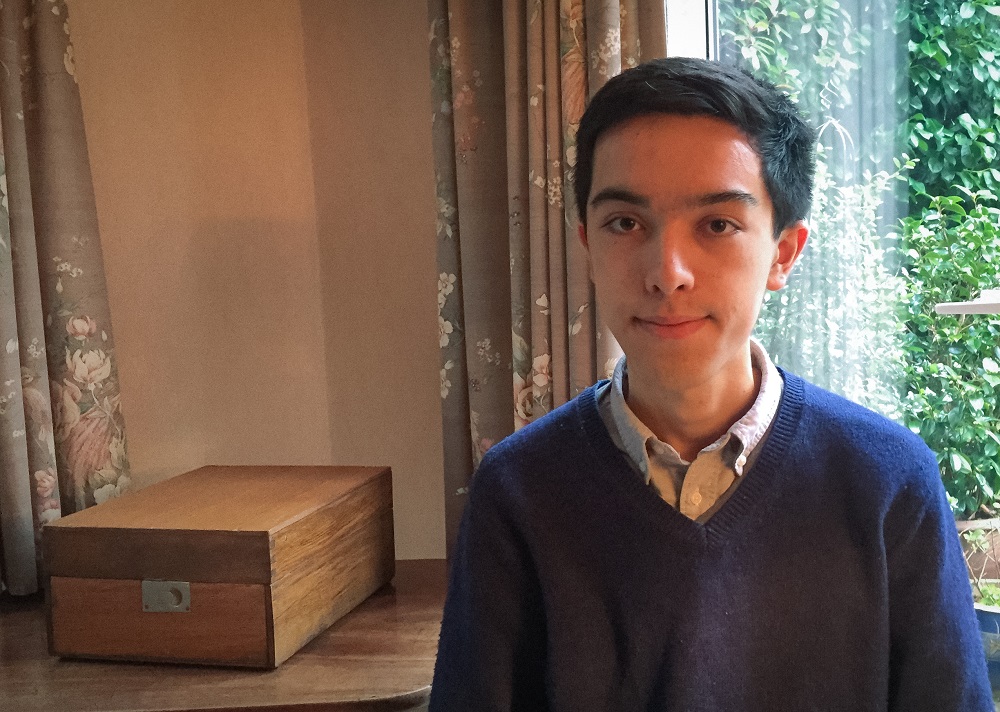 … got to know. Patrick, who runs an interesting website about encryption engines, told me the following about himself:

Patrick Hayes is a specialist and collector of cryptologic artefacts. He also brokers cryptologic artefacts linked to the Enigma, T-52 Geheimschreiber and other cipher machines to museums, dealers and collectors across Europe and North America. He is director of the Chiffriermaschine Museum, a virtual crypto history museum available at www.chiffriermaschine.com and is a member of the International Conference of Cryptologic History (ICCH). He is also currently studying History at Durham University, in the UK.

Patrick sent me a coded text from World War II a few days ago: 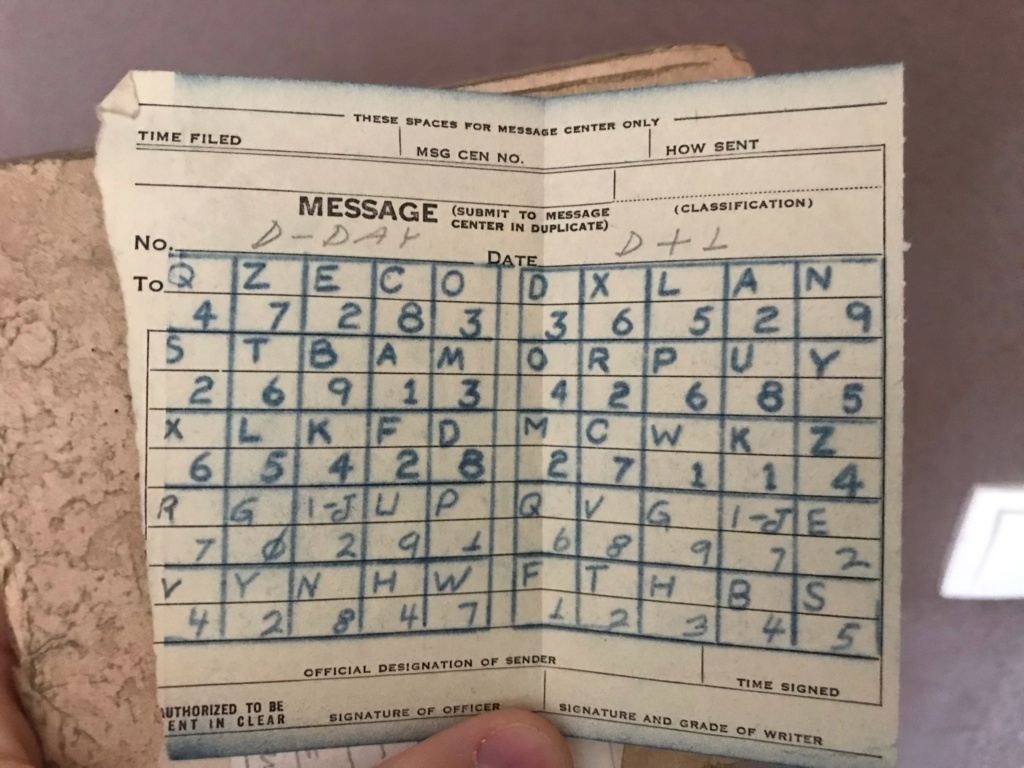 The inscription “D-Day” suggests that this message has something to do with June 6, 1944, D-Day. Readers of this blog may recall that there is already a well-known unsolved crypto mystery associated with that day: the carrier pigeon cryptogram.

Unfortunately, little is known about the background of this second D-Day message. Patrick wrote me the following about it:

The message paper is probably from a M-210-A message pad and is in five letter groups. Unusually, the words “D-Day” are written on the form and the writing on the message form is in cipher, rather than the usual transcribed clear. The date looks like “D+L”, but I think it may perhaps be “D+1” (D-Day + 1), a term used by the Allied forces for the day after D-Day. The rest of the form is not filled out. There are also numbers corresponding to each of the letters. There is also “I-J” used twice.

So the message was probably sent the day after D-Day (D-Day +1). The “Message Book M-210” mentioned by Patrick is described for example on the Cryptomuseum website by Paul Reuvers and Marc Simons:

This small message book was used for writing down encrypted or decrypted messages. It is small enough to be stowed inside one of the pockets of the canvas carrying bag. Carbon paper is used to create a duplicate when writing down a message. The duplicate page is thinner than the primary one, so that it can be fitted inside a pigeon capsule more easily. Note that the duplicate pages of the M-210A book are thinner that those of an M-210 book.

So it could be that the “D-Day+1” message was also transported by carrier pigeon. However, the “Message Book M-210” was used by the Americans, while the pigeon cryptogram, which has been known for a long time, was sent by the British.

The “D-Day +1” message can be read as a sequence of letter-number pairs:

This suggests that a table was used whose columns were marked with numbers and whose rows were marked with letters (or vice versa). It is remarkable that I and J apparently formed a unit. So there were 25 letters and 10 numbers (0-9) to choose from. Unfortunately, I don’t know of any encryption method that fits this. But maybe my readers know more.

Many thanks to Patrick Hayes for this exciting crypto puzzle! If anyone has anything to say about it, please let me know.