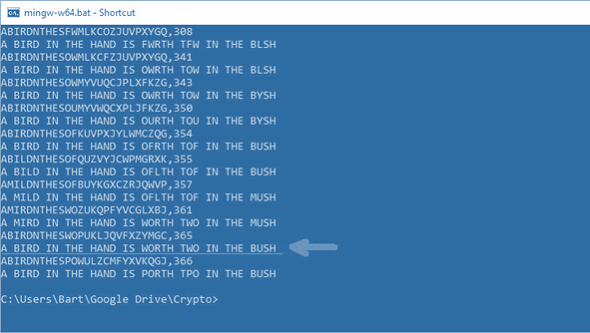 Blog reader Bart Wenmeckers has solved a 19th century cryptogram I recently introduced with Hill Climbing. A few diagrams he provided give me the chance to explain how this powerful technique works.

George Lasry, an Israeli of French decent, is one of the best codebreakers I know. He is especially good, when the cipher algorithm in question is known and the goal is to find the key.

Using Hill Climbing for decrypting a ciphertext works as follows (we assume that the cipher algorithm is known and that the goal is to find the key):

If we are lucky, the maximum rating we have found indicates that the last key is the correct one.

In contrast, Hill Climbing doesn’t work in modern cryptanalysis, as modern encryption algorithms, like AES, DES, and PRESENT, are designed to be so-called random oracles. This means that if only one bit is changed in the cleartext or the key the ciphertext changes completely. This is also referred to as “avalanche effect”. If an encryption algorithm implements the avalanche effect properly, Hill Climbing is completely worthless.

On March 16 I introduced a cryptogram from the 19th century created by British priest and novelist Sabine Baring-Gould (1834–1924) .

Blog reader Thomas solved this cryptogram within a few hours. He assumed that the cipher method used was a simple letter substitution, which can be broken with frequency analysis (i.e. taking into account that the E is the most frequent letter in English texts) and guessing words (as the first word of this cryptogram consists of only one letter, it is probably A or I). Here’s the solution: A BIRD IN THE HAND IS WORTH TWO IN THE BUSH.

Bart Wenmeckers from New Zealand solved the Baring cryptogram, too. He used Hill Climbing. At first view, this technique looks a little oversized for such a simple encryption method. However, while letter counting and word guessing are well-suited for manual codebreaking, writing a Hill Climbing computer program is probably easier than writing one that applies frequency analysis and guesses words. In addition, Bart’s program gives us the chance to see how Hill Climbing works in practice.

At first, Bart created a transcription of the cryptogram: 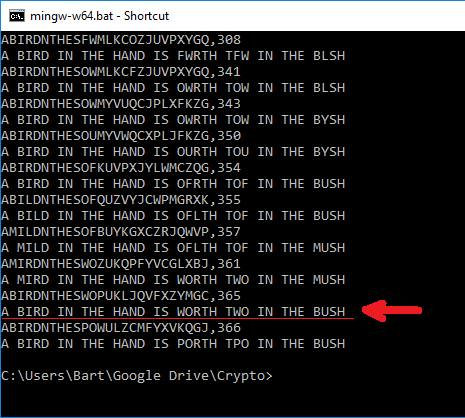 As you can see, the first key shown in the screenshot is the following:

This key resulted in the following cleartext: A BIRD IN THE HAND IS FWRTH TFW IN THE BLSH. This cleartext was rated 308 by the fitness function. After a few tries (the screenshot doesn’t tell how many) the solver found a better cleartext (rated 341) and thus a better key. With each improvement of the rating the cleartext gets closer to the correct one.

Here are the data of another run of Bart’s solver:

Again, the solver found the correct cleartext but didn’t realize it. The fitness function Bart used is based on the frequency of four-letter groups (quadgrams) in the English language. The key mutation is a random source destination swap of the key table.

I think Bart’s solver is a great tool for solving substitution ciphers automatically. In addition, it does a great job in visualizing how Hill Climbing works. Thank you very much to Bart for this great input.
Follow @KlausSchmeh