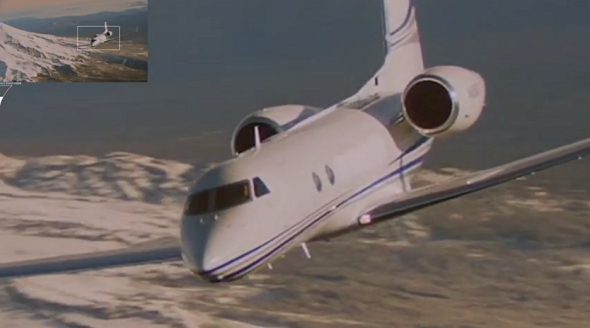 In a scene of the TV series Twin Peaks a flickering air plane window seems to hide some code. Can a reader solve it?

Hiding a code in a movie or TV series to create publicity is not necessarily a new idea. Here are a few examples (does a reader know more?):

Alex Vladi, a reader of this blog has now posted a comment about another TV code in the Facebook group Cryptograms & Classical Ciphers. In the newest Episode of Twin Peaks (season 3) there was a short scene showing an airplane in flight with the windows flickering with special patterns. Here’s the scene on YouTube (close-up and slow motion):

For more information check this article on a Twin Peaks blog. As pointed out in this article, there is a small black spot on the tail of the plane that is flickering, too. This might represent another hidden code or add to the first one.

If this Twin Peaks code really exists, it it an example of steganography. Many more codes of this kind are described in my new book Versteckte Botschaften (2nd edition), which is going to be published soon.

In the comment section of the article linked above a number of hypotheses about the Twin Peaks code are presented. Here are the most interesting ones:

If you have a clue on how to solve this code, please let me know.
Follow @KlausSchmeh

Further reading: Tengri 137: Who can solve this encrypted book?