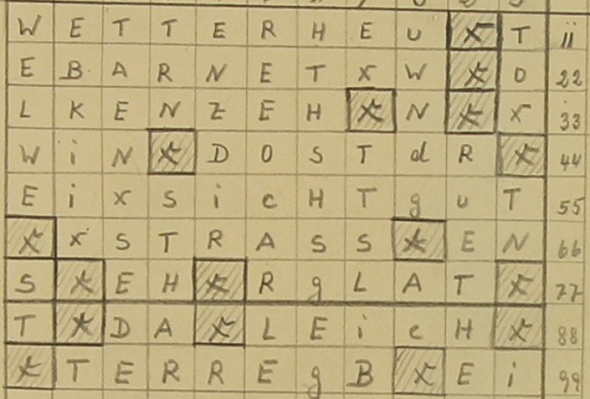 In WW2 German spy Wulf Schmidt used a simple encryption method based on a crossword puzzle.

Two years ago I blogged about an encryption method based on a crossword puzzle that was used by German spies in World War II. The source for this method is a document I found in the Friedman collection. It is not mentioned in the crypto history literature I am aware of.

I recently covered this crossword cipher in my talk about German spy ciphers of WW2 at the Euro HCC and in the paper I wrote subsequently. There is one interesting thing I learned during the research for my talk: all German spy encryption methods I found are only known from descriptions created by enemy specialists. So far, not a single WW2 spy cipher description of German origin has come to my attention.

In the National British Archives in London I have now found a second document describing the usage of the crossword cipher (or at least a very similar method). Again, it’s a document created by an enemy of the Germans.

It is not known which German intelligence organisation developed the crossword cipher and what the design criteria were. The cipher was introduced in 1936. It is a simple columnar transposition.

To use this cipher one needs a book containing several crossword puzzles and several text pages. An ordinary puzzle magazine taken from a newspaper stand will do. Both sender and receiver need a copy of this book. The sender takes a crossword puzzle (say, the one on page 4) from the book and writes his message (say, ENGLAND MUST CONCENTRATE AL FORCES TO WIN THE WAR) into the white boxes. Black boxes are filled with meaningless letters (nulls):

Now the sender chooses a text page (say, page 12) and notes the initials of the first 18 words. These letters are numbered according to their position in the alphabet:

This method was not very secure. A skilled cryptanalyst could certainly break it without knowing the crossword puzzle and the text used as key. Almost all other German WW2 spy ciphers I covered in my talk were not especially good, either.

The crossword encryption as applied by Schmidt

When I attended the National British Archives last week, I found a file about a German spy the British codenamed “Tate” (KV-2-62). According to Wikipedia, Tate’s clearname was Wulf Schmidt (1911-1992). Schmidt was a Danish citizen who became a double agent working for Britain against Nazi Germany. The fact that he was a double agent explains why the British secret service had a file with detailed information about his activities. 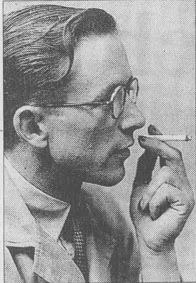 As it seems, Schmidt used the crossword encryption method. This can be seen on the following sheet (page 110 in the file): 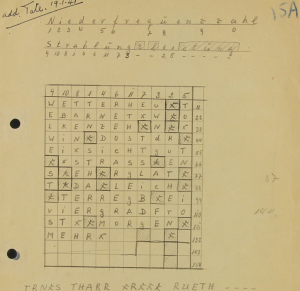 However, the key word is not taken from word initials found in a puzzle book. Instead, the word STRAHLUNGSLEISTUNG is used: