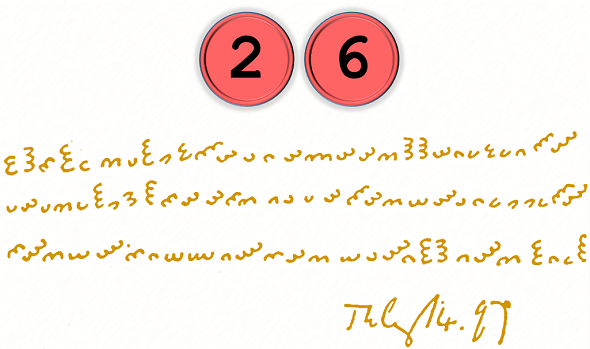 The Dorabella Cipher is one of the most popular crypto mysteries in the world. 120 years after its creation still nobody has found the solution.

Edward Elgar (1857-1934) was the most popular British composer of his time. His most famous piece is named Pomp and Circumstance March No. 1, also known as Land of Hope and Glory. Here’s a YouTube video of it:

Like many other musicians, Edward Elgar had an interest in cryptology. So, it comes as no surprise that he included a small cryptogram into a letter he wrote to his female friend Dora Penny on July 14, 1897. This cryptogram looked like this:

Considering that Dora Penny was an absolute laymen in terms of codebreaking, one could expect that these encrypted lines (today known as the “Dorabella cryptogram”) are easy to decipher. However, neither Penny herself nor anybody else ever found the solution of this challenge, though many have tried.

Due to the many successless deciphering efforts, the Dorabella cryptogram has become one of the most famous crypto mysteries in the world. It is contained in most unsolved ciphers lists, e.g. the one of Elonka Dunin and the one on Wikipedia.

In spite of its popularity, the Dorabella cryptogram is in my personal view not one of the top ten cipher challenges – there are more interesting ones. For this reason it is not mentioned in my book Nicht zu knacken, which covers the ten greatest unsolved crypto mysteries. However, I put the Dorabella cryptogram on position 26 of my top 50 list. It is also mentioned in my book Codeknacker gegen Codemacher. In addition, I created a Dorabella challenge for the crypto puzzle portal MysteryTwister C3 (it goes without saying that this challenge is still an unsolved one).

The best and most comprehensive treatise of the Dorabella cryptogram is available in Craig Bauer’s book Unsolved!.

Many tries, no solution

The Dorabella cryptogram consists of 87 characters spread over three lines. It appears to be made up from an alphabet of 24 symbols, each symbol consisting of one, two or three semicircles oriented in one of eight directions. A small dot appears after the fifth character on the third line. Here’s a transcription of the cryptogram:

Like other famous cryptograms (especially the Voynich Manuscript), the Dorabella cryptogram has been allegedly solved several times. For instance, musicologist and Shakespeare expert Eric Sams published the following interpretation in 1970 (the length of the cleartext is 109 letters, whereas the ciphertext contains only 87 or 88 characters; Sams claimed the surplus letters are implied by phonetic shorthand):

In my view this solution doesn’t make much sense. Several other solution descriptions have been handed in to the scientific magazine Cryptologia, but all were rejected.

Several authors suggested that the characters of the Dorabella cipher stand for musical notes instead of letters. However, this hypothesis hasn’t led to a solution so far, either.

If a reader has some new idea about this well-researched crypto mystery, please leave a comment.
Follow @KlausSchmeh