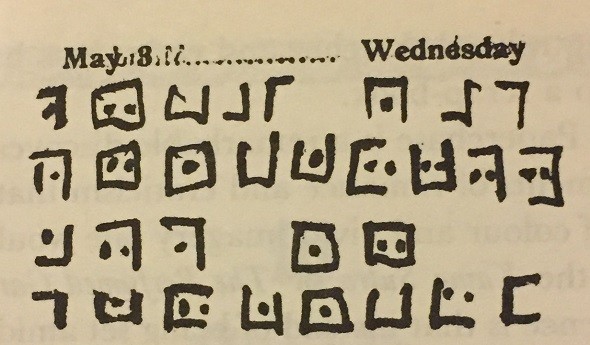 In a little known book I found a story about encrypted notes from 1905, including a diary. Can my readers support me with finding out more about these documents and decrypting two paragraphs?

Love in Code by Donald McCormick is a little known, but nice book about the use of encryption among lovers. Published in 1980, this work covers steganographic codes of Roman amorous couples, the encryption techniques of the Kama Sutra, the encrypted diary of statesman and womanizer Samuel Pepys, love messages from Victorian England, and similar stories. 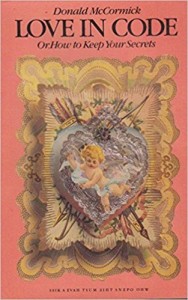 In chapter 10 of this book (“Cupid’s Paperchase”) we read:

According to Love in Code, these documents were found in 1974 by a grandson of the two lovers. Hugh and Cecily (the surnames are not mentioned) lived somewhere in southern England. The book chapter mentions the places Essex, Cornwall, London, the Scilly Isles and a few more, but McCormick apparently did not want to reveal the exact home place of the two. In addition, he quotes only short passages of the diary. My guess is that the grandson of Hugh and Cecily provided McCormick with the collection of documents under the condition that his grandparents stayed anonymous.

Hugh’s diary is number 00023 on my encrypted book list.

After having read the book chapter about Hugh and Cecily, I have a number of questions about this story. First of all, can a reader solve the following two entries from Hugh’s diary? 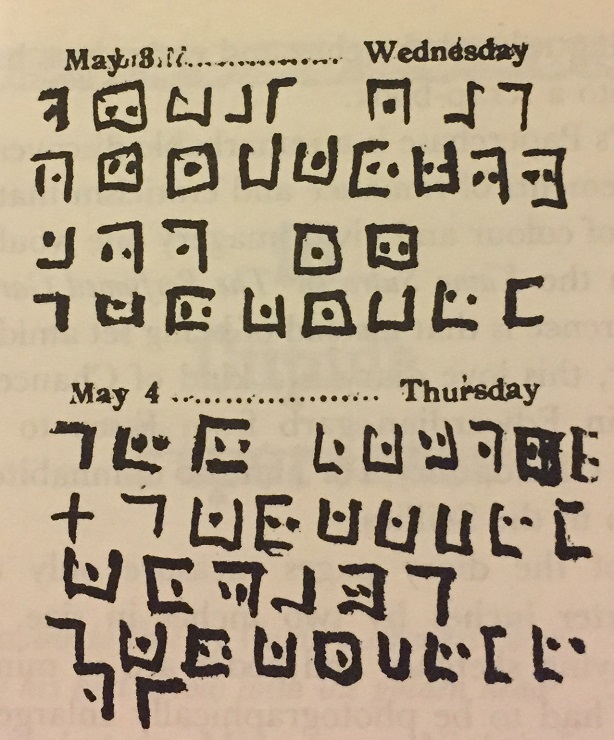 These two paragraphs are encrypted in a variant of the Pigpen Cipher. It should be not too difficult to break the code.

Here’s a drawing Hugh left behind: 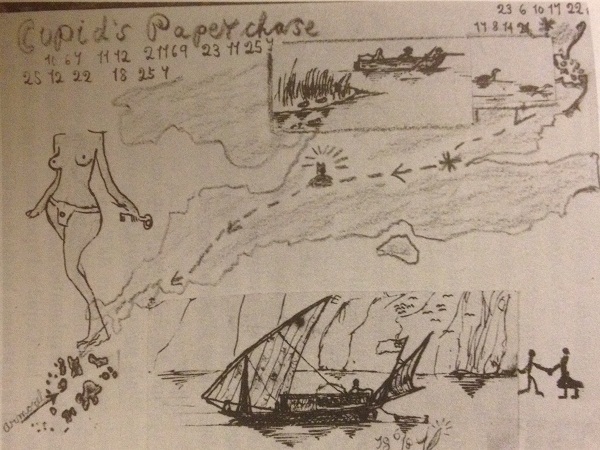 In addition, I wonder if we can find out more about Hugh and Cecily. Especially, more information about the encrypted notes would be very interesting. McCormick’s book, which doesn’t give much background information, was published in 1980. Has this story been mentioned elsewhere in the meantime? Did a local newspaper report on it? If you know more please let me know.

Donald McCormick himself won’t be of any help any more. He died in 1998. In his Wikipedia entry it says: “McCormick’s reliance on an informal network of oral informants, and his eye for a good story, means that it is often difficult to judge the reliability of his more controversial claims.”
Follow @KlausSchmeh