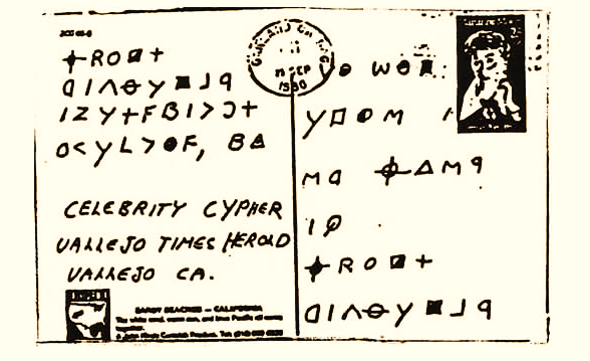 20 years after the last message of the infamous Zodiac Killer an unknown person sent a Zodiac-style postcard to a California newspaper. As far as I know, it has never been deciphered.

The “Sleep My Little Dead” message

The following Zodiac copycat message was written in 1994 (about 25 years after the murders): 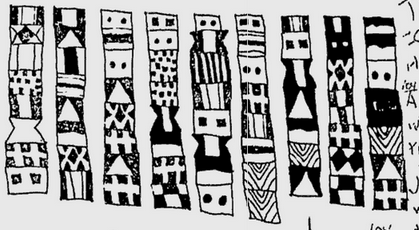 This message is a part of a letter that includes the words “Sleep my little dead how we loathe them”.

It is introduced on a web site last updated in 2013. As far as I know, the “Sleep My Little Dead” message is solved. However, I don’t know the solution and I can’t find it online. Can a reader help?

Let’s now proceed to one of the unsolved Zodiac copycat messages. On September 25, 1990 an unknown person sent the following postcard to the Vallejo Times Herold, a regional newspaper of the San Francisco Bay area: 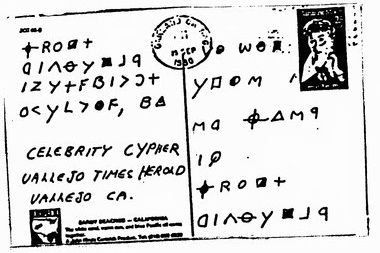 The three lines of cleartext contain the name and the location of the newspaper, as well as the expression CELEBRITY CYPHER. A “celebrity cypher” (today usually spelled “celebrity cipher”) usually refers to a crypto puzzle based on an encrypted quote by a famous person. Celebrity ciphers are quite popular among the members of the American Cryptogram Association (ACA) and other puzzle enthusiasts. There are books and web pages about celebrity ciphers.

The woman on the stamp is poet (and celebrity) Marianne Moore – I have no idea if this is of any concern.

The alphabet of the Celebrity Cypher cryptogram looks pretty much the same as the one the real Zodiac Killer used. Here is, for comparison, the second original Zodiac message (Z340):

Of course, codebreakers have checked whether the letters used in the Celebrity Cypher message have the same meaning as in the first Zodiac cryptogram (this one is solved), but to no avail.

There are quite a few web pages around providing information about the Zodiac Celebrity Cypher. Some of them describe alleged solutions. However, as far I have seen so far, most of them are of this kind: 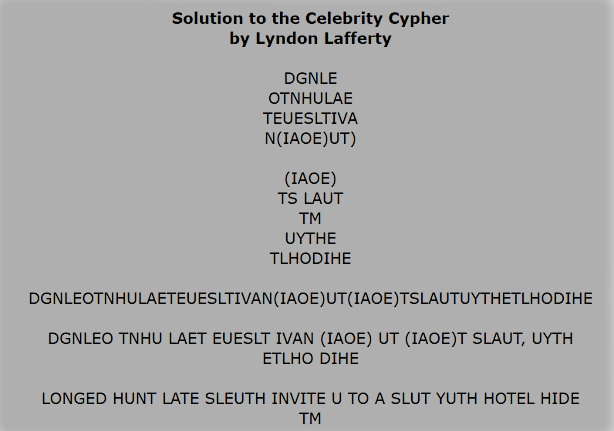 This solutions, as well as a few others, I have checked don’t look very promising to me.

Can a reader solve the Zodiac Celebrity Cypher?
Follow @KlausSchmeh