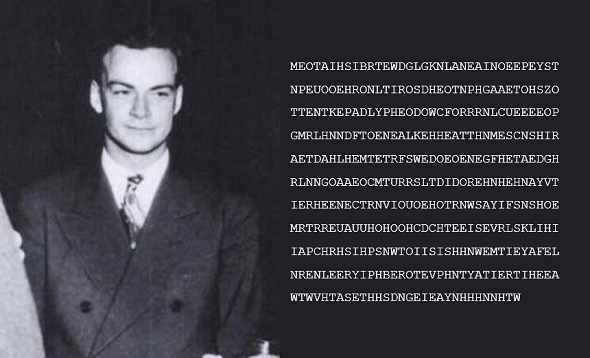 Three encrypted texts left behind by Nobel Prize winner Richard Feynman are probably the most famous crypto mystery I have never blogged about before. Today, this is going to change.

In 1987 a certain Chris Cole posted the following note in the usenet group sci.crypt:

When I was a graduate student at Caltech, Professor Feynman showed me three
samples of code that he had been challenged with by a fellow scientist at
Los Alamos and which he had not been able to crack. I also was unable to
crack them. I now post them for the net to give it a try.

The professor Feynman mentioned in this post was none other than American theoretical physicist Richard Feynman (1918-1988), who received the Nobel Prize in Physics in 1965. 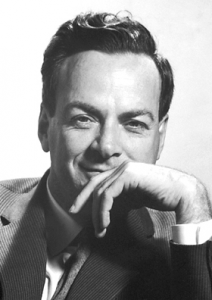 Feynman was a member of the team that built the first atomic bomb in Los Alamos (Manhattan Project) during the second World War. He had no special interest in cryptology, but apparently the time in Los Alamos, in the middle of the desert of New Mexico, was quite boring, so he occupied himself with the crypto puzzles his fellow scientist gave him. He couldn’t solve them.

The solution of the first Feynman cryptogram was found soon after it had been posted in the sci.crypt newsgroup. Here’s the ciphertext:

All we need to do is write the ciphertext in different line lengths and check whether something can be read (line-wise or column-wise, forward or backward). As we deal with 380 letters, line lengths 4, 5, 10 and 19 are good candidates (these are the divisors of 380). We’ll skip the four-letter attempt (it doesn’t lead to the solution) and start with five-letter blocks:

If we read the first column bottom-up we get: NYGHTWITHOPENYES… This looks like English plaintext with misspelled words (“Nyght with open [e]yes …”). The other four columns make sense, too, when read backwards. Read the whole message from lower right upward we get:

This is an excerpt from Geoffrey Chaucer’s Canterbury Tales, a famous story collection written in the 14th century.

The second and the third Feynman cryptogram have never been solved. Here’s cryptogram #2:

And here’s the third cryptogram:

As far as I know, there are not very many analyses of the two unsolved Feynman ciphers. Nick Pelling has posted a few articles about them.

If you are aware of other sources about this crypto mystery or if you know how these cryptograms might be solved please let me know.
Follow @KlausSchmeh