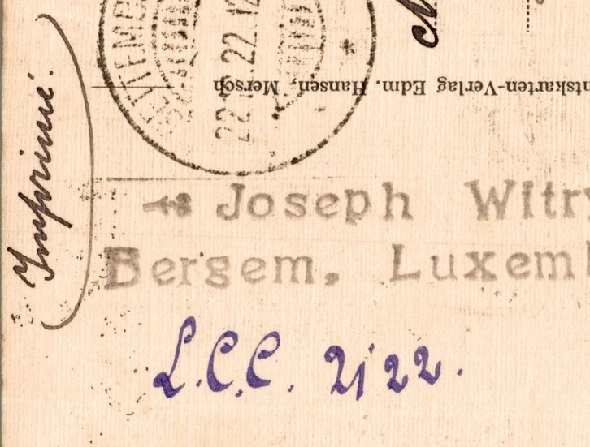 In 1922, a man from Luxemburg sent a postcard to a recipient living in the famous brandy town of Cognac, France. The message on the postcard consists of only seven letters. Can a reader find out what it means?

When I write a blog post about an encrypted postcard, this usually means that I have to take a geography lesson. However, when André Feller from Luxemburg recently provided me the following encrypted card, things were easy. 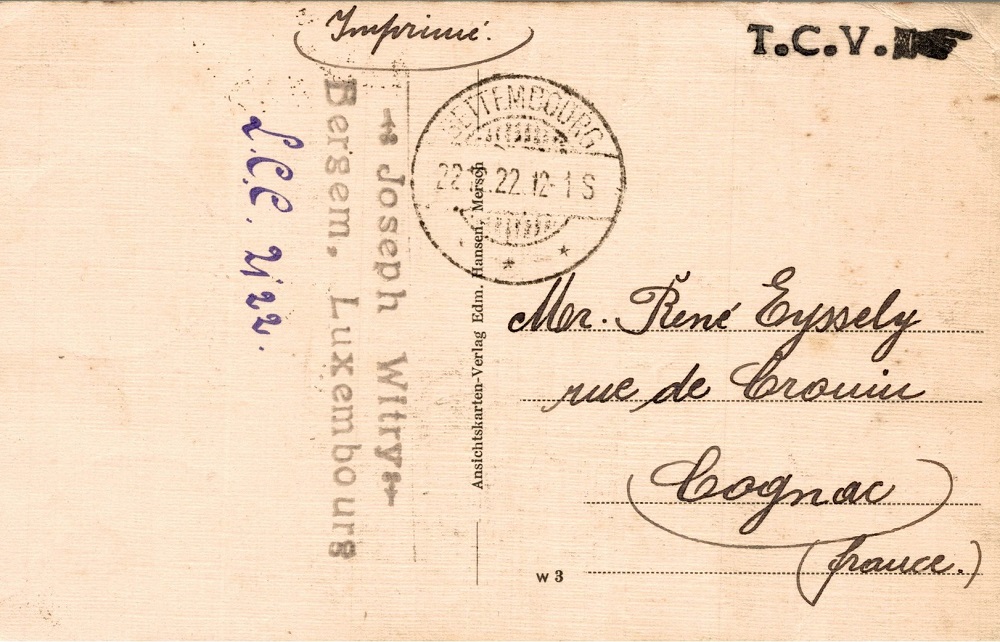 As can be seen, the sender of the card was a Joseph Witry from Bergem, Luxemburg.

The recipient of the card was a certain René Eyssely, living in Cognac, France. Even if you are not a geography expert, you certainly know that Cognac, a town with 20,000 inhabitants in Western France, is the home of the world-famous brandy of the same name. Wikipedia writes:

The town gives its name to one of the world’s best-known types of brandy or eau de vie. Drinks must be made in certain areas around the town of Cognac and must be made according to strictly-defined regulations to be granted the name Cognac. Cognac is a unique spirit in that it is double-distilled. This process can be viewed in one of the many “Grande Marque” Cognac houses which all have visitor centres. Most central in the town are Hennessy, Martell, Otard, Camus and Remy Martin. About 15 km (9.32 mi) East of Cognac is Jarnac, home to Courvoisier.

In addition to being kind of the world’s brandy capital, Cognac is also notable for its wine production. There are six vineyard areas around the town.

While the geographical part of the postcard shown above is easy, the cryptologic part appears to be quite tricky. Here’s the message on the card:

This cryptogram consists of only seven characters. In my view, it represents an expression taken from a codebook. It probably encodes some kind of business message (the fact that the sender used a stamp for writing his address indicates that he was a business man). Most likely, it is an order.

As the recipient lived in a town, the economy of which is dominated by wine and brandy production, my guess is that this postcard is an order for wine or brandy. “L.C.C.” might stand for the type of wine/brandy ordered, while 2122 encodes the amount.

It is as good as impossible to solve a cryptogram of this kind without knowing the codebook. Can a reader find out, which codebook was used? Perhaps, it was a standard codebook used in the wine business. On the other hand, the code used might have been arranged by the sender and the recipient, which would make it quite difficult to decipher this message.