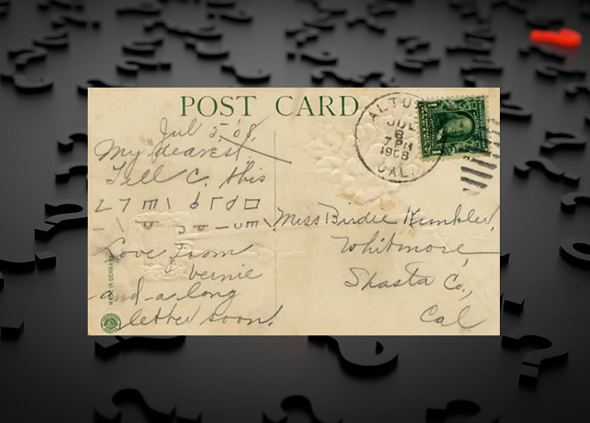 Here’s another crypto postcard. As the encrypted part of the message has only 17 letters, it is probably hard to decipher.

As a reader of Klausis Krypto Kolumne you certainly know that this blog is the number one contact point for unsolved crypto mysteries. But what can you do if a mystery you encounter is not cryptographic but linguistic in nature? As far as I know, the puzzles section of the website Omniglot is the best place to ask questions about unknown writing systems, strange texts and exotic languages. Omniglot, an online encyclopedia of writing systems and languages, is operated by Simon Ager, a well-known linguist. The amount of information available on this site is absolutely overwhelming.

To get an impression on how the Omniglot puzzles section (which makes only a small part of the site) looks like, take a look at the following screenshot: 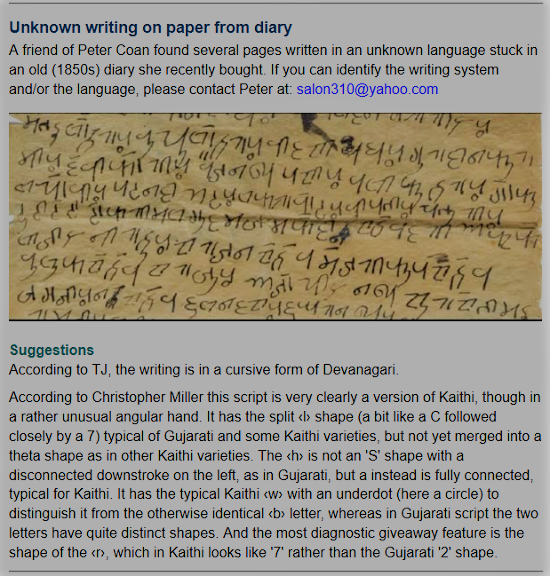 Another entry I found would fit better to this blog than to the Omniglot puzzle section. It is about an encrypted postcard: 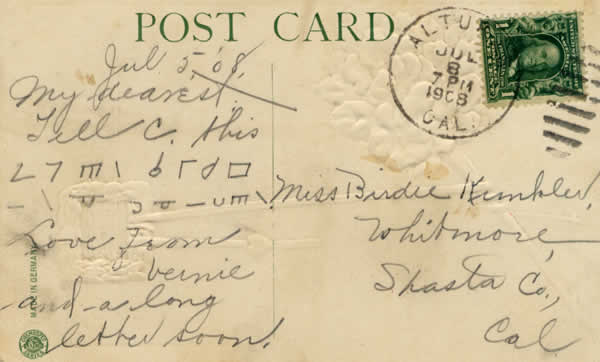 Like many other encrypted postcards, this one is written from a (young?) man to an unmarried woman (probably his spouse). The recipient is a certain Birdie Kimbler, living in Whitmore, California. The name of the sender is Vanie (?). The card was stamped in Altura, California, on July 8, 1908. The distance between the two California towns is about 140 kilometers.

The encrypted part of the message is only 17 letters long. According to a reader comment on the Omniglot page, most, if not all, of the symbols on the postcard appear to be hobo symbols. However, I don’t think this is true. To me this looks like a simple substitution cipher (MASC), which is by far the most common encryption method encountered on postcards.

My readers have shown many times that MASC-encrypted postcards are usually easy to solve for a good codebreaker. However, this one might be different, as the text is very short. Frequency analysis probably won’t help. Perhaps, a cleartext word can be guessed (as far as I can tell, the encrypted message consists of four words). If you can find out more, please leave a comment.
Follow @KlausSchmeh

Further reading: Who can decipher this encrypted postcard from the 19th century?