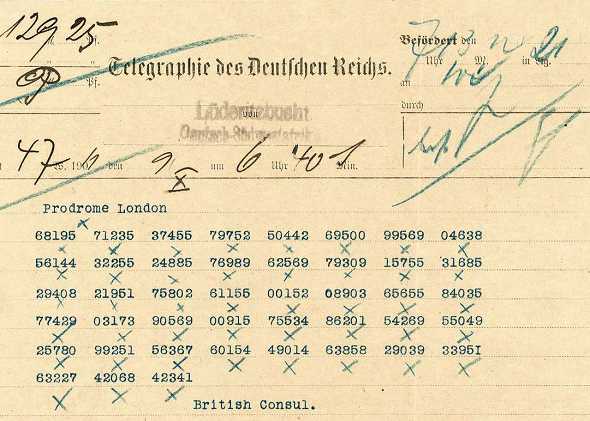 In 1911, the British consul in Lüderitz, German South West Africa, sent an encrypted telegram to the foreign ministry in London. Can a reader break this encryption?

Did you know that Germany once was the fourth largest colonial power in the world? Especially in Africa, the Germans owned a considerable amount of land. Of course, this is nothing to be proud of, as the Germans, like all colonial powers, exploited their possessions and regarded the natives as inferior people.

In 1919, after the First World War had been lost, the Germans had to surrender all their colonies. This later proved to be an advantage, as other colonial powers faced trouble, when their colonies struggled for independence, often resulting in a war. The early end of the German colonial dreams led, by the way, to the fact that the German language did not spread over the globe. For this reason, the use of German is limited to central Europe today, while English, French, Spanish and Portuguese are spoken in countries all over the world.

One of the most important German colonies was German South West Africa, today named Namibia. As it seems, in the German South West African city of Lüderitz, there was a British consulate. On October 9th, 1911, the British consul in Lüderitz sent an encrypted telegram to the foreign ministry in London. Here it is (Prodrome is the telegram address of the foreign ministry): 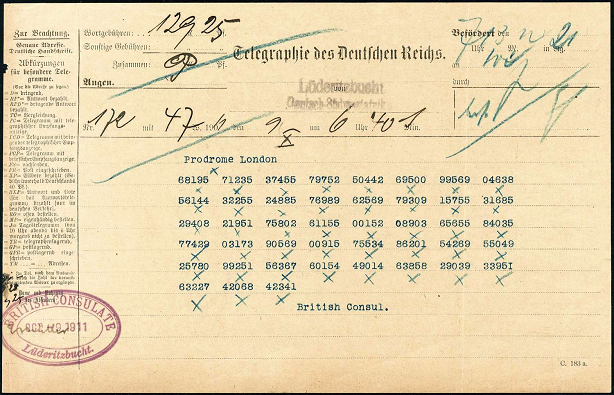 This telegram scan was provided to me by Frank Gnegel from the Museum für Kommunikation in Frankfurt, Germany. Here’s a closer view on the actual message:

The sender probably used a codebook for encryption. A codebook lists a so-called codegroup (in this case a five-digit number) for every common word of a language. In the following example the codegroups are five-letter groups:

In order to be able to solve the Lüderitz telegram, one probably needs to find the codebook that was used. However, this may not be enough, because sometimes codebook-encrypted messages were super-encrypted, i.e., a second encryption step was performed after the codebook encoding. For example, a number derived from the current date could be added to each codegroup. In general, diplomats used well-designed codebooks and super-encryption methods, which may make breaking the Lüderitz telegram quite difficult.

Three years ago, I published a blog post about the Lüderitz cryptogram (in German). There were many comments, but nobody provided the solution. Meanwhile, my readership has grown and is more international, so I decided to introduce this mystery again. Can a reader find the codebook that was used or some other approach to solve this encryped telegram? If so, please leave a comment.
Follow @KlausSchmeh

Further reading: Alexander Hamilton: Protagonist of a musical and user of a turning grille