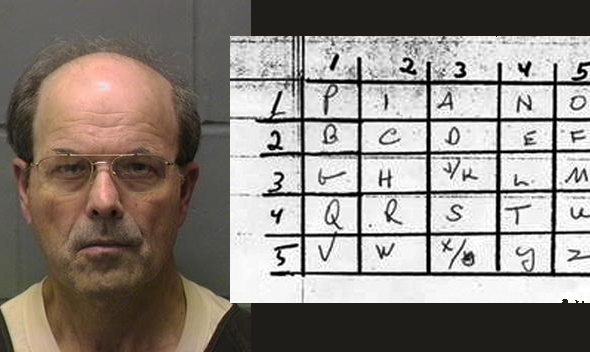 In 1978, a Kansas TV station placed a subliminal message in a TV program in order to catch a serial killer. 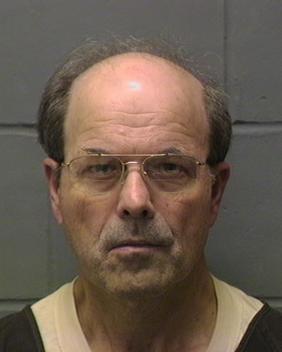 An encrypted message from the killer

Until recently, the BTK killer was known to me mainly for two reasons. First, he sent an encrypted message to a local newpaper (like the Zodiac Killer did). Here’s a scan of the original (apparently, Rader used a stamp to write down the message in order to avoid his hand-writing being examined):

And here’s a transcription: GBSOAP7-TNLTRDEITBSFAV14

As far as I know, there are only three sources that explain this cryptogram: a Cryptologia article (paywalled) by Jeanne Anderson, a blog post of mine (German), and a Spiegel Online article (German) based on my blog post.

The FBI crypto unit CRRU could only solve this message after Rader’s arrest and with his help. It turned out that Rader had used the following table: 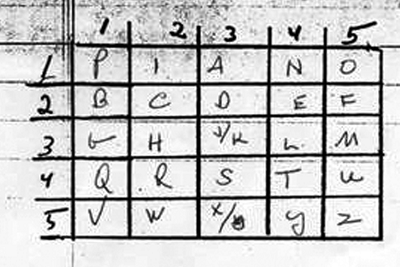 The plaintext of the message Rader sent to the newspaper is: PJ PIANO LET BEATTIE KNOW. Rader encrypted the two parts of the message (before and after the hyphen) separately and made a few mistakes. This makes decryption quite confusing.

PJ PIANO (“Project Piano”) is a name Rader gave to one of his murders. LET BEATTIE KNOW refers to a policeman nicknamed “Beattie”. As it seems, the main purpose of this message was to confuse police investigators, while its content was irrelevant.

This message was by far not the only one the BTK killer sent to police, but all others were not encrypted.

How the killer was caught

The second reason why I knew about the BTK Killer is not really crypto-related, but it has to do with IT security. After having committed ten murders within 17 years and after police having spent millions of dollars to catch him without success, Dennis Rader finally made a ridiculous mistake.

Apparently, Rader thought that sending a message to police on a floppy disk instead of using a piece of paper would make things a little easier. So, on February 16, 2005, Rader mailed a purple 1.44-Megabyte floppy disk containing a text file to the KSAS TV station in Wichita.

When police examined the disk, they discovered a deleted Word file, which could easily be restored. The metadata of this file contained the words “Christ Lutheran Church”, and the document was marked as last modified by “Dennis.” An internet search determined that a “Dennis Rader” was the council president of the Wichita Christ Lutheran Church. A week later, Rader was arrested.

A subliminal message to the killer

Via a Google search, I recently learned that there is a third reason why the BTK killer case is interesting from the point of view of somebody interested in crypto and IT security. 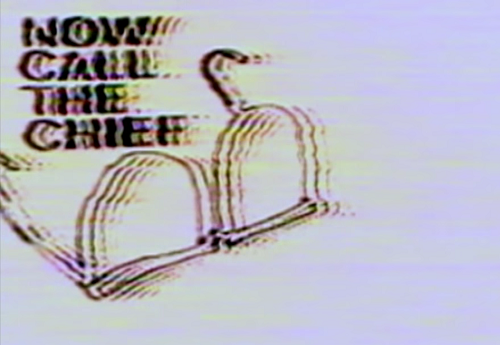 A short video of this experiment can be found on YouTube. This attempt to catch the killer was probably influenced by James Vicary’s popcorn experiment, which allegedly proved that people could be manipulated with short messages hidden in films. Later, it became known that this experiment had been a fake and that the method didn’t work. It therefore comes as no surprise that the attempt to catch the BTK Killer with a subliminal message was unsuccessful.
Follow @KlausSchmeh