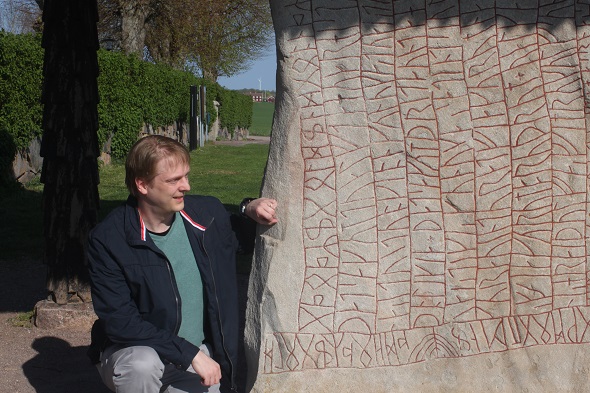 Blog reader Magnus Ekhall has taken a trip to the Rök runestone, a famous cryptologic sight in Sweden. Here are his report and a few photographs he took.

The Rök runestone, a famous stone located in Rök, Sweden, bears one of the oldest encrypted inscriptions known.

According to Wikipedia, the Rök runestone was discovered built into the wall of a church in the 19th century and removed from the church wall a few decades later (it was common to use rune stones as building material for churches). The stone was probably carved in the early 9th century. 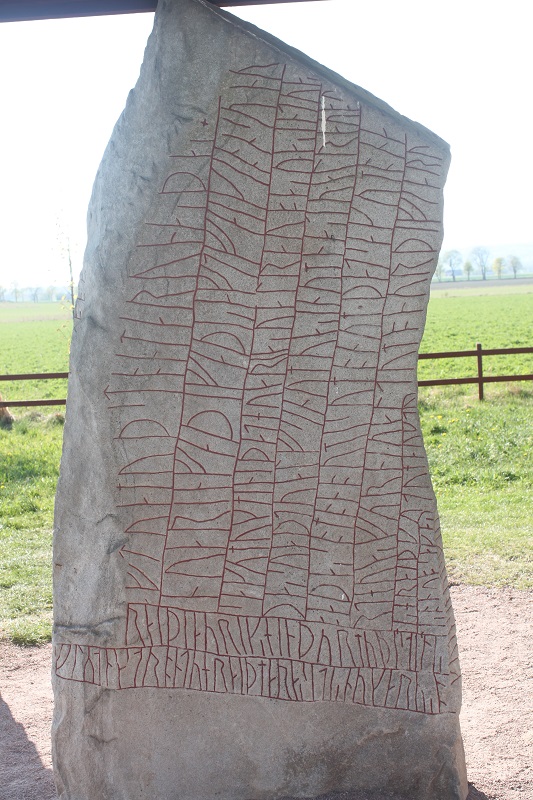 The Rök runestone is mentioned on the Cryptologic Travelguide site made by Christian Baumann and me. Recently, Magnus Ekhall … 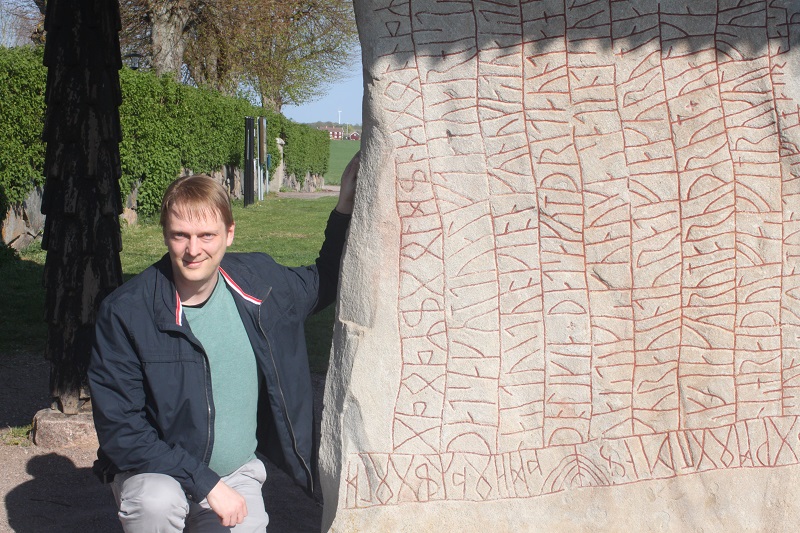 … , a reader of this blog, made a trip to the Rök runestone. He provided me a couple of photographs and some additional information. 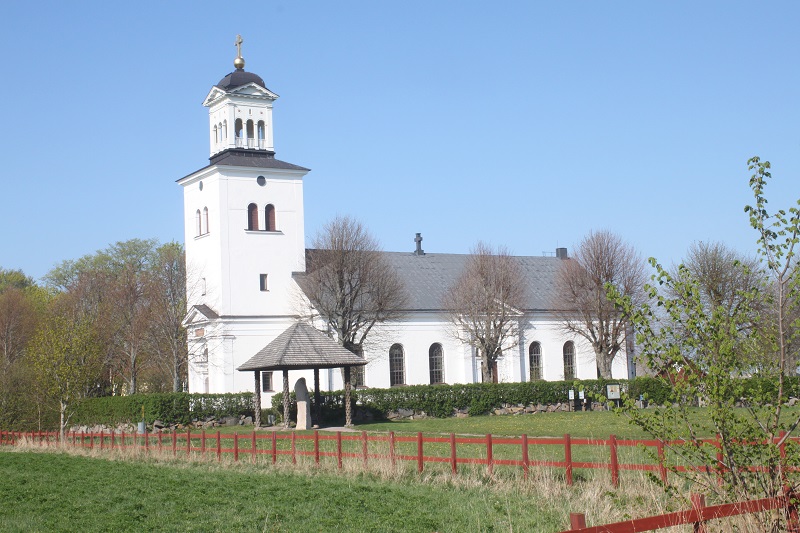 Magnus wrote: “I took his trip on a beautiful spring day with sun shining from a blue sky with a nice 18 degrees. The trees were in the process of budding out which was a long awaited sign of warmer seasons coming. The stone is located between the town of Ödeshög and the village of Väderstad, just next to the old route of the E4 motorway.” 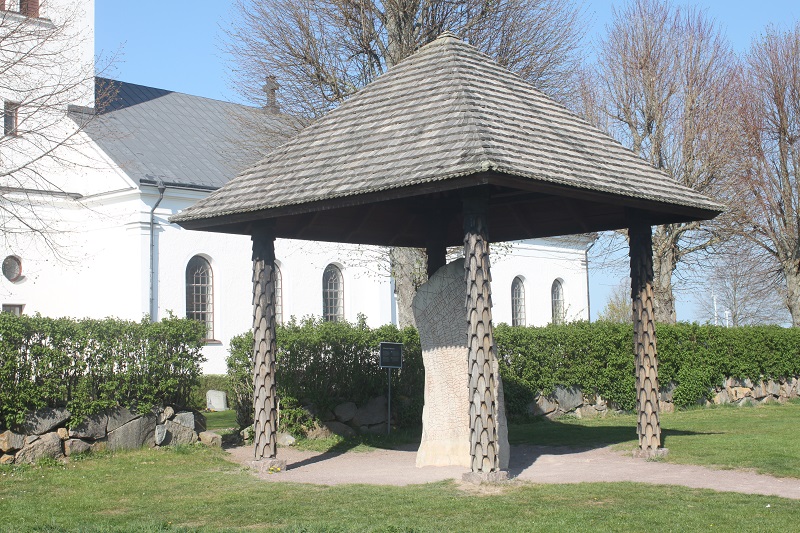 The stone itself is currently placed just in front of the church in Rök, which in turn is on the fertile plains of Östergötland. According to Magnus, there are a parking lot and a small visitors center located some 50 meters from the stone. The Rök stone is 382 cm tall (of which 125 cm are in the ground), 138 cm wide and is protected from the elements by a simple wooden roof. The Rök stone represents the world’s longest runic inscription in stone. 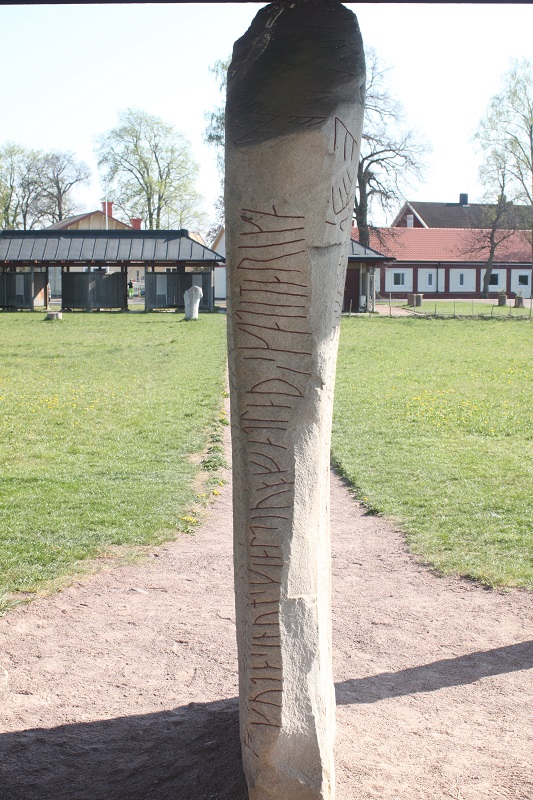 The encryption method used by the creators is explained on a poster hanging next to the stone. Magnus provided the following translation:

On rows 23 and 24, a shift cipher [a Caesar cipher] is used. It is written with runes from the short-twig futhark. Every rune is replaced with the next letter in the runic alphabet. On the Rök stone it says: ‘AIRFBFRBNHN’. With one rune displacement it becomes ‘SAKUM UKMINI’, meaning ‘I tell the youth’.

The next encrypted part is in row 26. The ‘twigs’ on the top tell which class [Swedish: ätt] the rune belongs to and the lower ‘twigs’ denotes which rune within that class. This is how the cipher is decrypted:

At the bottom of row 26, there are a few additionals encrypted signs. The chosen sign is first used in its normal orientation, then mirrored. The symbols spell the name of a god: þur [Thor]:

[‘b’ is used as the sign in its normal orientation and ‘d’ as the mirrored one. The real sign differs, see the photo]

A crossed rune is located on the top of the stone. The easiest way to solve the cipher is to divide the rune in three parts. Then the name Sibi (Sibbe) appears.