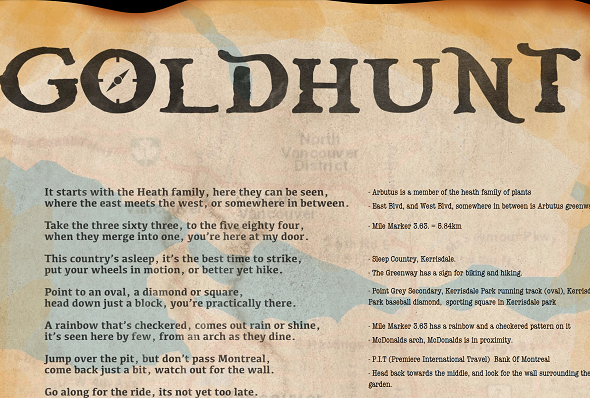 A Canadian company hides treasures that can be found by solving puzzles. The first round of the hunt is over, a second one has been announced.

One of the most famous unsolved crypto mysteries in the world is based on three encrypted texts allegedly left behind by some Thomas Beale in the 19th century. These messages, known as the Beale cryptograms, are said to describe the hiding place of a treasure worth tens of millions of dollars.

In case you believe that the Beale cryptograms are a hoax (I certainly do), you still can try your luck with a few other ciphertexts that allegedly lead to a hidden treasure – for instance the La Buse message, the Peralta stone inscriptions or the Oak Island cipher stone. Unfortunately, the probability that one of these encrypted messages will really make you rich are as good as zero.

If you prefer to search for a treasure that is likely to really exist, try to make sense of a poem written by US art dealer and millionaire Forrest Fenn. If you guess the meaning of this poem correctly, you might find the Fenn treasure.

Blog reader John Lamping has recently made me aware of another treasure hunt that requires solving puzzles. So far, three treasures of this kind have been hidden. All hiding places are located in Canada (namely in Vancouver, Calgary and Edmonton).

The treasure hunts in question are organized by a Canadian start-up company named Gold Hunt. Their plan is to earn money with these projects, which means that they expect a return on their investments. This contrasts with the Fenn treasure, which was hidden by its creator for fun.

To find one of the Gold Hunt treasures, one can download a map that includes a poem containing a series of riddles and cryptic messages. This map includes everything one needs to find the treasure, but the additional clues provide hints that help to solve the mystery faster. Clues have to be paid for, and this is how Gold Hunt wants to make their money.

The following video provides some information about the Gold Hunt treasures:

A look at the Vancouver hunt

As mentioned, the three treasures of the first round have all been found. Meanwhile, Gold Hunt has published all riddles, clues and keys of the three hunts (in Vancouver, Calgary and Edmonton). Let’s take a look at the Edmonton map (it has been officially un-licensed, so I can reproduce it here): 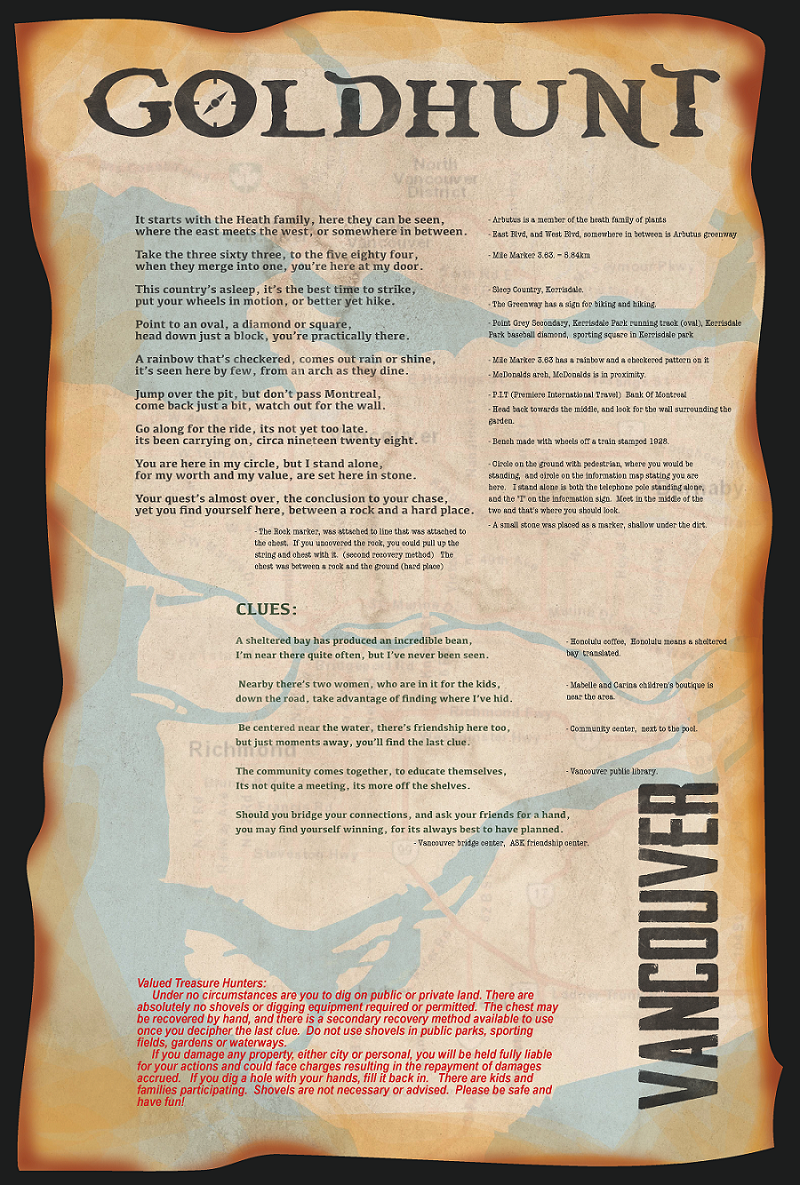 As can be seen, all the hints and the solutions have been added to the map. This gives us the chance to see how the whole thing worked. For instance, the first two lines of the poem read as follows:

It starts with the Heath family, here they can be seen,
where the east meets the west, or somewhere in between

These words refer to the Arbustus Greenway, a street in Vancouver. Arbustus is a tree that belongs to the heath family of plants. Would you have guessed this?

And here’s one of the clues the participants had to pay for:

A sheltered bay has produced an incredible bean
I’m near there quite often, but I have never seen

As far as I can see, no encryption in the narrow sense was involved in this game.

The video and the website don’t say how many people took part in the first three treasure searches and how much revenue was generated. However, it is clear that Gold Hunt needs to take at least 100,000 Euros per hunt in order to refinance a treasure worth 66,000 Euros and the work invested. In my view, it is quite difficult to make so much money just by selling clues.

Nevertheless, I wish Gold Hunt good luck with this new concept. Perhaps, treasure hunts of this kind will one day be as popular as escape rooms.
Follow @KlausSchmeh