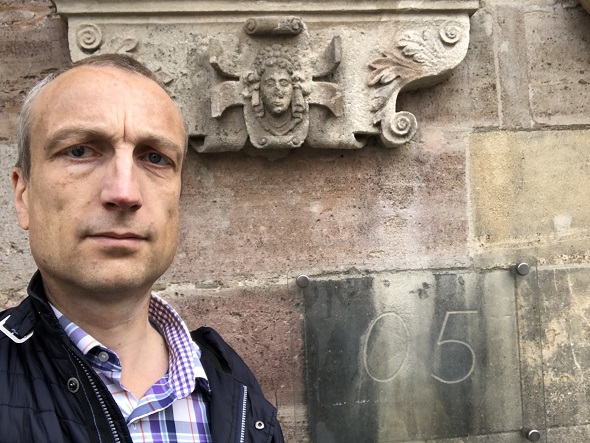 During a stay in the Austrian capital of Vienna, I tried to take a look at the encrypted inscription on the cenotaph of Duke Rudolf IV. I was only partially successful.

On Thursday this week, I gave a presentation at the Digitall Day, a symposium hosted by smart card expert Max Paul in Mödling, Austria. 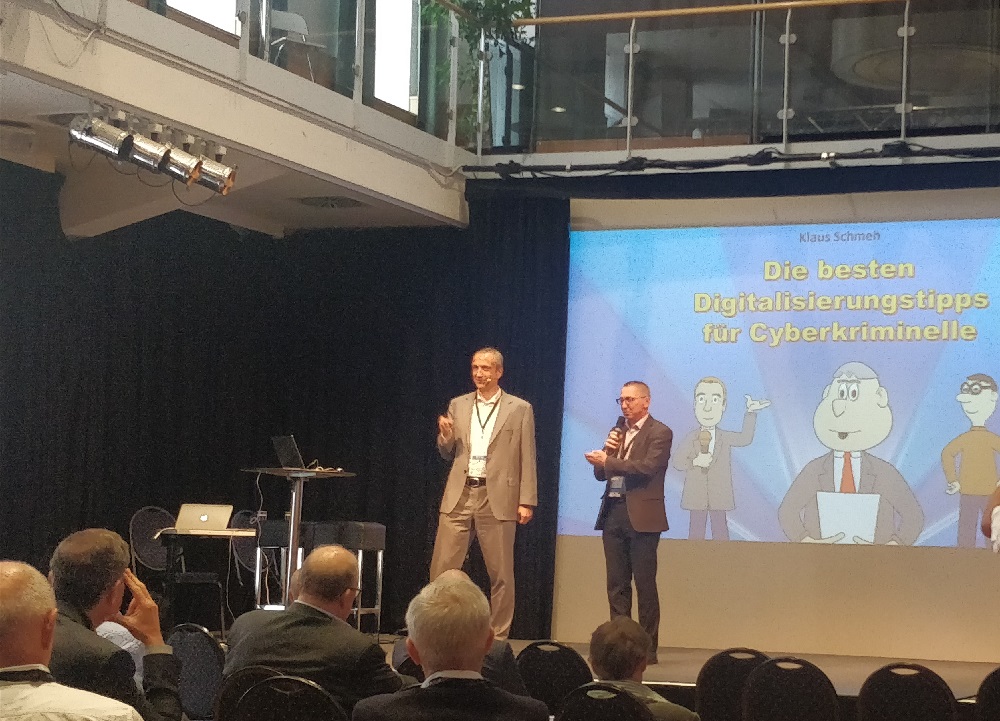 The Digitall Day was a great event with many interesting talks about the challenges of digitalization. My next lecture will take place at the it-sa in Nuremberg, Germany, on October 10th.

On the day after the symposium, I took a trip to nearby Vienna in order to meet a few blog readers. Gerry, John Haas and Christian Baumann have contributed many interesting comments on Klausis Krypto Kolumne. I had never met them before and I really enjoyed getting to know them.

In addition, I planned to visit two cryptologic sights listed in my Cryptologic Travel Guide (programmed by Christian Baumann), both of which are located in St. Stephen’s Cathedral, one of Austria’s most famous buildings. 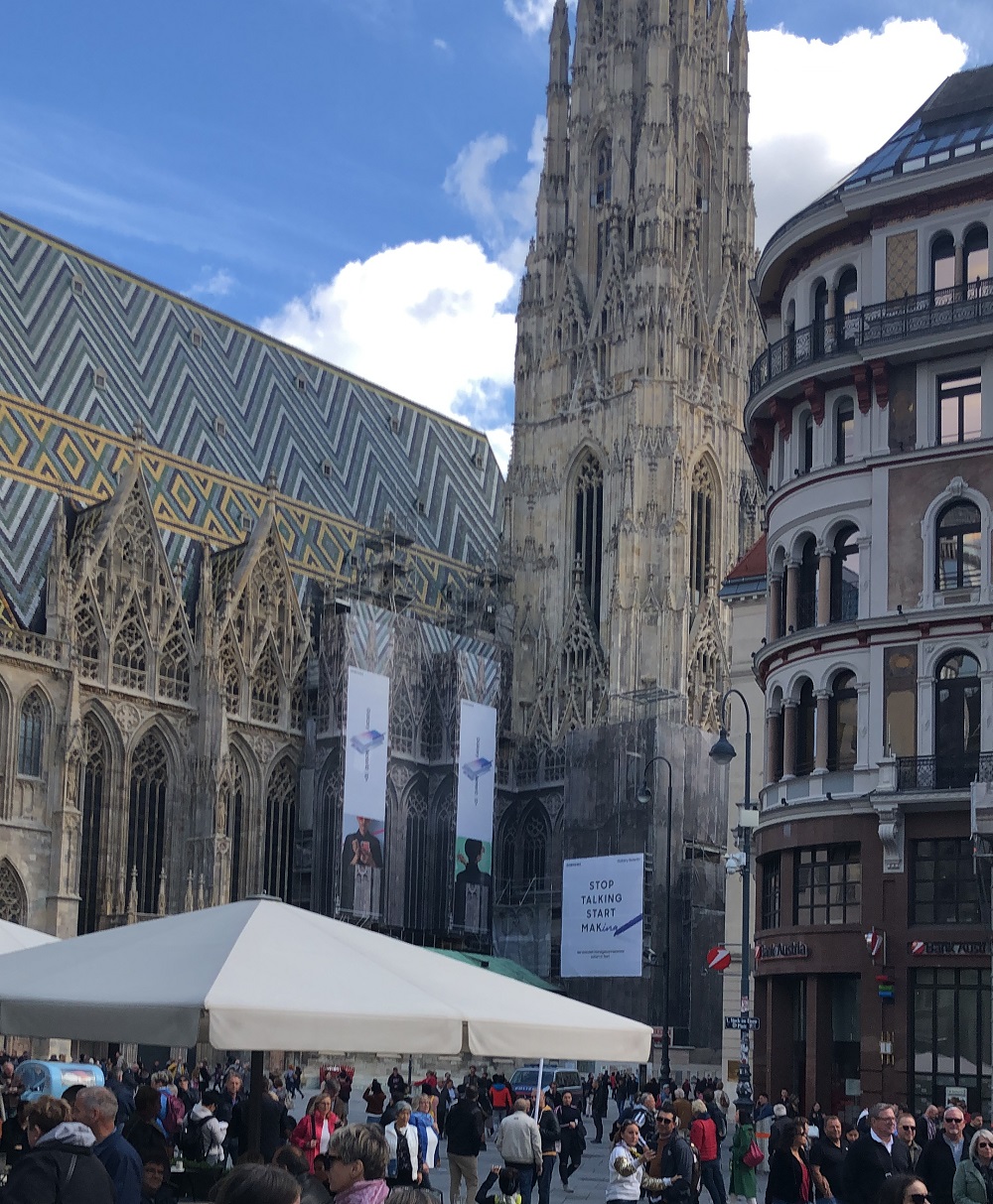 The first cryptologic sight was easy to find. A few meters right of the main entrance, the characters “O5” are written on the church wall. 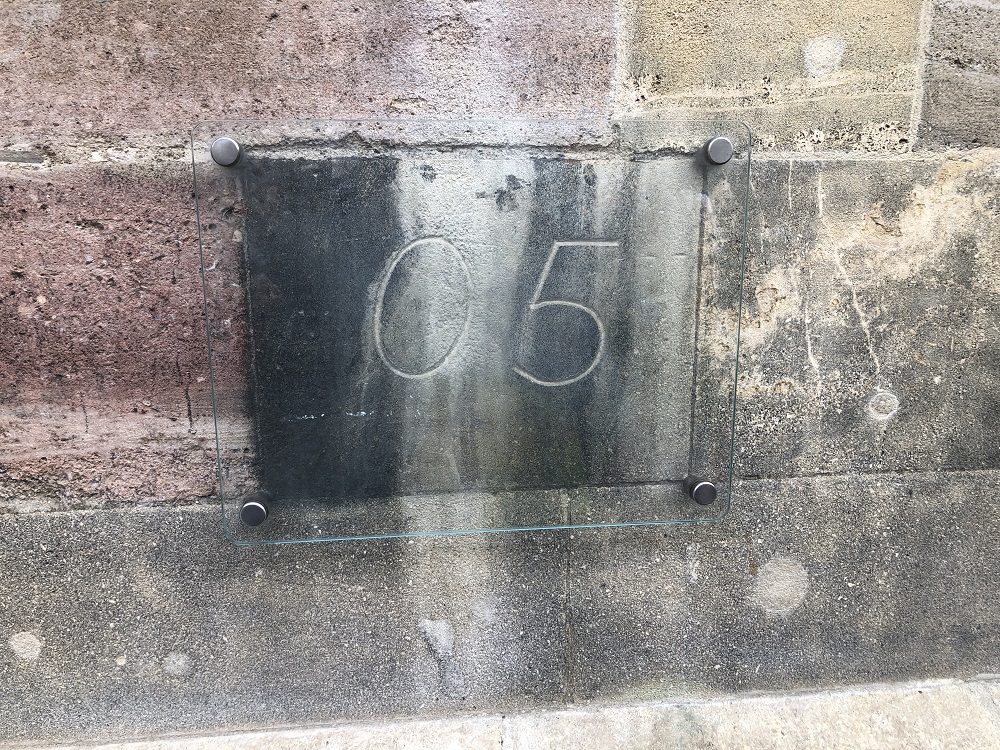 O5 (the “5” stands for the letter “E”; altogether this abbreviation means OESTERREICH) was the name of Austria’s most important resistance movement during the Third Reich. The O5 mark at the wall of Austria’s main cathedral is the most famous hidden message created during the Nazi occupation of Austria. It is a notable example of steganography.

To see the second crypto sight, I had to enter the cathedral. Inside the church, a symbolic grave (cenotaph) of Duke Rudolf IV, the builder of the church, is located. According to the following picture, this cenotaph bears an encrypted inscription: 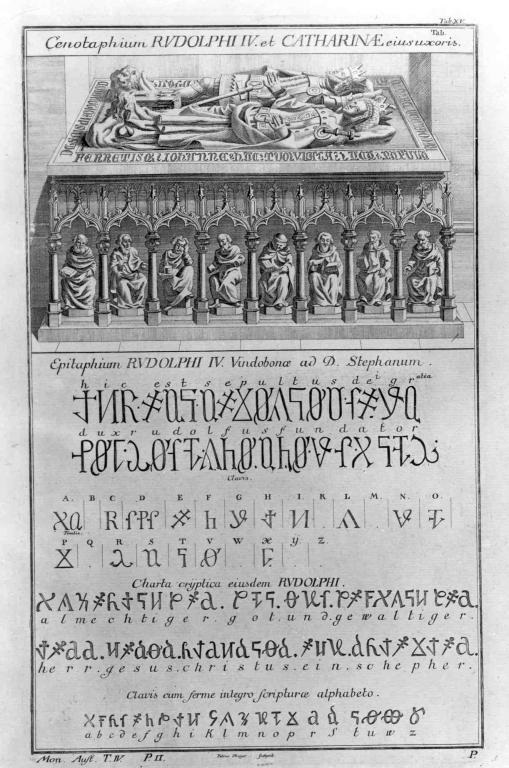 Apparently, the encrypted message is located at the top of the cenotaph. It is easy to see that it contains cleartext passages. According to Wikipedia, only Rudolph’s name and title are encrypted. The cipher used is the so-called alphabetum caldeorum. As I didn’t find much information about this encrypted inscription, I was especially excited to see it when I came to Vienna.

The cenotaph it was easy to spot in the cathedral: 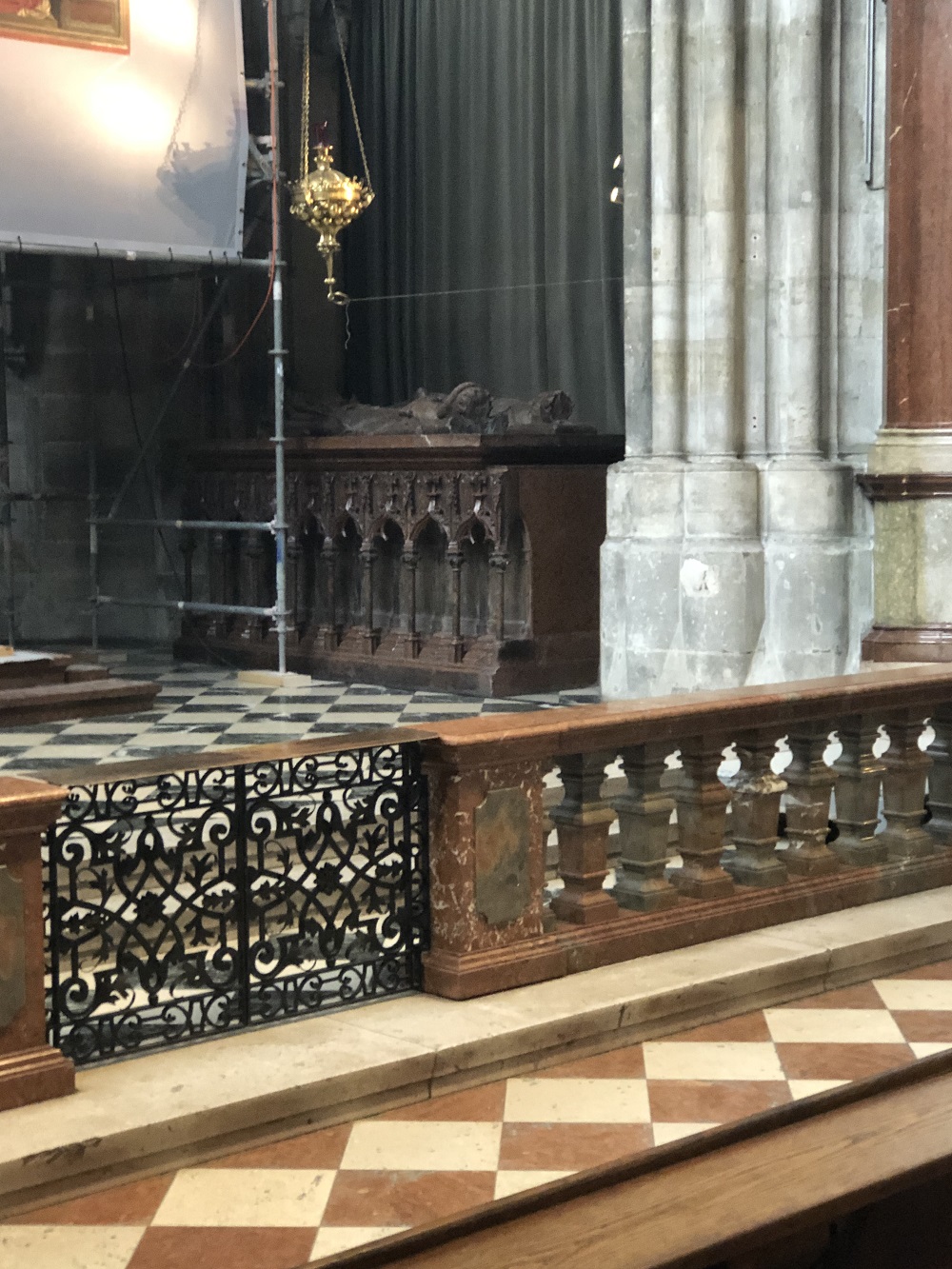 However, the area around the cenotaph was not accessible. So, I couldn’t get closer to it than a few meters. 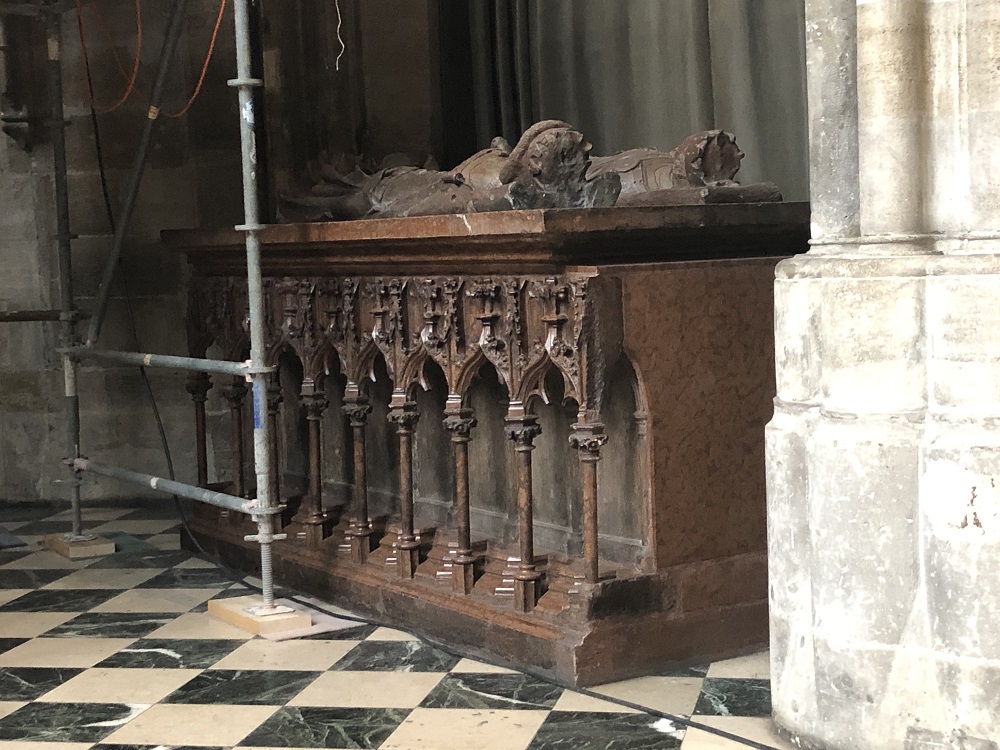 The inscription, which is on the top of the cenotaph, was not visible from where I stood. However, when I took a picture from a higher position using my selfie stick, … 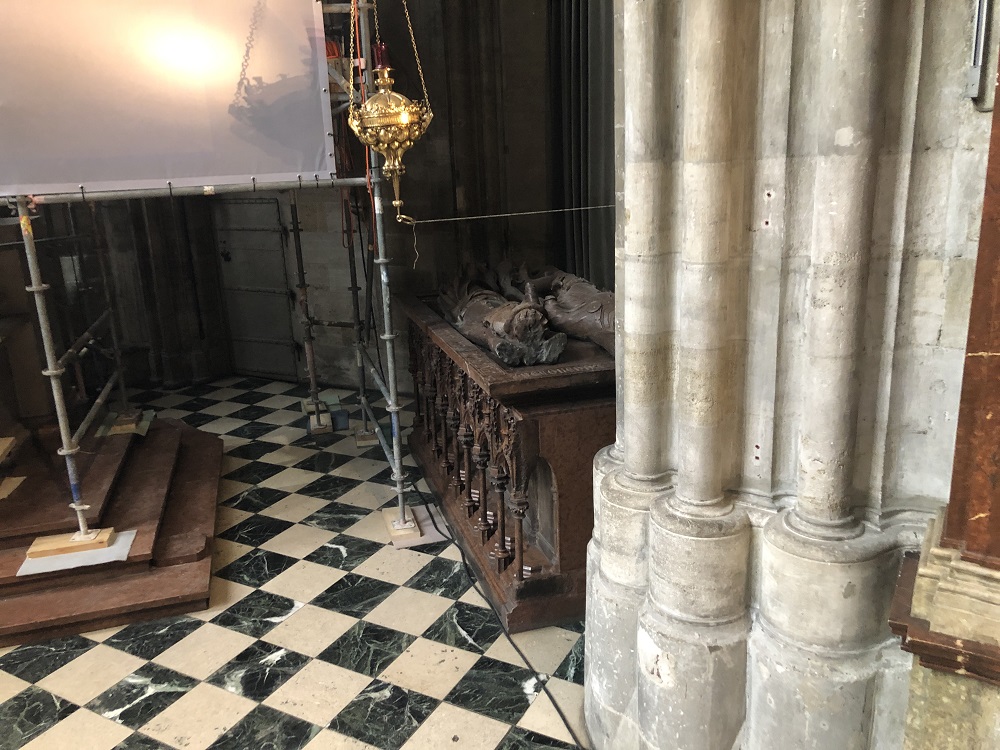 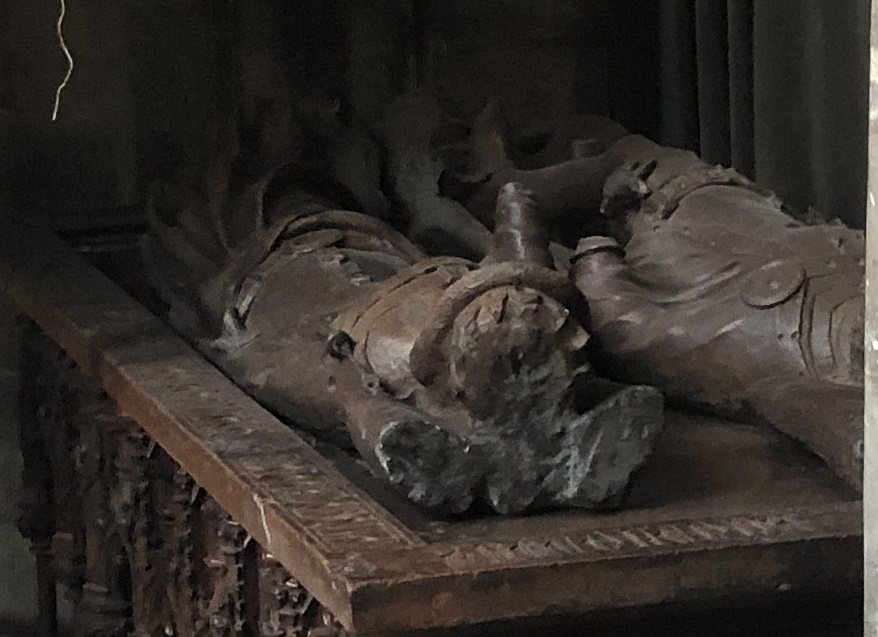 I wish I could present my readers a better picture of the cryptogram on the cenotaph, but I couldn’t take one. Apparently, not very many visitors of the St. Stephen’s Cathedral are interested in this inscription – otherwise, it would be possible to get closer to it.

If a reader has a better picture of this inscription, please let me know. A more detailed explanation of the message, including its cleartext and ciphertext parts, would be appreciated, too.

And of course, if you know other cryptologic sights I can include in my travel guide, I would be interested, too.
Follow @KlausSchmeh