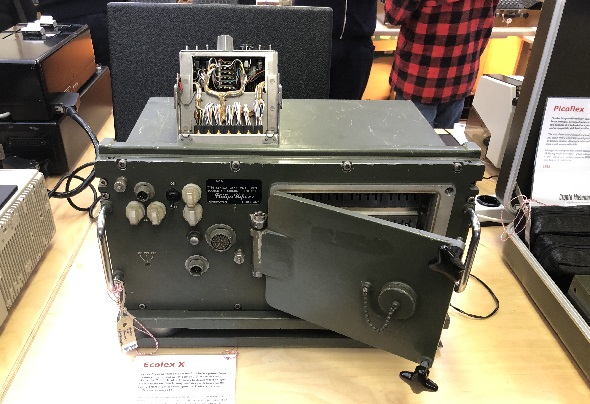 At the “Secret Communications 3” exhibition in Duivendrecht, NL, blog reader Karsten Hansky showed me a wired rotor similar to the ones used by the Enigma. It is probably of Russian origin. Does a reader know more about it?

Yesterday I attended the Secret Communications 3 in Duivendrecht, a cipher machine and spy gear exhibition co-organized by my Dutch friends Paul Reuvers and Marc Simons. 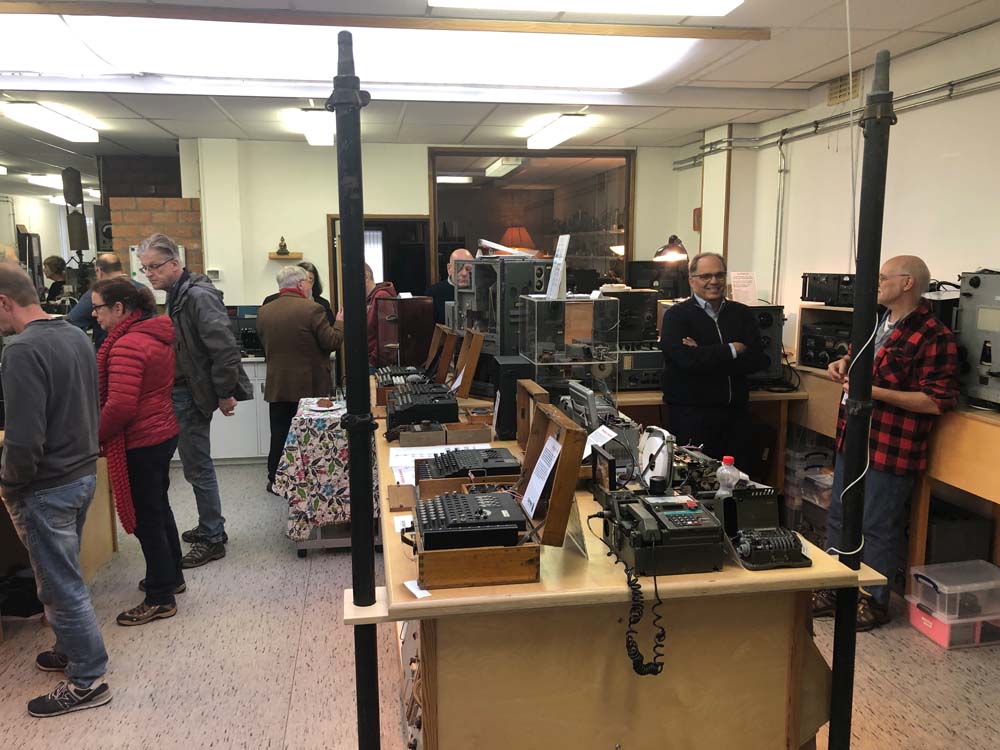 Paul and Marc are known as the operators of the Cryptomuseum website, a leading online source about cipher machines. A part of their impressive collection is on display at the Secret Communications 3. You have three more chances to go to there: Saturday 7 December 2019, Saturday 21 December 2019, and Sunday 12 January 2020.

Among the exhibits are two Siemens & Halske T52 machines, also known as “Geheimschreiber”. 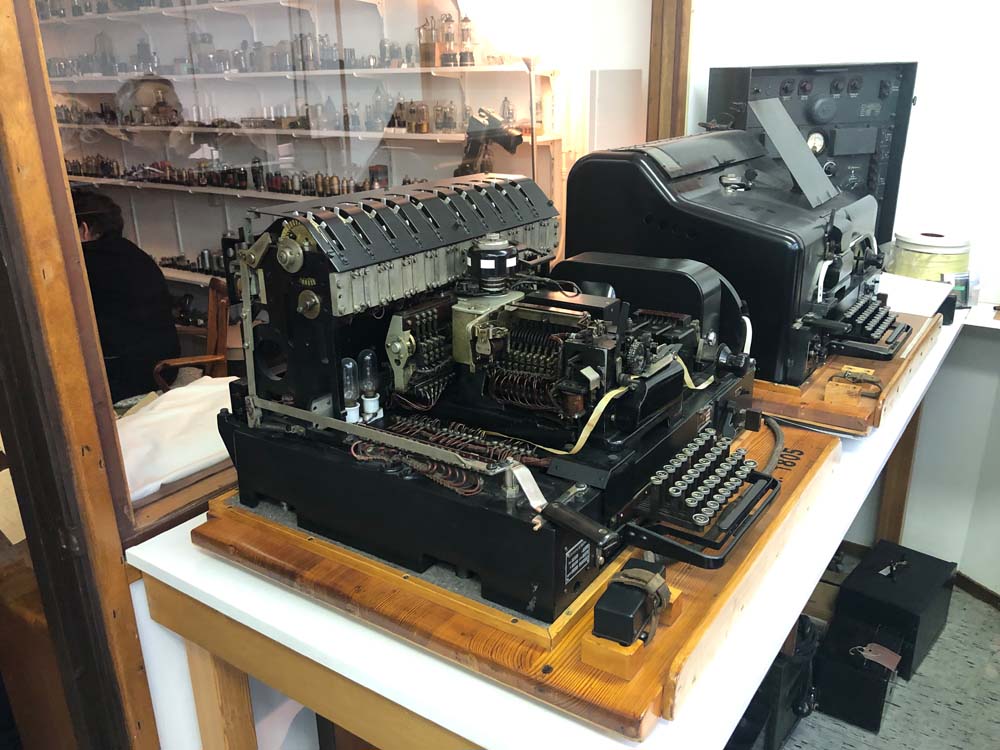 The T52 was used by the German air force in the Second World War. Swedish codebreaking genius Arne Beurling broke an early version of it. Contrary to the Enigma cryptanalysts in Bletchley Park, Beurling didn’t make use of codebreaking machines.

In addition, several Enigmas are on display: 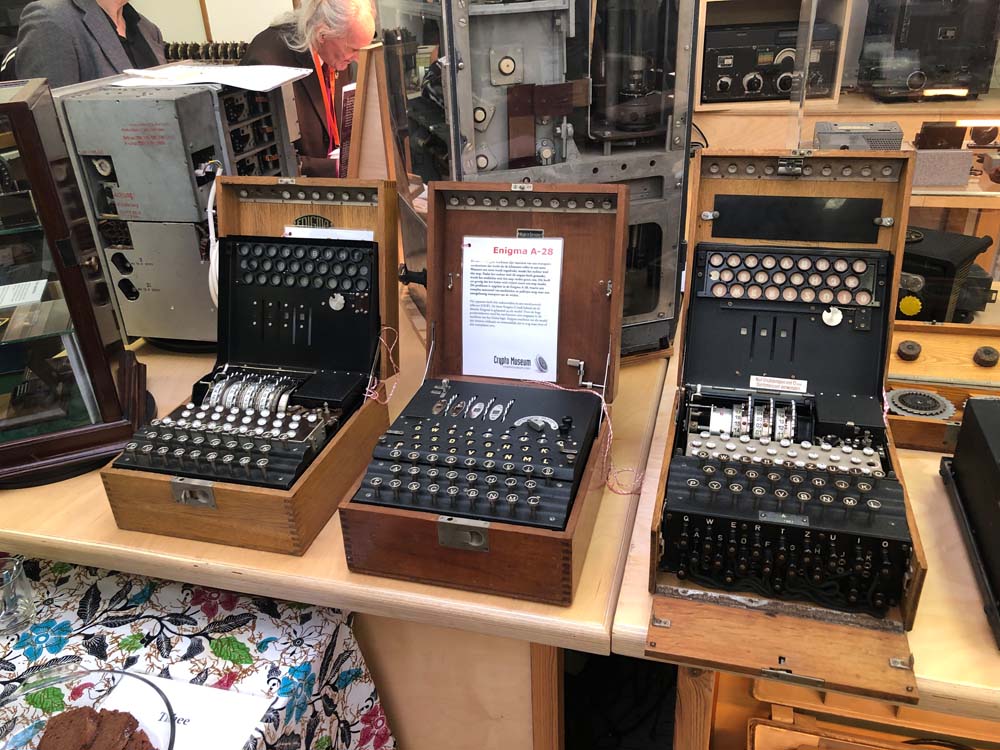 Among others, a commercial Enigma, an Enigma M4 (with four rotors), and a (Swiss) Enigma K are shown.

The Ecolex-IV is a Dutch one-time pad device from the Cold War era: 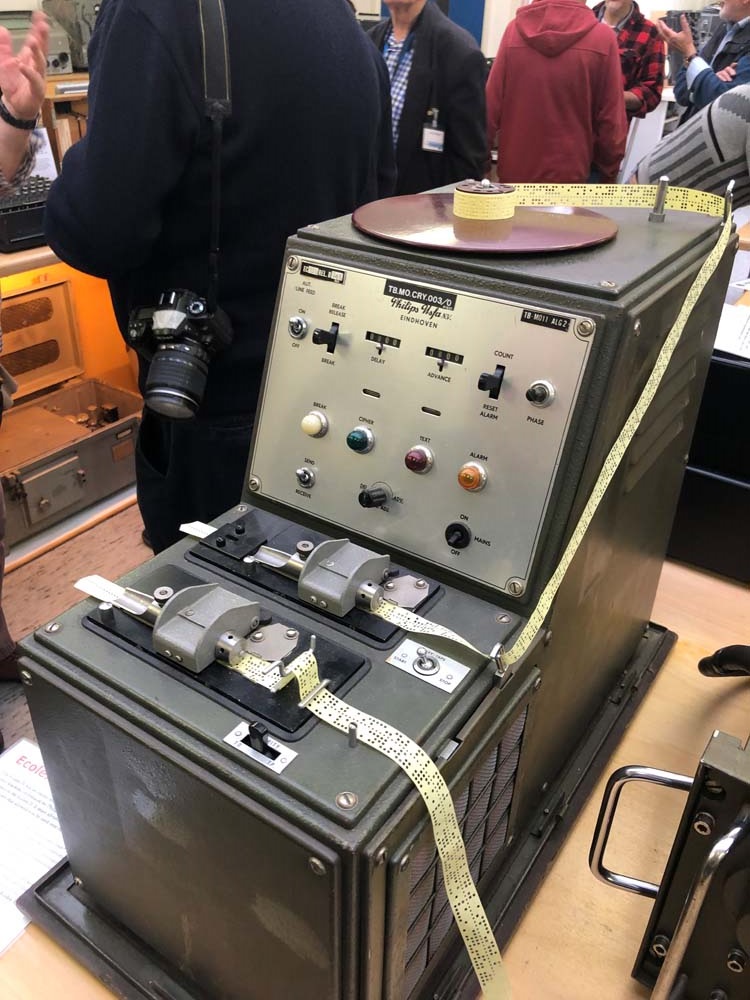 The key (i.e., a sequence of random numbers) is provided on a punched tape.

The following picture shows the Miniflex, a data encryption device integrated in a suitcase: 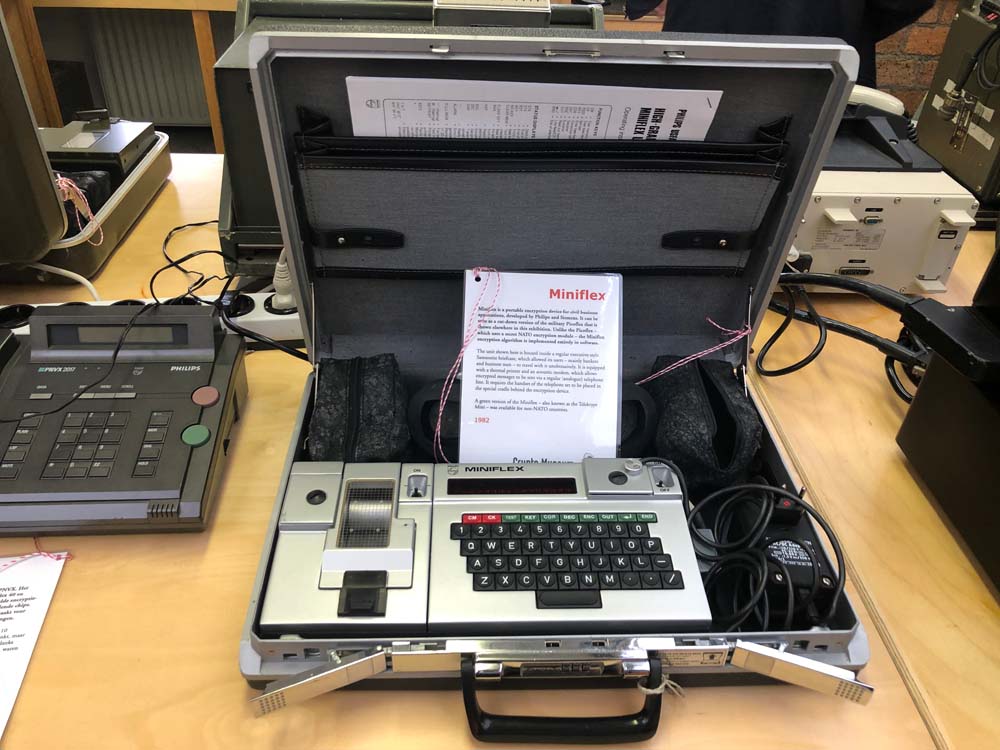 The Miniflex was developed between 1976 and 1982 by Philips Usfa in Eindhoven (Netherlands) in co-production with AEG Telefunken in Munich (Germany).

The Secraphone is an encrypting telephone: 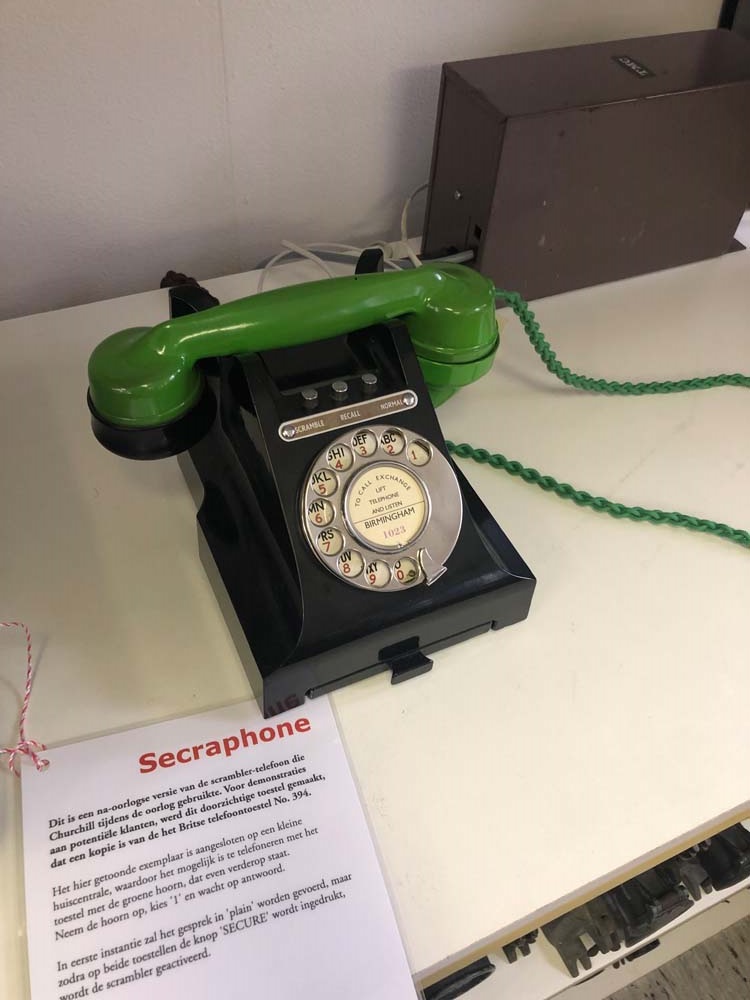 The Secraphone was developed in 1939 the UK and used during the Second World War.

Among the visitors was blog reader Karsten Hansky: 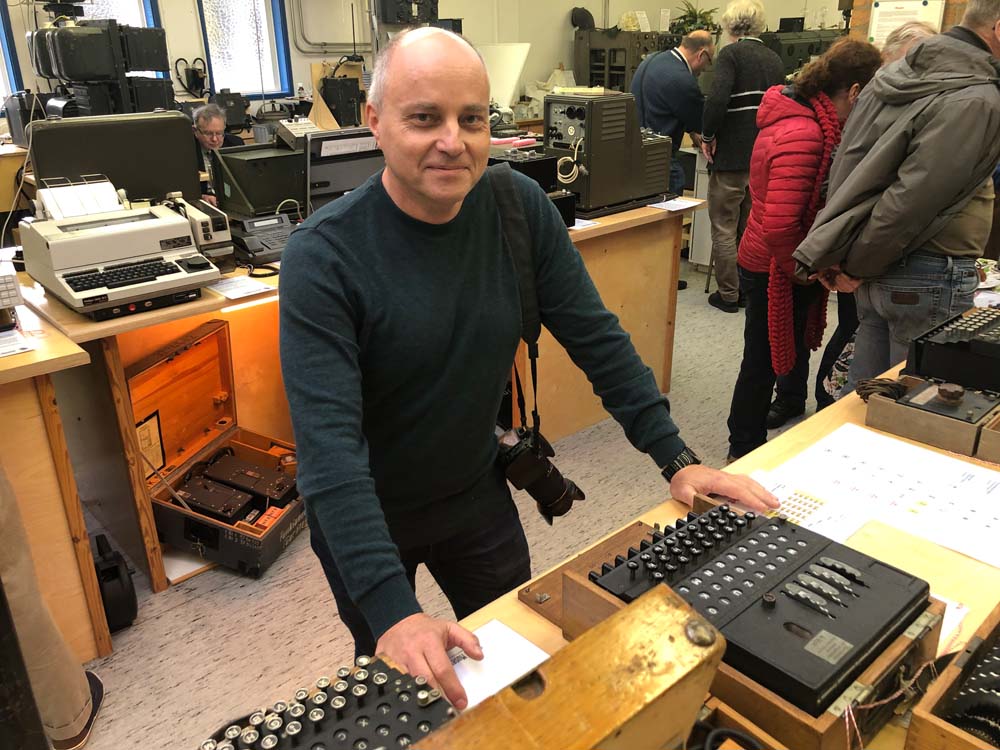 Karsten asked my a question I would like to forward to my blog readers. Let’s first look at the following encryption machine: 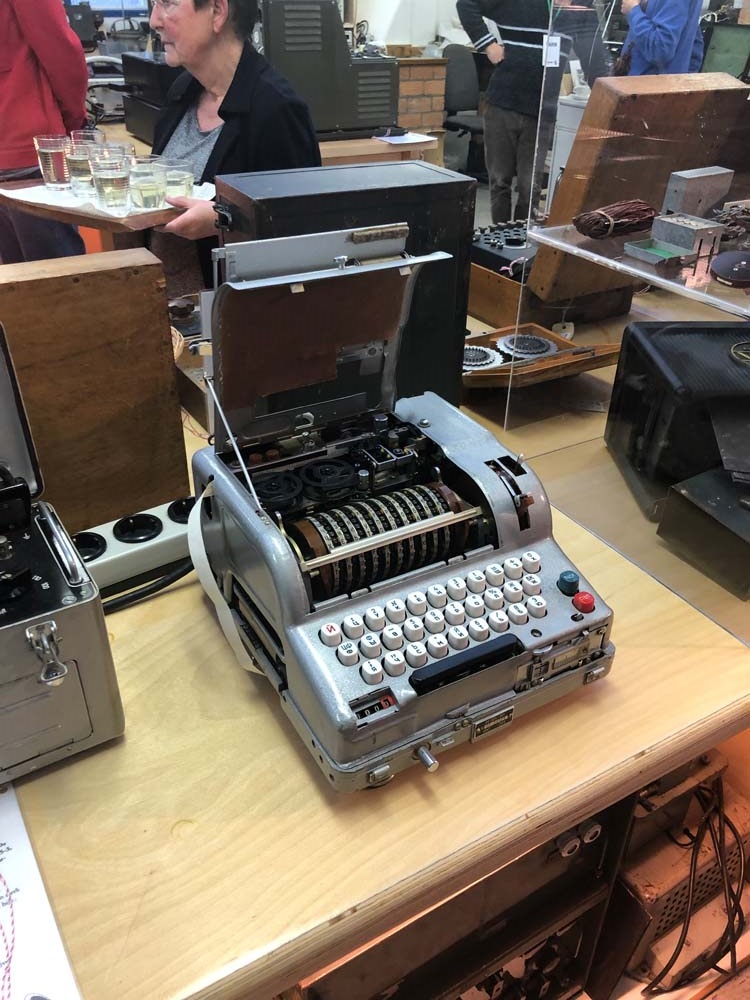 This device is a Fialka, a well-known Soviet rotor encryption machine. The following picture shows a Fialka rotor on the left: 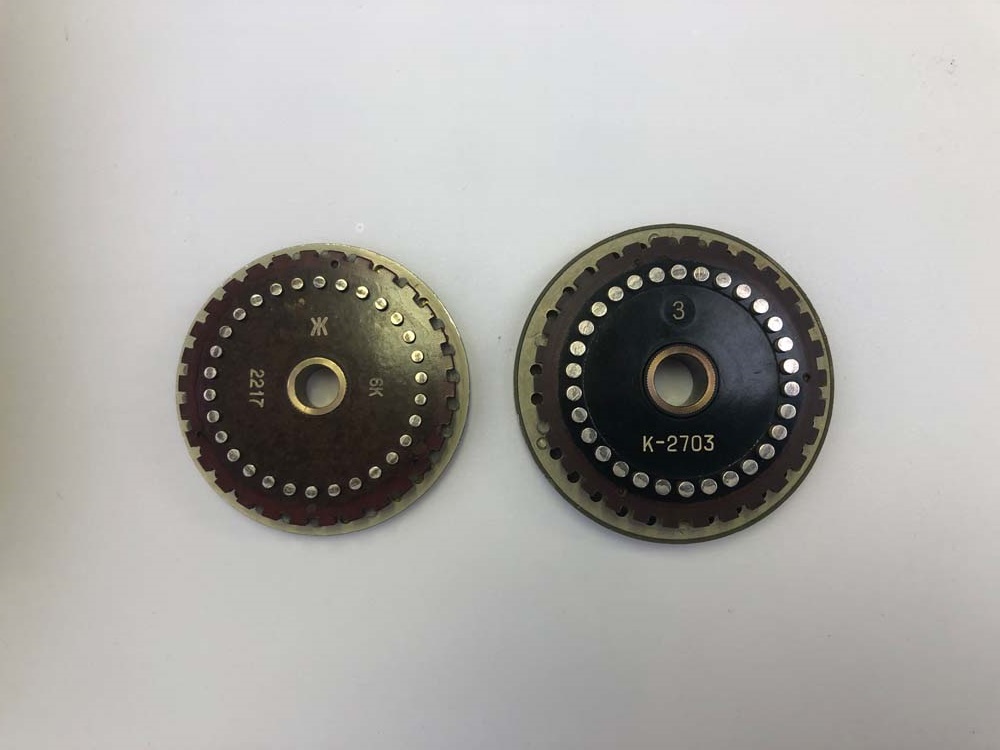 The rotor on the right-hand side apparently stems from a Soviet machine, too. It’s bigger than the Fialka rotor. Here are the rear-sides of the rotors: 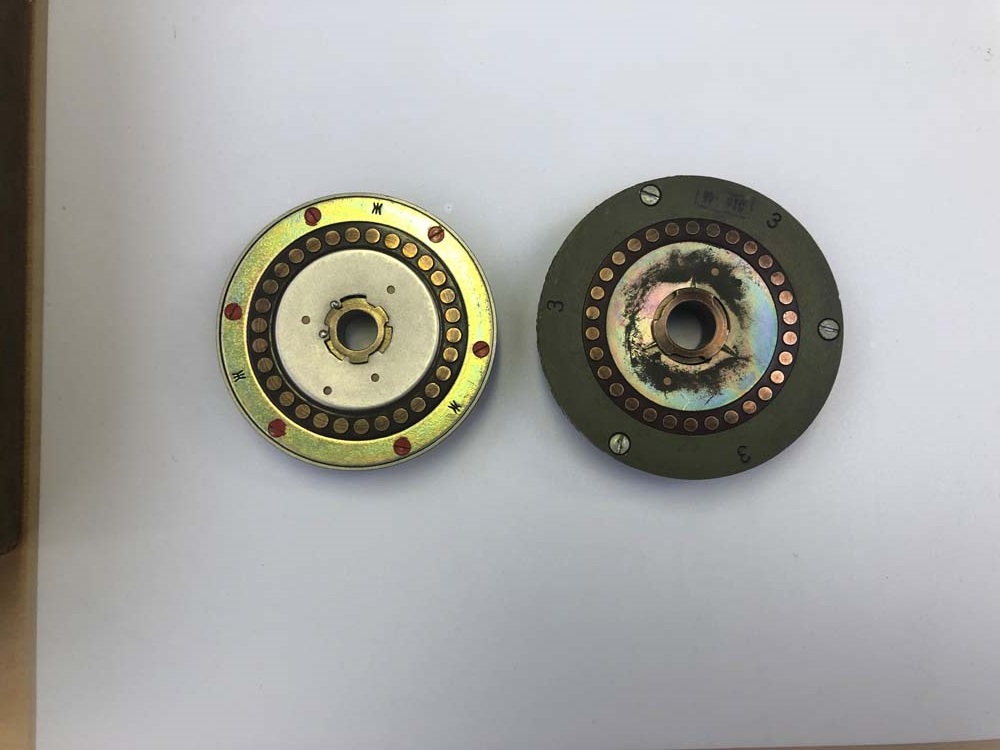 On the following picture you can see that both rotors have cyrillic inscriptions: 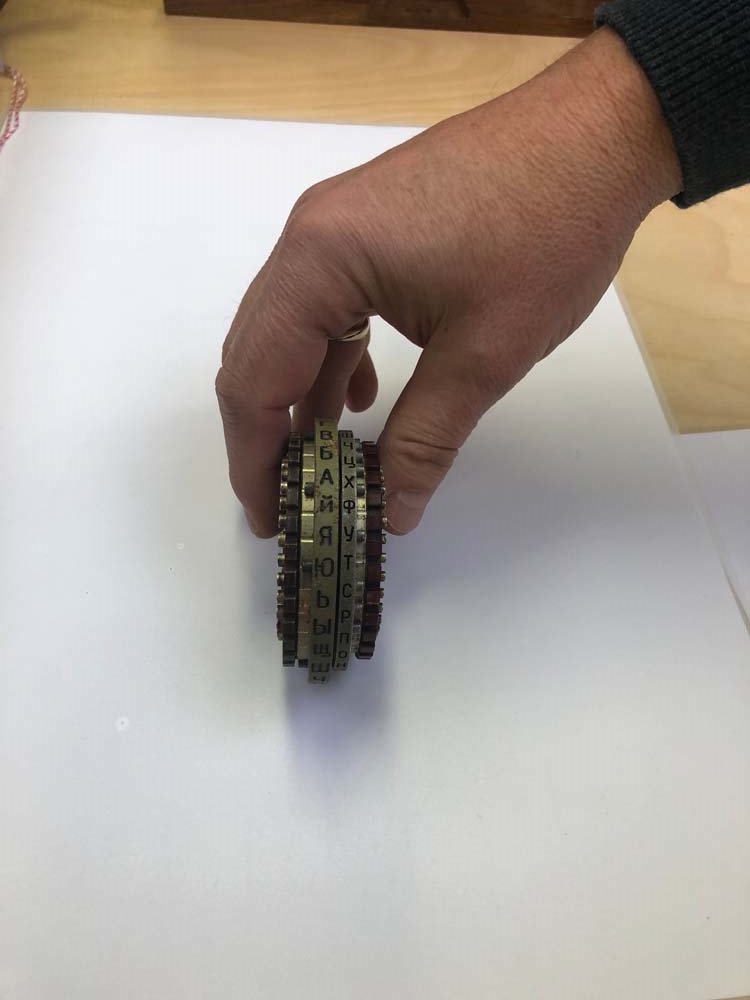 However, the spring-loaded contacts are on opposite sides.

Karsten doesn’t know where this rotor comes from. Does a reader know more about it?

Edited to add: In the original version of this article I wrote that the smaller rotor is the unknown one. This was wrong. In fact, the background of bigger rotor is unknown. For this reason, some of the comments referred to the wrong item. To avoid confusion, I deleted these comments. Sorry for the confusion.
Follow @KlausSchmeh