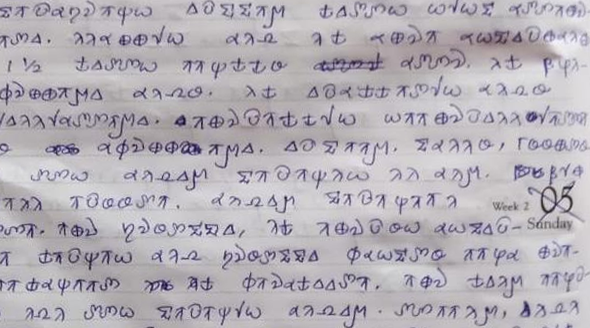 An encrypted diary recently posted on Reddit looks easy to solve, but so far nobody has broken it.

On my last visit to the r/codes group at Reddit, I discovered not only two encrypted sucide notes (I blogged about them last week), but also an encrypted diary I had never seen before. Encrypted diaries are a frequent topic on this blog. My encrypted book list contains about two dozens of them. As good as all of them are completely solved.

Contrary to most other encrypted diaries I introduced on this blog, the one I disovered on Reddit seems to be quite recent – probably even from the year 2020.

Of course, it’s always an ethical question whether one should encourage the deciphering of an encrypted document that might contain private information about people who are still alive. In this particular case (the encrypted document has already been published and studied elsewhere) I decided for introducing the diary on my blog, but I promise that in case the solution is found I will remove it from the comment section if it contains critical information.

Here’s the scan of the diary that was posted by a user nicknamed 21719 on Reddit:

21719 wrote: “Recently found a diary and the whole diary is written like this. Can any help with this?”

To my regret, nothing is known about the background of this cryptogram. As the message contains a cleartext passage (“Jan-05-Sunday”) written in English, it seems likely that the plaintext is English, too.

Apparently, many Reddit users tried to break this cryptogram, but to no avail. Some complained that the excerpt posted was too short for detailed analysis and that more text from the diary would be helpful. So, 21719 additionally published the following scan of a whole page: 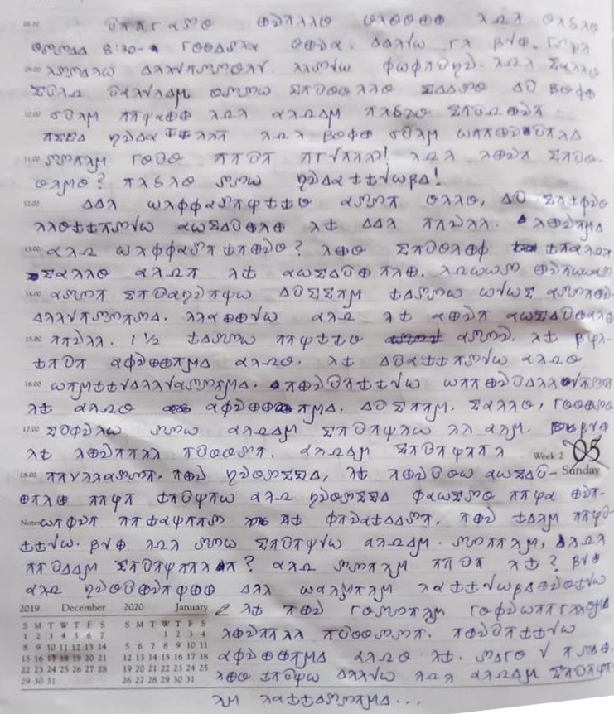 As already mentioned, virtually all encrypted diaries known in the crypto community have been deciphered. This is because diary authors usually prefer simple ciphers that allow for speedy encryption. The cipher used here doesn’t look especially complicated either. My first guess would be that the author has utilized a simple substitution (MASC), but apparently things are not this simple. On Reddit nobody has posted a solution yet.