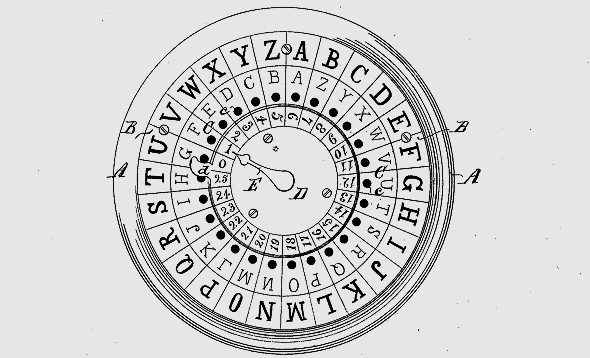 In 1877, US engineer Frank S. Baldwin received a patent for a cipher disk. Blog reader Matthias Brüstle has encrypted two plaintexts with this method. Can a reader break these?

Among the books in my shelf I consult the most often is Jack Levine’s United States Cryptographic Patents, 1861-1989. This work lists thousands of patents related to encryption technology, all of which are today available on Google Patents. Among the patents from Levine’s book I have covered on this blog is Marie Vahjen’s device for secret writing.

There is still plenty to discover, as only small parts of the crypto patent history have been researched so far.

A patent in Levine’s book I didn’t know until recently is a cipher disk invented by a certain Frank S. Baldwin from St. Louis, Missouri. When I searched for this name on the internet, I was quite surprised. Apparently, Frank Stephen Baldwin (1838-1925) … 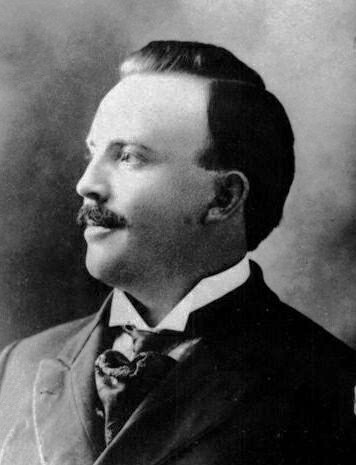 … was a notable US engineer who invented a pinwheel calculator in 1875. According to Wikipedia, he started the design of an improved machine in 1905 and was able to finalize it with the help of Jay R. Monroe who eventually bought the exclusive rights to the machine and started the Monroe Calculating Machine Company to manufacture it.

Baldwin filed his cipher disk patent in 1877. Blog reader Matthias Brüstle thankfully made me aware of it. 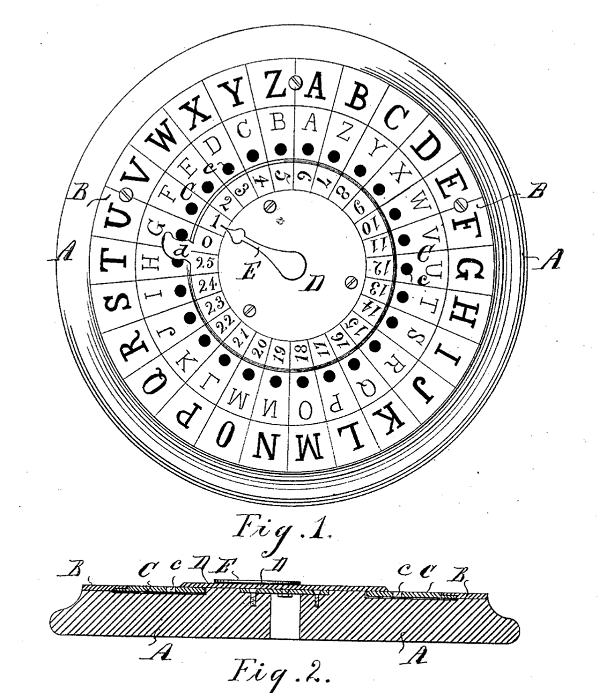 Badwin’s disk consists of three character rings. On the two outer ones (ring B and ring C), the alphabet from A to Z is inscribed; they are not movable. The inner ring bears the numbers from 0 to 25; it can be turned. The pointer in the middle is not relevant. Note that there is a hook connected to ring C between 0 and 25.

The following excerpt from the patent explains how Baldwin’s cipher works. The explanation is based on the key H 1 3 7 9 14 and the plaintext READ THIS: 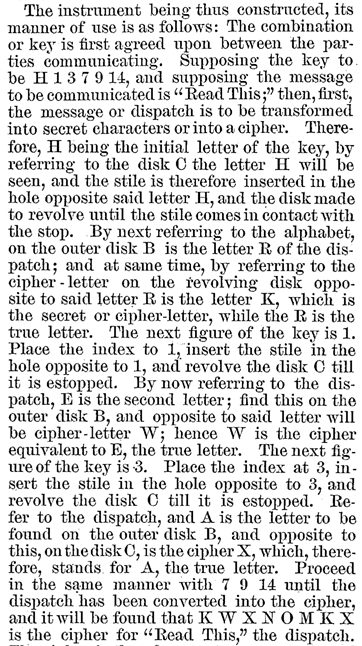 If the plaintext is longer than the key, the latter is repeated.

The method implemented by Baldwin’s device is similar to an autokey Vigenère cipher. Each encryption step is dependent on the previously encrypted plaintext. The key consists of a letter used as a starting vector as well as a series of numbers used as offsets.

Plaintext: NOW AND THEN AUGUSTA THOUGHT OF HER PRIZEFIGHTER

Matthias Brüstle has created two challenges based on Baldwin’s cipher disk. The plaintext language is English. The key was generated at random.

Challenge 1 (the key consists of a letter and six numbers):

Challenge 2 (the key consists of a letter and up to ten numbers):

Can a reader break these ciphertexts?

I want to thank Matthias Brüstle for informing me about this patent and for providing me these great challenges.
Follow @KlausSchmeh

Further reading: Can a reader help to correctly decrypt this WW2 message?