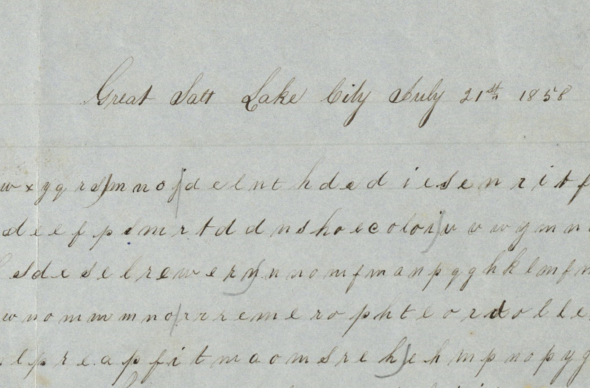 In 1858, an unknown sender sent an encrypted letter from Salt Lake City to an unknown recipient. Can a reader break this cipher?

… has now been published. Three chapters of it are avalable as a preview on Amazon. The BBC has published an excerpt on its website.

… and I will give a one-hour webinar presentation about crypto mysteries tomorrow (Saturday, December 12th) at 1700 UTC (6 p.m. German time). It’s free of charge. If you want to attend, please send me a mail. I will be happy to share the participation link.

A few days ago, Robert Simpson from the NSA’s National Cryptologic Museum contacted me. He forwarded me an inquiry from Kenneth L. Alford, a history professor at Brigham Young University in Utah, USA. During his research work, Ken has come across a two-page encrypted letter from 1858. This ciphertext is unsolved.

The said letter was sent during the Utah War (1857-58). Ken provided me the following summary of this conflict:

In  spring 1857, the newly inaugurated U.S. President, James Buchanan, ordered the Army to march on Utah and install a new territorial governor (replacing Brigham Young). The Army was ultimately commanded by Colonel (soon Brigadier) Albert Sidney Johnston (who would later die at the Battle of Shiloh, as the Civil War’s highest ranking casualty). The Army wintered at Fort Bridger (in present-day southwest Wyoming). The Army’s Utah Expedition marched through Great Salt Lake City on 26 June 1858, established Camp Floyd southwest of Salt Lake, and began a period of “reconstruction” until ordered to return to the east when the Civil War began.

In addition, Ken provided me a brief history of the encrypted letter:

Fifty years ago, the curator of the Yale Collection of Western Americana bought from an antiquarian book dealer a two-page, encrypted holograph letter dated “Great Salt Lake City, July 21, 1858″. The letter remained uncatalogued until recently, at which time the current curator in New Haven alerted Bill MacKinnon to its existence. Bill forwarded me a copy at the end of last week. This document has never been decrypted, and we know of no plans at Yale to do so. We are unsure who the author or intended recipient was. We’re also unsure of the subject, but are proceeding on the assumption that it’s connected to the Utah War.

The two pages of the letter are reproduced in the following. 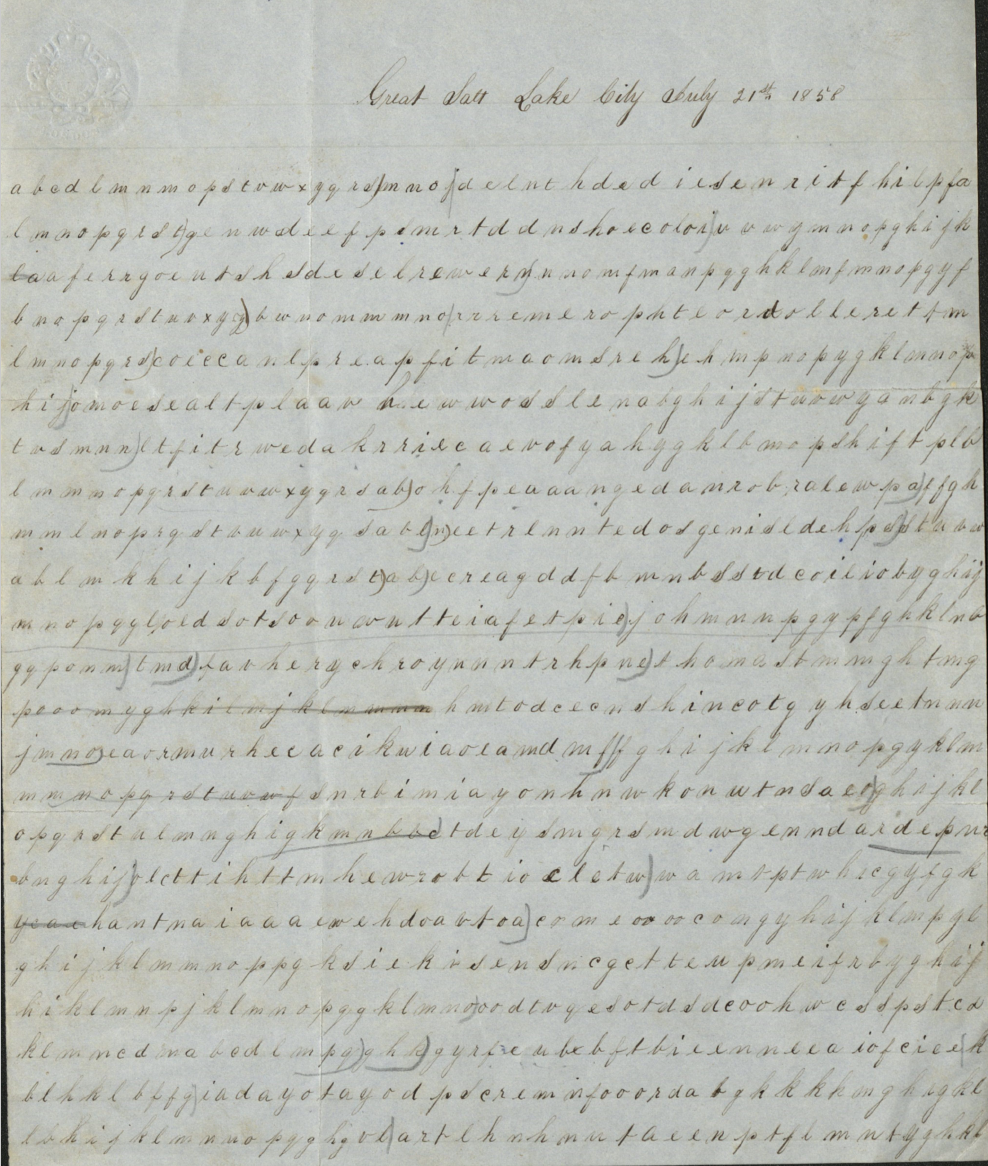 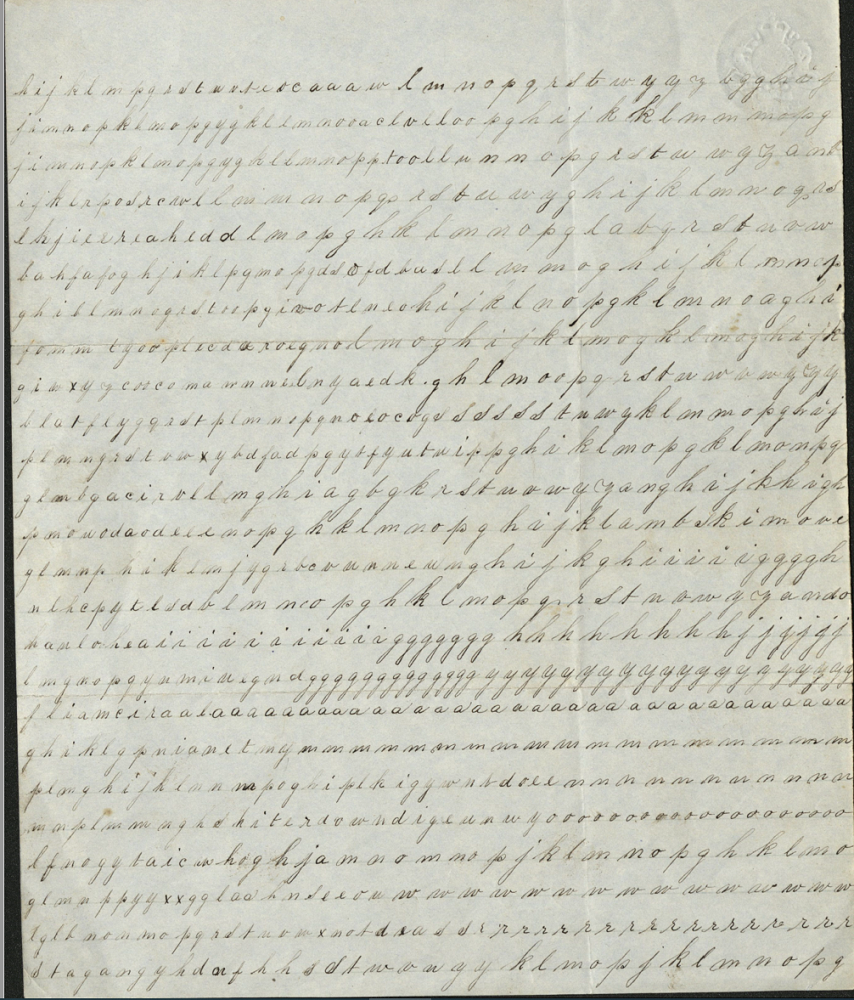 The first line of the letter starts as follows:

I would expect the fifth letter to be an E, but it’s an L, followed by M and N. This might indicate that a new word starts here. The same is true for STVW… So, my first hypothesis is that the first three words need to be read as follows:

What could ABCD mean? My first assumption was DEAR, which is probably the most popular starting word in a letter. However, the ciphertext B is not frequent enough to stand for the plaintext E (remember that the E is the most frequent letter in the English language). THIS would be another option.

And what does LMNMOP stand for? As there is a letter repetition in this word, we can use the word pattern searcher of CrypTool 2 to look for words that fit. In fact, CrypTool 2 delivered 143 words with the pattern in question. Assuming that the ciphertext letters for T, H, I, and S are already contained in the first word, many of these terms don’t come into question. Among the remaining ones are PALACE, DAMAGE, and NOBODY. I’m afraid, I’m on the wrong track.

What I find strange is that there is only one repetition in the first 17 letters. This is unusual. Interestingly, there are strikingly many repetitions on the second page of the letter:

Perhaps, these repeated Gs and As stand for numbers. Writing “aaaaaaaaaaa” is certainly easier than encrypting the word ELEVEN.

Can a reader find out more about this unusual encrypted message? If so, please leave a comment.
Follow @KlausSchmeh